The project is located within a three-mi. reach of the Lockport Lock of the Illinois Waterway River and is part of Chicago Sanitary Ship Canal (CSSC). 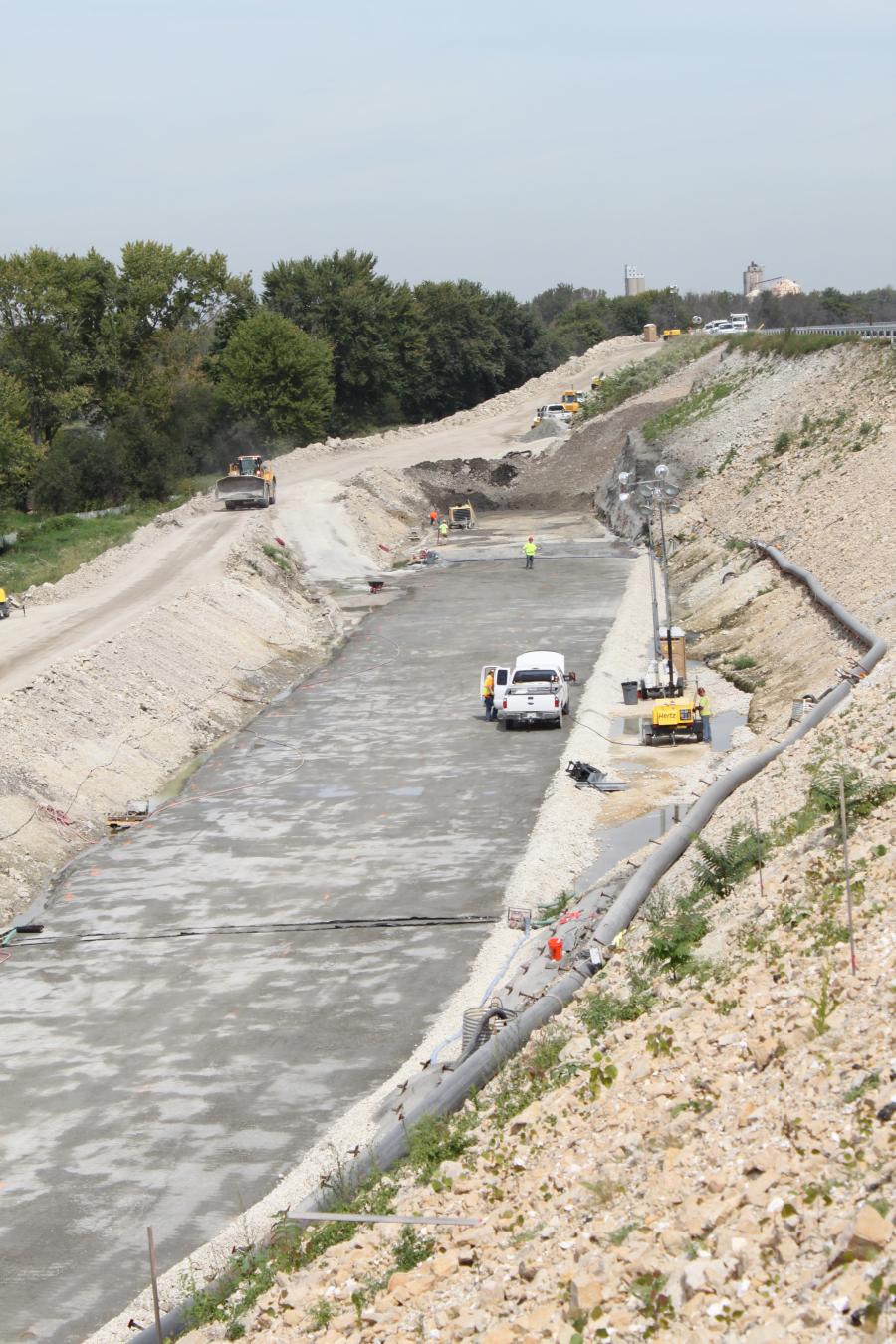 The U.S. Army Corps of Engineers (USACE) $150 million Lockport Lock and Dam, Upper Pool project is nearing completion as crews from ASI Constructors Inc. are working hard to deliver the final phase of the project.

The U.S. Army Corps of Engineers (USACE) $150 million Lockport Lock and Dam, Upper Pool project is nearing completion as crews from ASI Constructors Inc. are working hard to deliver the final phase of the project. Planning began more than 10 years ago when concerns were raised about the integrity of the various structures.

Stage 1-C (Forebay Wall), the last of the construction phases, will be completed in a few weeks. ASI, through a fast-tracked schedule, will finish two months ahead of schedule.

The Metropolitan Water Reclamation District of Greater Chicago (MWRD), through congressional action, transferred maintenance responsibilities of structures that maintain the Lockport Pool on the CSSC to the USACE in 1984.

The Lockport upper pool is a perched pool 38 ft. (11.5 m) above surrounding communities and the approach dike is on the right descending bank, with the canal wall on the left.

The overall project was divided into five stages: Stage 1 involved constructing a 4,300-ft. (1,310 m) cut-off wall within the embankment of the approach dike that leads to the powerhouse and Stage 4, which stabilized the powerhouse structure and cleared overgrown embankments. Stage 2 included repairing concrete bulkheads and replacing brick, limestone and granite facades in the controlling works. Stage 3 consisted of constructing 2 mi. (3.2 km) of precast concrete panel wall to replace the original walls of the canal. Stage 1-C, the final step includes construction of a new forebay wall behind the existing wall.

“For more than a decade, members of the Rock Island District have been working to design and implement one of the largest civil works projects ever completed in the District,” said Samantha Heilig, public affairs specialist, USACE, Rock Island District. “The Lockport Lock and Dam is a unique facility and it includes a lock, operated by the Corps; a powerhouse operated by the Metropolitan Water Reclamation District of Greater Chicago (MWRD); controlling works that regulate the water level in the CSSC; and an approach dike and guide walls that surround the elevated Lockport pool.

Michael Tarpey, project manager of the Lockport Upper Pool Project, said that these structures, which hold the canal pool at a level roughly 40 ft. (12 m) above the surrounding communities, served their purpose for more than 100 years, but that reliability and safety concerns in the late 1990s and early 2000s stressed the need for an upgrade. In 2004, a major Rehabilitation Evaluation Report (RER) was completed by the District to examine the condition of the Lockport facility and it identified four major areas of concern: the approach dike, concrete guide wall, controlling works, and powerhouse and dam.

In 2005 a group of senior engineers from the USACE conducted additional inspections of Lockport as part of a large investigation of lock and dam facilities around the country and it received a Dam Safety Action Classification (DSAC) rating of two out of five, which meant the facility was identified as being highly urgent as dams with such a rating could fail during normal operations or a failure could be initiated as the consequence of an event.

“The DSAC rating was a significant factor in this project receiving funding,” said Tarpey.

The District began moving forward on developing ways to improve the safety and stability of the Lockport structures.

“Upon completion,” said Josh Cackley, dam safety program manager of the Rock Island District, “the objectives will be met and the surrounding communities will have a more reliable and safer CSSC.”

The major concern with the final stage of the rehabilitation project was the integrity of the forebay wall leading up to the Lockport powerhouse, which is made of both concrete and earth, is approximately 40 ft. (12 m) high and separates the water in the CSSC from the water in the Des Plaines River.

“For years,” said Cackley, “the Corps has had concerns about water leaking through this wall.”

Each week, thousands of gallons of water have slowly worked its way through the wall, potentially carrying bits of soil and concrete via interior erosion. This gradual seepage has, over time, reduced the stability of the wall.

“Unlike traditional concrete walls that use forms to hold material in place,” said Heilig, “RCC allows layers of concrete to be laid one on top of the other until a desired height is obtained. Unlike conventional concrete, it is a drier mix, much like asphalt, and it's compacted in place with vibratory rollers. Using the RCC process, the new 40-feet high, 1,500-feet long wall, were built 12 in. at a time by a contracted construction team in about two months.”

“This was the perfect application for the use of RCC because it was a large scale project that would have otherwise needed a great deal more time and funding to complete,” said Andrew Goodall, project engineer for the forebay wall. “Using RCC we made building the wall simple, fast and economical.”

The old forebay wall was removed following the installation of the RCC wall, which contains approximately 80,000 cu. yds. (61,164 cu m) of RCC and required nearly 4,000 off-road dump trucks to place the material.

Dustin Bennetts, ASI-ECI's project sponsor started the planning for the project when the company was awarded the project in October 2014, but within weeks, the access bridge linking the mainland to the island where the work site was located, was de-rated from highway status to an eight-ton bridge.

“This was one of the biggest challenges,” he said, “and it meant that ASI-ECI couldn't get anything sizable to the project outside of a pick-up truck and a trailer.”

This made for a significant obstacle to get the project started. The first thing ASI-ECI had to do was plan and construct an alternate access, which was completed after careful planning and coordination via the low-level crossing in April 2015.

The work also required that the crews excavate a random rock embankment with a 12-in. (30 cm) random rock fill that was processed down to three inches. After approximately 86,000 cu. yds. (65,751 cu m) of excavation, crews cleaned and prepared the foundation with dental concrete. Once the foundation was adequately prepared the embankment was built back up with processed backfill concurrent with RCC installation.

ASI brought in a portable batch plant for RCC placement that was fed by aggregates brought to the site by barges through the shipping canal, and directed to the concrete plant by a materials handler and conveyer system. Approximately 80,000 cu. yds. (61,164 cu m) of RCC was manufactured and installed between September and November 2015.

Following the wall demolition, rip-rap was placed on the slope of the new wall, in addition general paving, guardrail, and electrical work in conjunction with general site cleanup activities.

ASI used primarily Cat equipment on the project: D6TI dozers, 349 backhoes, 328 and 308 excavators, as well as a 318 wheeled excavator 740 haul trucks and 966k loaders. Cranes were used to help set up the batch plant, manufactured by Johnson–Ross and redesigned and modified by ASI. Other equipment included a Komatsu backhoe.

ASI prefers to use as much of its own equipment as possible, and purchases its Cat equipment from Wagner Equipment.

An on site mechanic was part of the core 12-strong ASI crew and he was assisted by operators that had experience with repairs and maintenance. The John Deere equipment was serviced by the dealership.

The solid lines of communication between ASI-ECI and the USACE has been key to the project's success.

“Both teams did a good job working collaboratively to solve problems,” said Bennetts. “We came together for the good of the project and this is one of the reasons that allowed us to finish the project early. Starting late and finishing earlier doesn't happen very often — it's a good feeling when it occurs. This also applied to safety, which was paramount for all our jobs. The Army Corps has very stringent and specific safety standards that we had to uphold. As we near the end, we have achieved a good safety rating.”

Bennetts' also appreciates the efforts of his crew.

“Our entire team did a great job pulling the project together,” he said.