At Nearly $1B, New Correctional Facility to Be Largest in U.S. 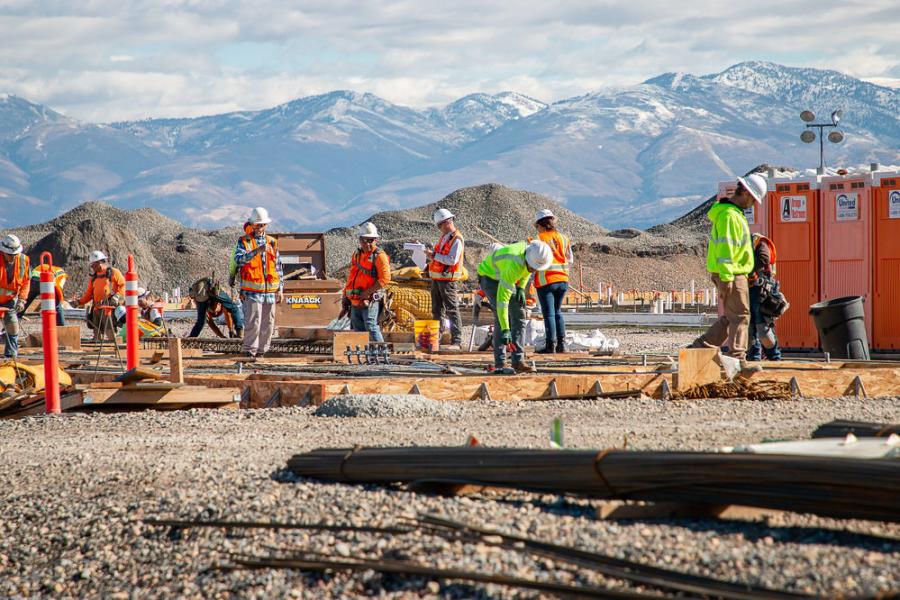 The team is currently tracking to substantial completion in the end of first quarter 2022, although the prison won’t likely open until late in the second quarter. (Jake Njord photo)

In Salt Lake City, construction crews are individually installing prefabricated cells, as work continues on a new prison that could cost $900 million to complete. The new Utah Correctional Facility will replace the current lockup in Draper, Utah.

"This project is the largest detention project in the nation," said Michael Ambre, assistant director Utah Department of Facilities Construction and management. "Detention facilities are never a popular project to build, but because of the planning and long-term goals to reduce recidivism, this facility will have a massive impact on this state for generations to come."

More than 200 people are working on the project, with multiple buildings under construction. The prison site is 1.3 million sq. ft. on 170 acres. 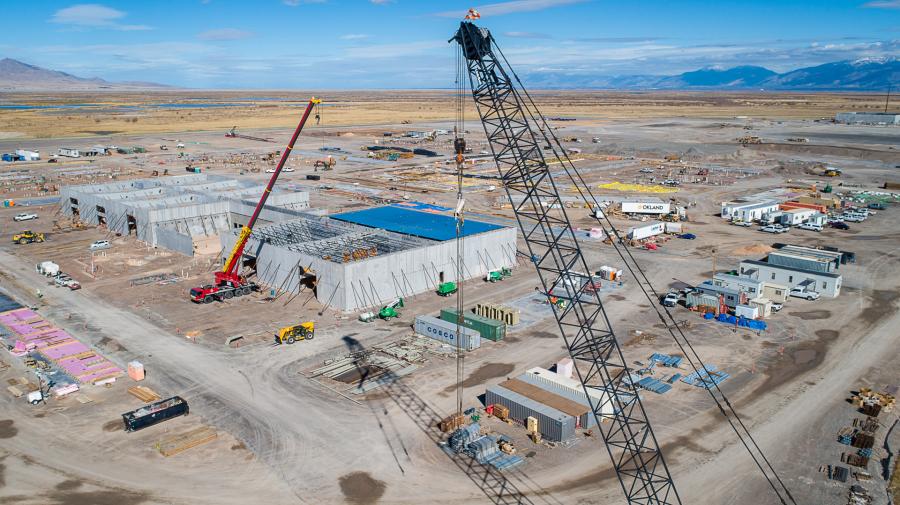 "There is a detailed operational plan to manage 3,600 inmates," said Ambre. "Currently, Utah Department of Corrections supervises inmates in an indirect model, meaning they monitor through cameras and screens. At this facility, the officer will be in and among the inmates' direct supervision. Studies show this reduces recidivism."

The site required great efforts to prepare it for construction. There will continue to be dewatering challenges, as crews work the underground.

According to Ambre, installing prefabricated cells one at a time is proving to be an effective approach in building the new prison.

"Anytime you can prefabricate building materials, both quality and schedule improve. Imagine three or four different subcontractors needed in an 8-ft. x 10-ft. space to finish the space. In a prefabricated scenario, all finishes are done in an assembly line fashion, then shipped fully fitted out to be picked and set."

The molds for the cells were transported to Utah from the eastern states to the Oldcastle/Amcor precast plant in Ogden.

"They are cast in the molds, and completely finished inside before they are shipped to the site. A two-cell unit is loaded, one per truck, at a weight of 66,000-plus pounds. They are escorted up the highway during restricted hours of the day."

Crews use a 350-ton crane for installation, with a short boom to maximize the capacity. The process is comparable to stacking Legos.

"They literally stack the second level on top of the lower level cells," said Ambre. "They are pinned together with a structural connection."

The majority of big concrete pours are large mat footings on which to set the cells. Each is 400-plus cu. yds.

Crews also are responsible for building a physical barrier separating the men's and women's units.

"As part of the American Corrections Association standards, there needs to be sound/sight separation between male and female populations; therefore, we comply. Very few, if any other, facilities exist that contain all classifications within one secure perimeter. This facility will have all classifications within one secure perimeter, making it unique." 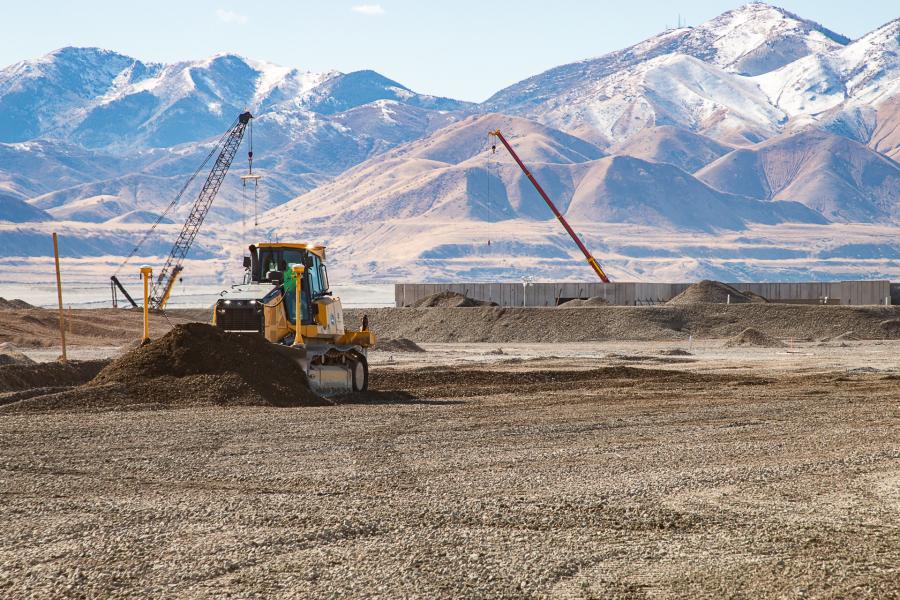 During the lengthy construction process, officials have had to deal with a series of delays and cost overruns.

"It has been extremely challenging and continues to be a challenge, due to the current construction industry in Utah," said Ambre. "There are material increases due to tariffs, and labor shortages due to the booming economic growth.

"In the construction world here in Utah, and across the United States, there is a shortage of skilled manpower. At peak, we could see as many as 1,500 workers daily at the site."

Ambre added, "Things are tough, but we are maintaining. Moving forward, we will struggle to get needed equipment and the labor force."

The team is currently tracking to substantial completion in the end of first quarter 2022, although the prison won't likely open until late in the second quarter.

"We are currently under construction on eight of the significant detention buildings. We have exterior walls up, and roof structures being installed on two buildings, where we will begin roofing within the next few weeks. Three additional buildings and large portions of the site have received bids, and the work will begin within the next 30-45 days."

The build-up of the overall site to the construction levels has already been completed, as well as installation of much of the underground sewer lines. Establishment of water mains and project access roads have also been addressed, with work at three utility lift stations under way. Crews also have temporary power to the site.

A significant amount of work remains. There are a total of 30 buildings, some of which are not as large and not as hardened as others. A number of them have yet to be bid and work started.

The exterior walls of nearly all the buildings are tilt-up concrete that are poured in two steps, with 4-in. special rigid insulation cast between the exterior and interior layers of the walls. The pouring and finishing take place on horizontal casting slabs, and then large cranes lift the sections and carefully swing them into place.

Weather has been a concern, but not a significant one.

"We had a short period of really wet weather, and then the most recent cold spell; however, the work is moving along well," said Ambre. "We have lightning software that alarms if lightning is within a half-mile of the site. All work stops and workers take refuge. Safety is our highest priority." 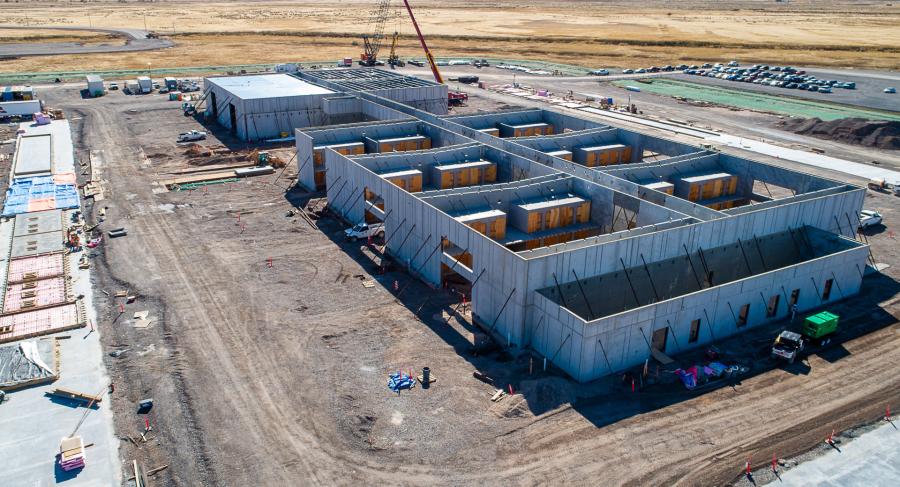 As for heading into colder temperatures, "We will work hard to get as many roofs installed, as soon as possible. We are preparing for winter with protection and temporary heat as needed. Most of the workmen are used to working year-round and as such are prepared."

Enhancing security also is part of the ongoing construction.

"The entire site perimeter will be bordered with 12-ft. high chain-link fence, with razor ribbon at the top and bottom. There are many sections divided by additional fencing. There will be a sophisticated security electronics system installed that will assist the corrections staff with security."

Construction milestones include the erection of walls, the installation of roofs and the completion of site utilities. Crews have imported just over 1.5 million tons of material to build up the site.

Layton/Oakland is the general contractor for the project. Big D/Kitchell is the managing consultant/project management.

According to the official website, a modern state correctional facility is needed to fully implement criminal justice reform by replacing a facility that lacks adequate space for treatment, rehabilitation, education and job-training programs that prepare inmates for reentry into society. The new structure will also use technological innovation and advancements in security systems that allow for more efficient management of the offender population.

As for the current facility, the site will be redeveloped, which is expected to generate an estimated $1.8 billion in additional annual economic output and $94.6 million in annual tax revenue for state and local governments. CEG