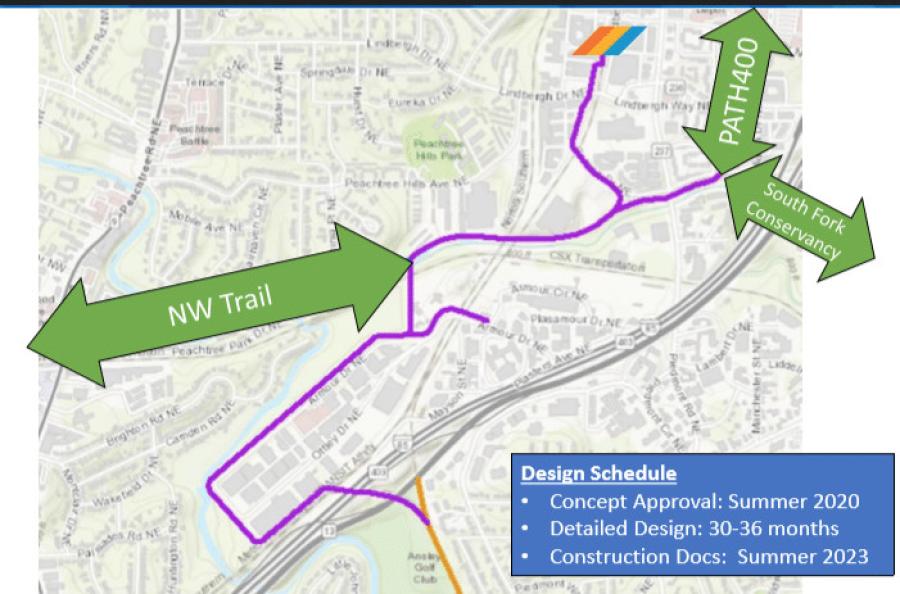 A map of the selected route for the Northeast Trail in southern Buckhead. (Atlanta BeltLine Inc. photo)

After years of planning, the Atlanta BeltLine's Northeast Trail finally has a course set through southern Buckhead, where it will connect to MARTA's Lindbergh Center Station, as well as the PATH400 and other trail systems in the city.

But the expense and complexity of its path, involving bridges and a tunnel, means construction will take several more years, with an opening likely coming no sooner than 2026.

"Good news is, they have an alignment. Bad news is, it will take forever," said Denise Starling, executive director of Livable Buckhead, the nonprofit supervising PATH400, as she described the conceptual route at a May 27 meeting of the Buckhead Community Improvement District.

The BeltLine is a proposed system of multiuse trails and an accompanying light rail mass transit line that would encircle intown Atlanta, largely using old railroad corridors. The transit has yet to be built, while several segments of the trail are already open, including the Northside Trail in Buckhead's Tanyard Creek and Atlanta Memorial parks area.

The Northeast Trail segment would connect the existing Eastside Trail from Monroe Drive in Virginia-Highland to Buckhead's Lindbergh Center Station.

Between Virginia-Highland and I-85, the Northeast Trail is routed along an existing railroad right of way. But between I-85 and Lindbergh, it must navigate a past a maze of uses. The Armour Yard railyard, the existing MARTA Red and Gold lines, PATH400, the Peachtree Creek corridor and the future Clifton Corridor light rail line are among those complexities.

Atlanta BeltLine Inc. (ABI) held a community meeting last summer to show five alternative routes through Buckhead. The final choice, unveiled May 14, is a variation on what was called "Alignment B."

In southern Buckhead, the alignment of the BeltLine trail, along with the transit line, would split at an existing Y-shaped branching of the railroad at Ansley Golf Club, where rail bridges cross the Buford-Spring Connector. The transit line will use the northern branch of the Y and run on existing railroad right of way directly to the MARTA station.

The Northeast Trail will use the southern branch and begin its meandering course through the neighborhood. After crossing I-85 and the rail line, the trail route follows the perimeter of the commercial district and follows Peachtree Creek's course before running along Garson Drive to the MARTA station.

One of two spurs of the route passes along Adina Drive to connect to PATH400, which in turn connects to the South Fork Conservancy's Confluence Bridge and a trail network intended to link to Brookhaven's Peachtree Creek Greenway. The Northeast Trail eventually would connect to another BeltLine segment, the Northwest Trail.

ABI doesn't expect its construction to begin until 2023, with a likelihood of two to three years for completion, said an ABI spokesperson. The budget is unknown, she said, but it will probably be ABI's most expensive section so far.

At last year's community meetings, consultants gave a broad estimate of $10 million to $15 million per mile to build the trail in that area. The chosen alignment is roughly 2.5 mi. long.

Starling expects the BeltLine would not open until 2026 or 2027, much longer than she had hoped for connections to PATH400.

In the meantime, work has begun on the section of the Northeast Trail south of I-85. Georgia Power is working there and is set to pave a section of the path.