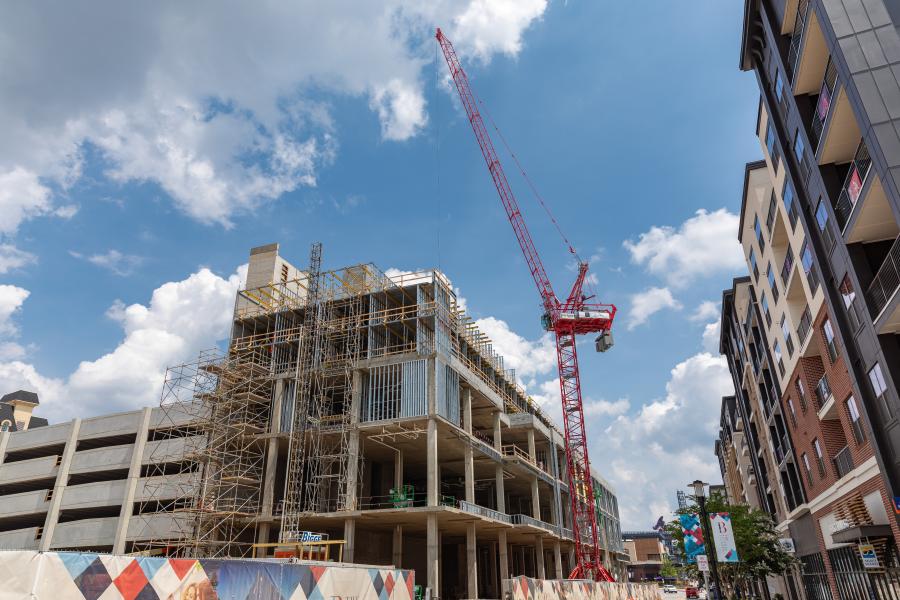 The Battery Atlanta is an ambitious mixed-use real estate development by the Braves Development Company, anchored by SunTrust Park, new home of the Atlanta Braves. The 1.5-million-square-foot site has reached 90-percent capacity with the recent groundbreaking of the 143-room Aloft Hotel. Choate Construction of Atlanta has the contract to build the Aloft Hotel, Silverspot Cinema, retail and the 4 Ballpark Center loft office development, which includes a new 536-space parking deck. It called on ALL Crane Rental of Georgia Inc., a member of the ALL Family of Companies, to provide the tower crane for construction.

"We're really proud of this job because The Battery Atlanta is such a prestigious development and the mixed use project has allowed us to flex our muscles in providing support beyond equipment," said Daniel Branscum, ALL Crane Rental of Georgia's sales representative.

"In a majority of vertical construction, we use hammerhead towers because there is no issue with the ability to freely swing across the site," said Branscum. "With the Battery, because so many shops and residences, along with the stadium, are already open, we needed to tighten up that swing."

A typical tower crane has a long, horizontal boom with a radius that, by design, extends across the entire job site. The hook travels in and out along a trolley, but the boom remains fully extended. Conversely, a luffer pivots up and down at the top of the tower, allowing the operator to fluidly move the radius — and the hook — as the crane is lifting.

"Picture the swing area as a circle over a square, the square being the mixed use building site," said Sam Moyer, general manager of ALL Tower Crane. "Anywhere the circle exceeds the edge of the square, we need to move the radius inward to stay inside the lines. Picking at 197 feet, the boom angle is at 15 degrees. When the operator is swinging and needs to set the load at 90 feet, he booms up until the angle is at 65 degrees and sets the load."

There was another challenge to overcome with the size of the job site — and its multiple utility and existing vehicular travel paths. The tower crane had to be mounted on a ballasted base.

"There was no room for a traditional base, so we engineered a ballasted base in which two of the legs tucked under the footprint of the building, and the other two legs are placed between the foundation and the street. It gave us the clearance we needed," said Branscum.

Moyer added, "The ballasted base allowed us to distribute the vertical downward reaction across all four corners. We put down four foundations, one for each leg, which took that vertical load and distributed it to the soils. It was an ideal solution for the ground conditions present."

"Georgia is one of the many states where we're licensed to perform engineering services, and I was happy we came up with a solution for the customer," said Branscum. "It's rare to have either a luffing tower or a ballasted base on a construction site, so having both makes this unique."

Throughout construction, the Braves Development Company intends to light up the Potain MR 418 tower crane in team colors each night. The mixed use site is scheduled to deliver next year.

For more information about The ALL Family of Companies, call 800/232-4100 or visit www.allcrane.com.

ALL Crane ALL Family of Companies Cranes Georgia