More than 300 local residents gathered at the Bridgeport Conference Center Dec. 6 for a construction expo on the Atlantic Coast Pipeline. 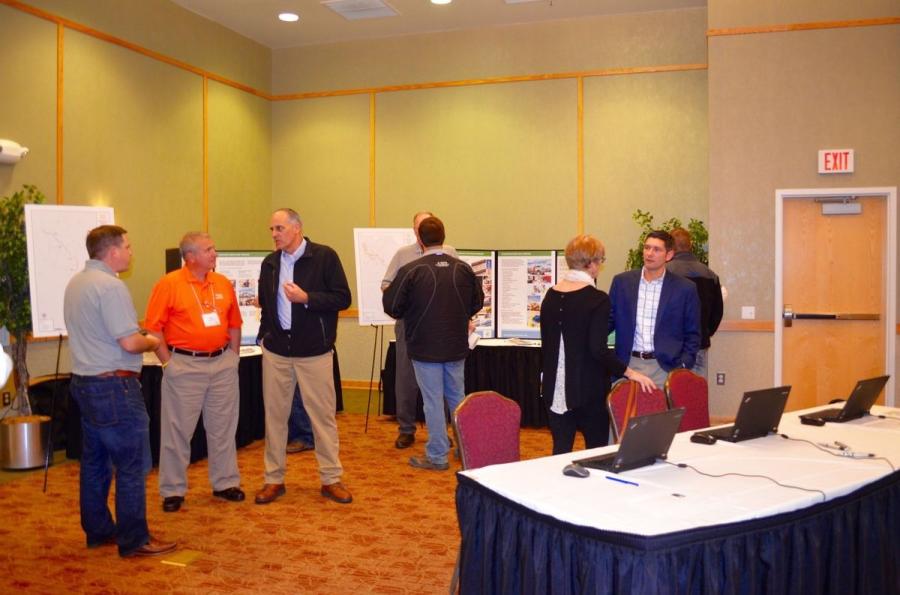 Visitors to the expo could speak with representatives from Spring Ridge Constructors about the Atlantic Coast Pipeline project.

The pipeline is a project of Dominion, Duke Energy, Piedmont Natural Gas and Southern Gas Company, which together have formed Atlantic Coast Pipeline LLC.

Construction is expected to begin in 2017 and continue into 2019, with the pipeline going into service in late 2019.

The pipeline will begin in Harrison County and pass through Lewis, Upshur, Randolph and Pocahontas counties before entering Virginia.

The project will also include three compressor stations. The first will be located in Lewis County, the second in Buckingham, Virginia, and the third near the border of Virginia and North Carolina.

Aaron Ruby, a spokesman for Dominion, said the expo was one of seven events that Atlantic Coast Pipeline LLC will host, each taking place in communities that will be impacted by the pipeline.

“This is us introducing ourselves to the community,” Ruby said. “And we want the community to introduce themselves to us. This project will create a lot of different job opportunities, and we're hoping to fill at least half of those, if not more, with local contractors. There's not a business in the community that won't be impacted positively by this project.”

The expo provided information to local contractors, businesses and union representatives about what services would be needed during pipeline construction.

The expo also allowed let contractors, businesses and union representatives to enter their information on a website to create a database of potential contractors.

Nancy Miller, a contractor for Dominion, provided information about services that will be needed during construction.

“We'll need a wide variety of services during construction,” Miller said. “Not only are we looking for subcontractors who can provide things like materials, security, tools, and sanitation services, but we're also looking for community services for our workers, like banks, barbers, grocery stores, lodging, and restaurants.”

“We had over 100 vendors add their information to our database to help us support this project,” Ruby said. “We couldn't be more thrilled with the interest this event has created and the response we've had from the community.”

“We also want to make sure that local unions are aware of what will be needed, so they can be aware of what kind of training workers will need,” Ruby said. “We want everyone who is interested to be ready for this opportunity.”

Also present were representatives from the EnergySure Coalition, a group of more than 220 businesses, organizations, and individuals across North Carolina, Virginia, and West Virginia that is standing up for reliable energy in the region. Representatives offered pamphlets to visitors to sign up and join the coalition and receive information on the Atlantic Coast Pipeline.

“Within these four companies is a very in-depth history of pipeline construction and expertise,” Plume said. “There aren't very many contractors in the country capable of handling this large of a project on their own, so we came together and formed Spring Ridge Constructors. We're very happy for the opportunity to work on this project.”

Plume said the construction of the pipeline was broken up into segments, called “spreads.” The spreads are all varying lengths, dependent largely on the terrain that they are going to be built on.

“We expect to begin construction in November of 2017,” Plume said. “The first part of that is going to be mostly clearing trees and preparing the sites. Then around May of 2018, we'll start on the first half of the spreads for the pipeline, working simultaneously in different areas. Then, in 2019, we'll finish the second half of the spreads and by late 2019 we expect the pipeline to be in-service.”

“The companies are competitors,” von Borstel said. “We compete over other projects and try to outbid each other, so it wasn't something that happened easily. The first conversations started probably two years ago.”

“This isn't just a bunch of guys going out to lay down a pipeline,” Bermack said. “This is a team of hardworking and established professionals who are going to do this job correctly.”

Atlantic estimates the impact of the pipeline construction to be around $2.7 billion in economic activity and $4.2 million in annual local tax revenue. They also estimate that construction for the pipeline will support around 17,000 jobs. Approximately 50 percent of craft and trade workers will be hired through local unions.

“This is one of the largest capitol investments our state has seen,” said Ruby. “So we want to make sure that money does good in our communities.”