Atop an Ozark Mountain, Mansion is Built for Millennia 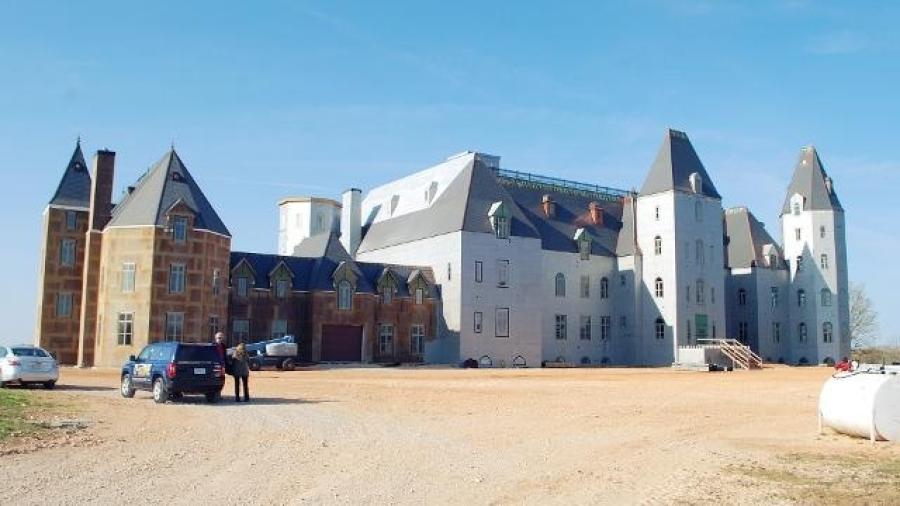 HIGHLANDVILLE, Mo. (AP) - About where Branson billboards really begin to clutter U.S. 65 south of Springfield, a little road takes off east, winding through woods and pasture, passing cattle and crossing a creek.

A gravel drive then climbs to the new Huff place.

Seen for miles in all directions, this mountain crescendo, one of the largest houses in America, reaches into the Ozark sky like a mix of French chateau, university building and something out of an Errol Flynn movie, The Kansas City Star (http://bit.ly/1YGWHt1).

A herd of exotic hogs roaming the surrounding woods and rumors about secret tunnels just thicken the plot.

There's still a lot of finish work to do. For now, owner Steven T. Huff, 64, a Missouri boy who made good first for the CIA and then for himself, is living in the part of the house that is done, but that's 20,000 square feet, so he's not exactly tripping over boxes.

Whatever you call it, the whole thing, swing set, shrubs and all, might fit in Pensmore's grand ballroom, which measures 2,000 square feet with a 32-foot, 4-inch ceiling.

Oh, sorry, that's 32 feet, four and a half inches, according to Huff.

He's an astrophysicist. A serious man of decimal details and a neatly tucked plaid shirt. He didn't build this place to throw Gatsby-like bashes. He says his house is very much a laboratory for environmental sustainability.

Pensmore, he swears, will be standing 2,000 years from now.

It's made of concrete.

``If Romans used it back then and some of those buildings are still here, why can't we use it now?' he asked. ``Fire won't burn it and termites won't eat it.

``Yes, I think this house will be standing 2,000 years from now. Even then it would be hard to knock down.'

Huff says the house will withstand an earthquake, bomb blast and a direct hit from an F-5 tornado. Turrets reaching high from that Christian County mountaintop practically spit in the eye of a twister.

This is how homes, hospitals, schools and retirement facilities should be built, he says.

On a recent visit, when any of the 20 or so workers approached with a question about concrete molds, solar power or the heating and cooling system, Huff knew when, why, what it's for, how many it takes and where it goes.

When not on site, he monitors construction by satellite feed.

But for all his technical acumen, he didn't know what a drawing room was. And his house has one _ his daughter Susan's input. It's across from the two-story library, down the hall from the kitchen with a pantry big enough to park a truck.

Apparently, Huff said, a drawing room is where women would withdraw when men went for brandy and cigars.

``Seems like it ought to be called a withdrawing room,' he said, allowing a hint of a smile.

That's the mind of Steven Huff. Anything pretty about this house _ that's his wife's and daughter's doing. He got degrees in physics and astrophysics, served in Army intelligence, joined the CIA, developed software to analyze satellite imagery, sold a company for a gazillion dollars, retired and became an inventor.

He started with a barn in Virginia where he lives.

Then in 2009, he began work on Pensmore, which will serve as a family retreat and home for the Huff Family Foundation. He declined to divulge the cost of the home. He envisions scholars and ``deep thinkers' using the library and many of the reading rooms.

The mere appearance and immensity spurred rumors in the area about fortress-like defenses, a secret network of tunnels and Huff's clandestine past. One tale had Pensmore being used as the new seat of government after a takeover by the Illuminati.

Across the valley, neighbor Jeff Campbell sat on his back porch one night smoking a cigarette and looking at Pensmore when his dogs began to bark and he heard what sounded like a train.

``There's no tracks around here and the noise was headed to the ridge over there at that house,' Campbell said. ``I never did know what that was and never heard it again, but I sure heard it that night.'

Another man, Dean Meadows, who lives nearby on old family land, said: ``Spend that much money, people are going to talk. Just stories.

``But people around here sure were curious seeing that thing go up.'

Huff grew up in the small Missouri town of Brunswick and first came to the Ozarks when he was 10.

His parents had taken the family to Silver Dollar City. He attended Hampden-Sydney College in Virginia and then California Institute of Technology, where he received a master's in physics.

After leaving the CIA, he started a company in 1993 that developed software to analyze satellite imagery. After selling the company, the plan was to slow down, but that didn't work out.

``My dad is too curious about things,' Susan Huff said.

He bought TF Concrete Forming Systems, which uses an aggregate mixed with tiny, thin, twisted strands of high-tensile wire called Helix. Huff says the Helix makes concrete less vulnerable to high winds and explosive blasts. Walls would bend rather than break and then flex back into place.

After retiring, again, he bought 600 acres between Springfield and Branson and began planning Pensmore. He searched for ideas among the great mansions of France and England.

The exterior walls, 12 inches thick, use a foam substance for further insulation. Pipes within the walls carry hot water throughout the house in cold weather and cold water to cool the house in summer.

On top the house is 4,000 square feet of solar panels.

Huff has invited physics and engineering students from from Hampden-Sydney to study how the house works and how to improve its efficiency. Students from Drury University and College of the Ozarks also have visited.

Huff is convinced the numbers show that concrete is how buildings should be constructed.

Coming out of the trees on the drive up the mountain, past the Salers cattle and St. Croix sheep, Pensmore appears like Oz against an Ozark morning sky.

Ralf Augstroze, a media rep, greeted visitors on a recent day. He's known Huff for years, back, he said, to their time together at the CIA.

Different for sure. Inside the unfinished main house, signs direct workers and delivery people to various floors and wings. Handy. The house has five floors, several elevators, 13 bedrooms _including five suites with kitchens _ and 14 baths.

All the concrete molds are being made in the basement, which during construction is essentially a factory. The house currently looks like concrete gray, but when ``cladding' is complete, it will resemble native stone like an old English mansion.

The house has a music room, telescope observatory, several reading rooms, hobby room and a museum.

On a recent tour, Huff, whom Augstroze described as ``an early riser and a night owl,' spent far more time talking about energy efficiency than opulence.

That's how the tour came to an end, on the open roof surrounded by solar panels and just above nine tons of batteries.

Huff broke away from the energy talk to point out the Ossabaw Island hogs in the woods below. He told about how Spanish explorers brought the breed to the New World and left the hogs on an island off the Georgia coast.

``Very healthy meat,' he said, a slight, cool breeze blowing across the roof a hundred or so feet above the ground, with magnificent views all around, and from all around, views back at the house on the mountain.

Some day this place will be done and it will be normal, part of the landscape.

But not now. It's too new, too big and the stories too many, real or not.

``I'd like to see the inside,' said Carolyn Meadows, a neighbor who watched it go up. ``It'll probably never happen, but I'd like to get inside that place and just look around