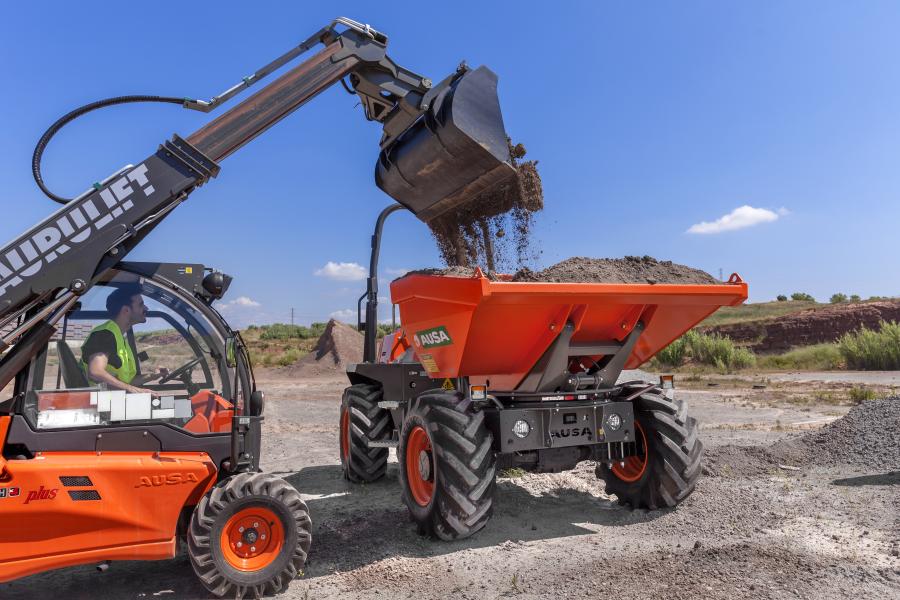 In 1956, four friends in Spain came together to form a company to design and build microcars for the European market. Their business, Automóviles Utilitarios Sociedad Anónima (AUSA), only produced the diminutive automobiles for five years, but the cars were noted for their comfort and the quality of their workmanship.

Then, AUSA abruptly shifted its focus in 1961 to make small dumpers for the construction sector. Although more commonly used in Europe, dumpers are different from dump trucks in that they are designed to be open four-wheeled vehicles with the load skip in front of the driver. In contrast, most dump trucks are larger and have their cab mounted in front of the load. A dumper gets its name from the fact its skip can tip to dump the load.

Sixty years later, AUSA has become a global manufacturer of compact industrial vehicles for moving materials and road maintenance. From its headquarters outside Barcelona, Spain, the equipment maker now produces a line of 16 different dumpers as well as forklift and telehandler models.

But it has only been since 2015 that AUSA has had a market presence in the United States, after the Spanish company decided to take a crack at America's lucrative construction equipment business.

"AUSA hired me in 2014 because of my expertise in the U.S. market and knowledge of how to create distribution networks in this country," said Ignasi Moner, CEO of AUSA US Corp., from the company's American offices just outside Charleston, S.C. "AUSA asked if I was ready to create a U.S. corporation and do state-by-state growth. I did so and we opened our American subsidiary in December 2014."

He noted that AUSA chose Charleston because of its desire to be on the mid-Atlantic coast where the time difference between South Carolina and the AUSA factory in Barcelona is a relatively short six hours. Its U.S. warehouse in Houston, Texas, is only one additional time zone behind the Mediterranean port city.

With much of AUSA's equipment and parts being transported via ocean vessels, establishing facilities in key shipping port cities like Houston, Charleston and Baltimore was a logical step.

Of the three machine types that AUSA makes and sells, Moner characterized its compact dumpers as the company's most popular line, although that was certainly not the case when he arrived in the United States.

"It started with our forklifts because we saw a real need for the rough terrain models, but now I would certainly say it is the AUSA dumpers," he said. "On my visits to construction sites around the world, it is common to see dumpers at work. When AUSA came here, we were among the top three dumper manufacturers in the world, but not only did I not see our dumpers in America, I could hardly see dumpers at all."

Moner noted, though, that after beginning its American operations, the product promotion that AUSA did at large industry events, like the annual Golf Industry Show and the World of Concrete convention, began to pay off for the manufacturer.

"We also worked with golf course builders and general construction contractors, and since then, more contractors have come to see the benefit of using dumpers," he said.

The list of AUSA's most popular dumpers, according to Moner, begins with the D601A, of which there are three different models, each featuring slight variations from the others, and all with payload capacities of 13,200 lbs., or 4.1 cu. yds. Behind that model is AUSA's D350AHG, which can haul up to 7,700 lbs., or 2.75 cu. yds.

"Contractors also like our more compact models — the D100A, D120A and D150A dumpers — because we realized a need from customers using small concrete buggies who wanted seats behind the skip," Moner said. "We can also offer them with seatbelts, giving customers more safety, and extra capacity ranging from 2,200 to 3,300 pounds. Each of these are articulated dumpers."

Moner insisted there is no real comparison to be made between AUSA's compact dumpers and larger dump trucks as the scale of the projects they take on are so different, he said.

Still, he noted, "Ours is a smaller, more maneuverable machine that is centrally articulated with a 180-degree swiveling skip. They are built to go up and down hills and over rough terrain with ease.

"The contractors that use AUSA dumpers save more money because ours are more efficient," he said. "For instance, you will often see skid-steers and front-end loaders at a site moving earth to where crew members spread the dirt. With AUSA's line of dumpers, excavators dig the dirt, put it into our dumpers, which can then better spread the dirt because of the 180-degree swiveling skip.

"What you usually see on those jobs are flat dumpers, which cannot swivel and don't work well on rough terrain. Why? Because there has not been a tradition to use compact dumpers," he said. "I see that in other construction work in the U.S. Once builders see the benefits of products where they save money, gain more efficiency, help the environment and make workers safer, they will usually use those machines.

Moner is proud of AUSA's ability to build its dumpers to have such power, safety, efficiency and cost-effectiveness. Available for only a relatively brief amount of time in the United States, the product stands out because of its unique attributes, he said.

"Now, I think dumpers are the most demanded products in this country," he said.

AUSA's line of rough-terrain 4x4 forklifts, like the dumpers, are compact, powerful and versatile, according to Moner. Their reduced size and small turning radii give them excellent maneuverability on even the steepest hillsides. The company's six forklift models also can handle heavy load capacities, ranging from 3,000 to 11,000 lbs., and have proven ideal in moving a large volume of hefty payloads.

The manufacturer's three compact 4x4 telehandler models utilize a telescopic boom that provides better handling despite the machine's smaller dimensions in terms of width. It is positioned on the right side of the machine to provide the operator with improved visibility and increased safety while loading and unloading materials.

When asked in July how many distributors AUSA had in the United States, Moner prefaced his answer by saying that the number was still trending upward.

"Currently, we have 20 dealers and 48 points of sale, since some dealers have multiple branches," he said. "By the end of 2021, we plan to raise that total to 25 dealers and 50 locations that sell AUSA products. There are still states where we want to offer our machines."

With its product availability spanning five continents, and with subsidiaries in Germany, France, the United Kingdom and China, Moner said expansion in the American market has now become a priority.

To boost the number of distributors across the country, he said the manufacturer has designed an attractive dealer program to assist with marketing, service and parts for AUSA machines.

"We want them to become more of a partner and not simply a place to stock and sell AUSA equipment," Moner said. "I don't think we are very demanding — we just want them to succeed. Although many dealers know now who we are, for other dealers we are a new name, and we have a new line of products, like our dumpers. We want to help them locate customers for those machines.

"And we also know that people that own AUSA products love their equipment," he added. "We offer a very solid collection of products."  CEG