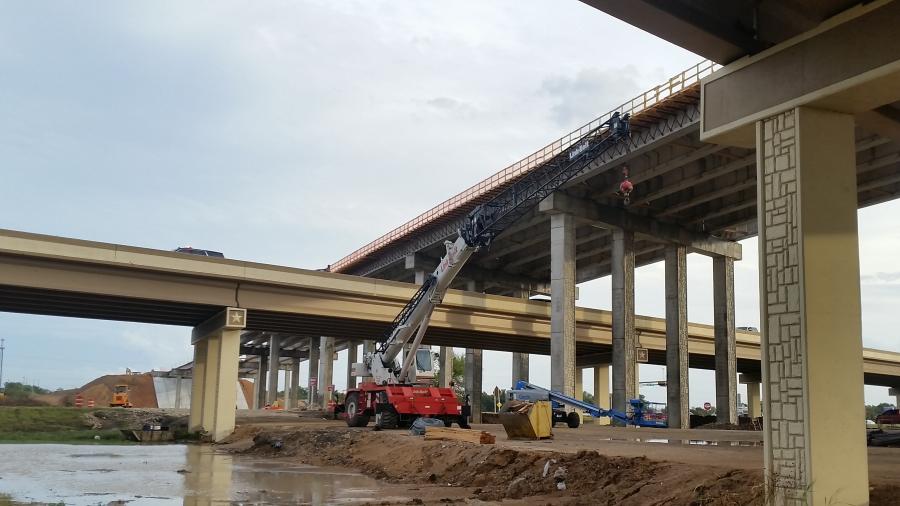 Crews from McCarthy Building Companies Inc. began work on a $149 million Texas Department of Transportation's (TxDOT) SH 71 Express project in January 2015. The toll lanes are scheduled to open to travelers in the Austin area in October 2016.

This is a key road for area traffic and in addition to day shifts, work is being done at night and weekends to minimize the impact on traffic.

“The project is dedicated to improving long-term mobility in Austin,” said Emily Riggs, public information coordinator for the SH 71 Express project. “State Highway 71 is one of Austin's most important roadways connecting drivers to the Austin-Bergstrom International Airport (ABIA), the city of Bastrop, and other central Texas communities. The purpose of the project is to enhance safety and reduce congestion and travel time along this corridor.

“Mobility improvements to SH 71 have been studied by TxDOT, in cooperation with the Central Texas Regional Mobility Authority,” she added. “In compliance with the National Environmental Policy Act, TxDOT conducted an environmental study for the project. The final environmental assessment was completed in May 2014 and the project received a finding of no significant impact.”

The bulk of the work is a 3.9-mi. (6.28 km) limited-access toll road — one lane in each direction — beginning at Presidential Boulevard, near the airport and extending east, ending at SH 130 near Onion Creek. The project will include two new toll lanes, new bridges over FM 973 and SH 130, and ramps between toll lanes and the main lanes of SH 71 and SH 130. In addition, Presidential Boulevard and FM 973 will be widened.

The Central Texas Regional Mobility Authority, an independent government agency created in 2002 to improve the transportation system in Williamson and Travis counties, is responsible for the toll road.

The expanded highway, a project funded by the federal and state government, is needed as traffic in the project area has increased by 158 percent since 1990. The project is expected to reduce travel time by 16 percent in 2016 and 54 percent by 2026. When completed, the road will be able to accommodate 105,000 vehicles per-day (west of FM 973).

The express project is one of several improvements intended to complete a highway upgrade to SH 71.

A workable traffic plan was needed to minimize the impact on traffic and to protect the construction crews. To this end, TxDOT's Public Information Team keeps the public informed via a Web site, a hotline, various announcements, E-Newsletters and press releases.

The team developed an extensive traffic control plan to minimize impacts to motorists and pedestrians. This includes working night shifts to set traffic controls and barriers for the following work day and to drill the deep foundations for the bridges, and employing smaller pieces of equipment, such as low overhead clearance soil nail drilling equipment, to work in tight spaces and minimize the need for lane closures.

McCarthy has been working closely with its design partner Lockwood, Andrews & Newnam Inc. (LAN) to develop the most cost-effective design solution for the project and has completed numerous similar reconstruction projects under heavy traffic conditions in Texas.

There were two major design challenges that had to be overcome according to LAN. Building the toll lanes in a busy corridor required navigating several issues and foremost among them was minimizing utility relocations and service interruptions. To discover potential conflicts, the project team generated a 3-D geometric model, developed by DTM-Solutions using Microstation software, and visualized the design.

Native soil condition was another. Expansive clay soils, prevalent in the east Austin area also created challenges. The soils in the project zone have plasticity indices (PI) ranging from 29 to more than 50, well above the design team's target for the subsurface conditions under the toll lanes. High plasticity soils have substantial shrink-swell potential with changes in moisture content and samples were taken 8 ft. (2.44 m) below the travel lane and required a PI of a weighted average of 25 or lower. When PI was too high, McCarthy over-excavated and replaced with a select fill of low PI materials.

“Every day there is some kind of challenge,” said Jeff Billow, McCarthy's project director. “The first year has been about relocating utilities. There are 13 different franchised utilities that had existing infrastructure, and part of our design is accommodating them. The last of utilities is out of the way and that is pretty significant milestone for us because on a lot of these jobs, utility delays are a cause of time extensions.”

McCarthy crews relocated many of the utilities, with their cooperation and approval, with Texas Gas being the exception, which hired its own preferred contractor.

Billows, via solid pre-planning and planning, had been able to anticipate nearly all of the challenges and develop solutions for them.

“We've been reasonably successful in managing the big risk items and we haven't had too much come up that we haven't had to maneuver around,” he said. “Our coordination up-front is paying dividends. We meet with our counterparts at TxDOT daily. It's essential to have good lines of communications at all levels on a project like this and the same applies to all of the stakeholders and utilities.”

The year-round work has an average of 150 workers on site daily. Weekly meetings are held with the subcontractors to coordinate work, which is bolstered by daily interaction.

Working at night is not easy, but Billows is doing his best to minimize the impact on the crews.

“Working at night is certainly riskier and less productive,” he said. “Lighting is an issue on a heavily traveled corridor like this. With good traffic control and trailer-mounted light plants on 15 to 20 foot tall masts, the conditions are good. We also use crash attenuators and barricades. Sometimes we have road closures to bring in concrete and police officers help us to initiate the closures. Placing beacons on our trucks helps to increase the awareness of the operation to the public.”

Safety, be it at night or day, is a priority and individual crews have daily safety briefings prior to the start of the shift. A monthly job-wide safety meeting is held and occasional weekly meetings are scheduled depending upon the work.

“Our design is a standard TxDOT design — basically columns of three or four feet in diameter and three to four wide and standard girders and decking,” said Billows. “It's replicable and pretty easy to produce. All the girder manufacturers are using TxDOT standards, and the speed and efficiency of the design are the reasons that led this to be the design of choice.”

In addition to netting to prevent debris from falling onto the highway, much of the bridgework is done at night, which allows for road closures beneath areas where the work is ongoing. This makes the cutting of deck panels and placement of overhangs much easier.

Billows and his crews take nothing for granted when building bridges and are employing practices learned on previous bridge projects. It is the same for roadwork, which has some of the toll lanes and general purpose lanes based on standard asphalt pavement designs and concrete paving for the roads between the bridges and elevated structures.

“The roadwork is a pretty involved process,” said Billows. “The paving goes fast, but for the work on the base, we do it right as quickly as we can and efficiently.”

Because space is tight, materials are delivered on a just-in-time basis.

“With girders,” said Billows, “we typically take them right off the truck and put them in place. It's the same with the deck panels. For the less sizable materials like concrete sewer and drainage pipes, fittings and joints, we have a little yard where we stockpile them. As far as embankment material, we have a few sources within a five-mile radius of the project and they deliver as we need it. There is a good community of suppliers in the Austin area.”

“We recycle whatever we can,” said Billows. “Meeting the specifications of TxDOT is a challenge as it has rigorous controls on the materials and sometimes recycled materials don't meet them. We're planning to use recycled concrete roadway base. Brick, blocks and concrete are sent to various places to be crushed. Suppliers in the area process and stockpile it and test it, and then we use on the job as roadway fill.”

In terms of equipment on site, McCarthy has a backhoe; an excavator and mini-excavator; a blade motorgrader; a cement stabilization mixer; compactors (padfoot, smooth drum, and pneumatic); cranes (mobile rubber tire and mobile crawler); dozers (D3 and D6); a loader; a forklift; a street sweeper; trucks (water, fuel and crash attenuator); and a welding machine.

The firm's closest shop is in Houston, a fair distance from the project.

“We have an onsite mechanic with a truck that serves as a roving shop and he can do minor repairs,” said Billows. “We work with Niece Equipment LP for some of the equipment. Down time is a big deal for us, so we take a proactive approach and do a lot of preventative maintenance — oil and filter changes. We try to minimize the effect of repairs on our progress.”

A machine or vehicle after 500 hours of use undergoes more serious preventative maintenance. Equipment dealerships also are part of the maintenance plan, especially for equipment that is under warranty.

A lot of McCarthy's newer equipment, especially the Cat pieces, have the electronic monitoring systems and they also are equipped with GPS systems.

“Machine control helps us do the work right and efficiently” said Billows, “and that reduces the number of hours that the equipment is used and thus keeps your equipment costs down.”

Billows, with 15 years of construction industry experience, appreciates the evolution of equipment and on this job, has benefitted from the sharing of crews and equipment from other McCarthy projects in Houston and Dallas.

“It's critical. People as much as equipment, probably more so,” he said. “We want to keep our people busy so that they can stay with us. We spend a fair amount of time every week talking about transfers of people and equipment between the projects.”