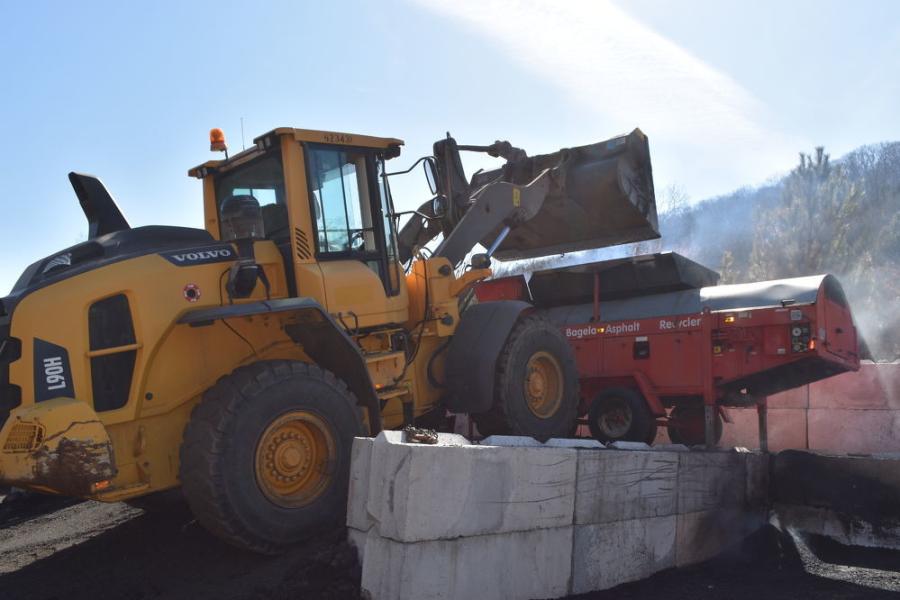 A rubber-tired loader feeds the hopper atop the Bagela recycler.

Josh Williams and Megan Hill had each grown up around the heavy equipment trades. In 2012, the husband and wife team started M.J.W. Services in Thomaston, Conn.

Originally focusing on utility contracting, within a few years some other doors opened for Williams and Hill. As the business grew, they started to look for a piece of land that they could use for a yard, not only to accommodate their growing fleet of trucks and equipment, but also to stockpile some materials. 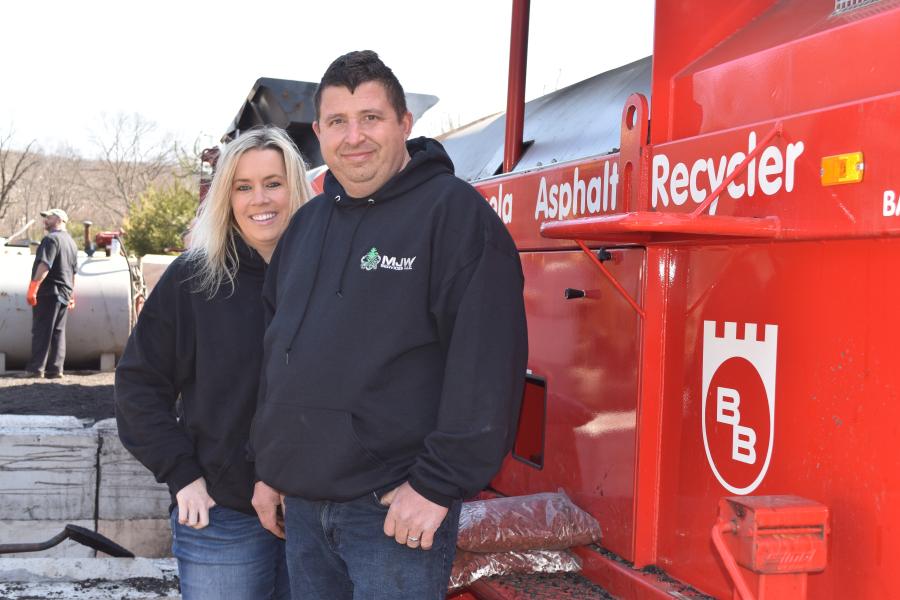 Their search led them to a 37-1/2-acre parcel located on Waterbury Road just south of Thomaston, Conn., and conveniently located just off the exit for Route 8, a major thoroughfare through the area.

After a considerable amount of effort and back and forth with the town board, the pair managed to get their new property permitted as a recycling facility accepting clean concrete, asphalt millings and clean fill.

"Once we had the permits in place it really just took getting the word out, mostly by word of mouth, to the area contractors and it was not long at all before we had a steady stream of trucks bringing us concrete, dirt and asphalt, and usually leaving with a load of mixed processed material that they could use on their construction projects," Williams said.

Once the operation was up and running smoothly, an expansion of their existing operation was brought to the table. Williams's good friend, Chris Spinella of Bagela USA/Pavement Recyclers, suggested Williams and Hill expand their recycling operation into an additional direction. Spinella was familiar with an asphalt recycling machine manufactured by Bagela that could turn the asphalt millings that were essentially being ground up and reused as fill into a far more profitable product by reheating and recycling this waste product into a usable asphalt hot mix. 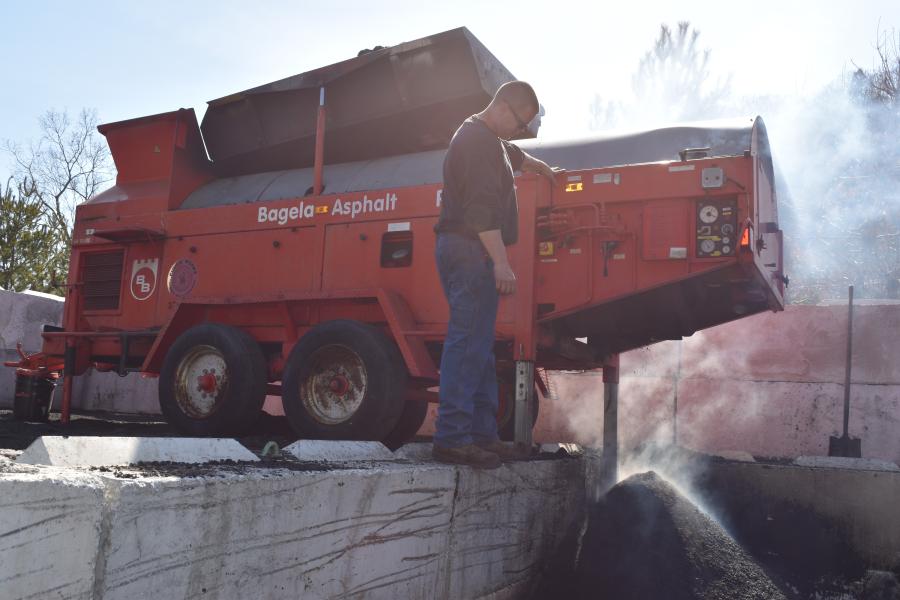 Utility companies and some other categories of contractors are forced to cut open sections of asphalt year-round, and a part of their contract specifies that upon completion of the work, the asphalt has to be replaced, which becomes particularly challenging in the winter when asphalt plants are closed. The only solution available to contractors facing this dilemma has been the use of cold patch, an expensive, yet temporary asphalt patching product that can be used in cold weather. As soon as the asphalt plants are open, however, cold patch has to be torn up and replaced with hot mix asphalt.

Bagela's BA10000 asphalt recycler can accept asphalt millings and waste products, heat them, break them down and turn them into a quality hot asphalt at a consistent rate of 8-10 tons per hour during the winter season when hot asphalt is not available anywhere else, according to the manufacturer.

Spinella believed Williams and Hill were in the ideal situation to expand their recycling operation into recycling this hot mix asphalt for local contractors and that it would be a profitable venture for them. The raw materials were readily available to them and the hot mix that they would recycle would actually cost less than the cold patch alternative, which can cost up to $165 per ton, that contractors were forced to use.

Another advantage to using hot mix versus cold patch is that the hot mix is significantly easier to work with than the cold patch. A material heated to 300 F to 330 F degrees is much more pliable than trying to lay cold patch, which is, at times, difficult to mold into place.

Once Williams and Hill decided to move ahead with the project, they needed to research the best equipment to meet their recycling needs. They determined Bagela was well suited for the type of volume that they wanted to generate, as it uses indirect flame and convection heat as its heat source, which allows for large volume, consistent yields.

Their plans included recycling asphalt during the cold season, after hours and weekends in as large a volume as possible. Knowing that the demand would be quite high, the decision was made to utilize two units, each capable of producing 10 tons per hour. 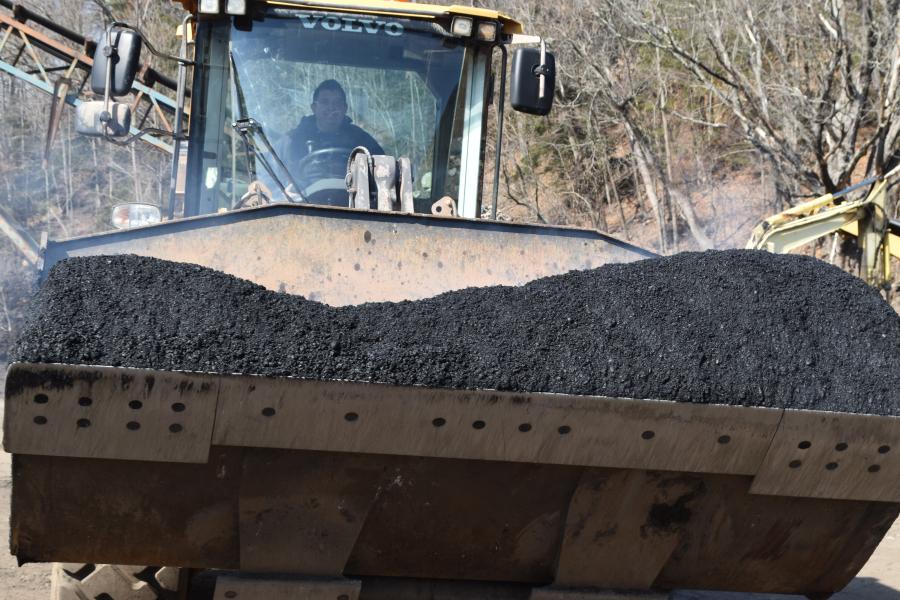 With the help of Greg Harla, a specialist with Bagela who has overseen the installation of more than 100 of these types of operations, concrete blocks were used to create an elevated platform for two Bagela BA10000 recyclers that would be fed asphalt millings via a rubber-tired loader with the resulting hot mix asphalt dropping to a discharge pit below, where it can then be loaded to the customer's trucks for transportation.

The operation went online in January 2021 and has been an immediate success. Word spread very quickly of the asphalt availability and demand has been growing steadily.

According to Williams and Hill, the Bagela recyclers have operated flawlessly and have met all of their anticipated production levels.

"Greg Harla and the rest of the people at Bagela are absolutely experts in their field and have made this project run seamlessly from start to finish. Our customers have been very happy with the quality of the product that's been produced. Even when extremely cold weather [below zero] has set in the quality of the product being recycled by the Bagela is extremely good," they said. CEG