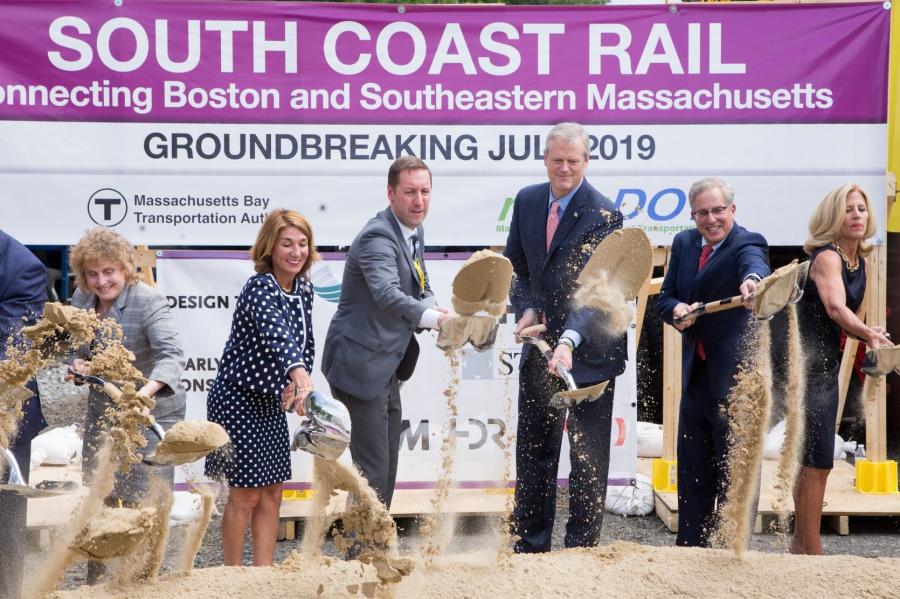 Officials celebrate the beginning of Phase 1 South Coast Rail along the New Bedford Main Line in East Freetown, an area in which culvert work is taking place.

"South Coast Rail Phase 1 will connect Taunton, Fall River, New Bedford and the surrounding areas to Boston, giving people more options to get to and from southeastern Massachusetts," said Baker. "We are proud to advance South Coast Rail further than it's ever been as part of our administration's $8 billion MBTA infrastructure investment plan over the next five years."

"Having Phase 1 of South Coast Rail fully funded in the FY20-24 Capital Investment Plan is a significant milestone," said Polito. "Thank you to everyone who played a role in keeping this project going forward and we look forward to Phase 1's start of service in 2023."

"After years of advocacy, the day when this expansion project will provide service to Southeastern Massachusetts communities is finally in sight," said Pollack. "This is a proud moment for MassDOT and the MBTA, and a proud moment for the Commonwealth. I look forward to watching the infrastructure in this corridor take shape and am eager for the day in 2023 when the very first train operates on this route carrying passengers."

"Like the Green Line Extension, South Coast Rail is a priority that would not be possible without the strong support of the Baker-Polito Administration and the MassDOT and MBTA Boards," said Poftak. "The MBTA is excited to build on the foundation that MassDOT built, and to begin passenger rail service to the South Coast in 2023."

"Since the first SouthCoast Rail groundbreaking ceremony I attended twenty-one years ago, the necessity of this project has only become more clear," said Sen. Michael J. Rodrigues. "The communities of the SouthCoast deserve to be economically competitive with the rest of the region, and SouthCoast Rail is a large piece of that. I applaud the Baker-Polito Administration for finally making this long-promised project a reality."

South Coast Rail early action projects currently under way have included infrastructure work on track, culverts, and bridges as well as the acquisition of land for stations:

In April 2019, MassDOT and the MBTA announced that the South Coast Rail Program recently reached two critical Phase 1 milestones. First, a finance plan was completed and fully funded in the Commonwealth's Capital Investment Plan. Second, the U.S. Army Corps of Engineers (USACE) approved the final federal permit required for the program to advance.

With a recently agreed upon total program cost of $1.047 billion, Phase 1 of the South Coast Rail Program will be funded 100 percent by the Commonwealth through a combination of general obligation bonds and special obligation bonds to be issued under existing authorization for the Rail Enhancement Program. The MBTA is not required to issue any revenue bonds that might otherwise impact the MBTA's future operating budgets. All bond cap provided to the South Coast Rail Program will be in addition to the bond cap that MassDOT currently receives to fund its capital plan. There will be no reduction in bond cap allocated to MassDOT as part of the South Coast Rail Finance Plan.

Other permitting milestones that have been achieved this year include the final USACE approval and the issuance of the Chapter 91 License, MassDEP 401 Permit, and the Mass Coastal Zone Management Consistency Review.