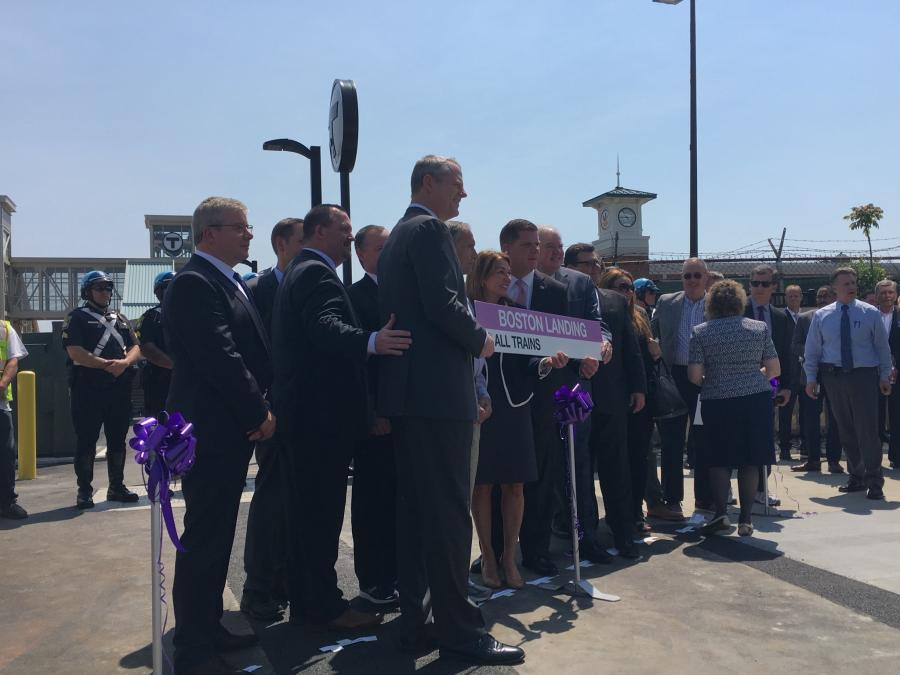 The Baker-Polito Administration, state transit and local elected officials and New Balance executives celebrated the ribbon-cutting of the new $20-million Boston Landing Commuter Rail Station, privately financed by New Balance, and restoring commuter rail service to the Allston-Brighton community for the first time since the 1960s, effective for riders on Monday, May 22.

“The opening of Boston Landing Station highlights a successful collaboration between the state, city, and New Balance to expand development and transit opportunities for the Allston-Brighton community,” said Baker. “Rewarding projects such as this one spur local economic development and community growth as we continue to prioritize investments that make our public transit system more reliable for riders.”

The station, located adjacent to the Massachusetts Turnpike on Guest Street, will be the seventeenth on the MBTA Framingham/Worcester Commuter Rail Line, which has undergone additional infrastructure improvements, including restored double-tracking and the replacement of more than 50,000 rail ties, to increase performance reliability and reduce heat-related speed restrictions. The MBTA's private commuter rail operator and partner, Keolis Commuter Services, helps to identify infrastructure upgrades and implements many of these enhancements throughout the network in close coordination with the MBTA.

“Strong public and private partnerships are working together to improve reliability and transit options for the communities served by this line and the whole system,” said Polito. “The addition of Boston Landing Station, along with infrastructure and schedule improvements, will help deliver greater performance for residents and employees of this neighborhood, and all along the Framingham/Worcester Line.”

Construction of the $20-million station began in October 2015, and was financed by New Balance, who will continue to pay for all maintenance costs of the station for the first ten years of its service. A successful example of public-private partnerships and transit-oriented development, Boston Landing Station comes as part of the 15-acre, 2.15 million sq. ft. Boston Landing Development site, which will at full build-out include new office, lab, retail, restaurant and open space; a 295-unit mixed-use residential complex; a 175-room hotel; and the practice facilities of the Boston Bruins and Boston Celtics. Significant improvements to local public roadway and infrastructure are also planned.

“Skanska is proud to have served NB Development and the MBTA to construct the new Boston Landing train station, and to deliver sustainable, efficient infrastructure that matches the aesthetic appeal of New Balance's world headquarters campus,” said Paul Pedini, vice president of operations at Skanska USA, who leads the firm's civil practice throughout New England. “Unique to construction companies in the Boston marketplace, we were able to combine our complex building management capabilities and MBTA-prequalified self-perform heavy civil expertise to safely complete this project, while facilitating the commuter and freight rail needs of the Framingham/Worcester Line.”

“MBTA and MassDOT, with the support of Governor Baker and Lieutenant Governor Polito, are committed to collaborating with external partners such as New Balance in order to provide the public with transit options,” said Pollack. “Boston Landing Station is an example of a private-public partnership that will generate jobs, encourage mass transit use, and serve as a catalyst for more economic activity in this neighborhood.”

“As Boston continues to grow and thrive, we need transportation that matches our City's needs,” said Walsh. “Boston Landing is a big step for transportation in our city, and a big day for Allston-Brighton. I'd like to thank the Commonwealth and New Balance for making this public-private partnership possible.”

The station features a high-level, canopied single platform centered between the eastbound and westbound tracks and includes accessible, redundant elevators and ramps. The station is designed to provide easy access for employees, visitors, and residents of the Boston Landing development and surrounding Allston-Brighton neighborhood.

“We're excited for the completion of Boston Landing Station and to open it to the Allston-Brighton community,” said Shortsleeve. “Through this public-private partnership and the use of pre-existing rail infrastructure, we're able to provide a new transit option that makes it easier than ever for people to travel to and from downtown Boston.”

“Boston Landing is the latest example of how public-private partnerships can enhance the Commuter Rail offering for our passengers and benefit the community,” said Scorey. “Together with the MBTA, we look forward to continuing to dedicate resources and time to further improve both reliability and convenience. This includes initiatives such as the creation of this new station and other improvements and upgrades across the network that will help make the Commuter Rail an even more attractive option for people in the greater Boston area.”