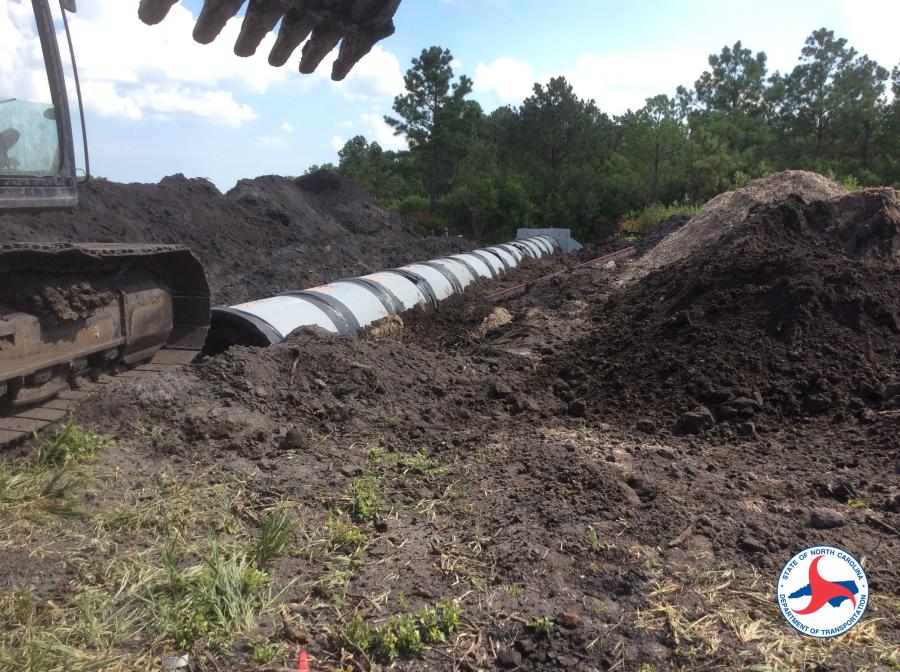 NCDOT launched a project in January 2018 to extend Military Cutoff Road to U.S. 17 and connect it to Interstate 140, providing drivers access to a faster-moving roadway to get around Wilmington’s Market Street.

The Wilmington, N.C., metro area, situated in both New Hanover and Pender counties, experienced significant growth over the past decade, experiencing a 15.5 percent rise in population from 2010 to 2018, ranking 49th in the nation.

"They're the fastest growing counties in the state," stated Alex Stewart, resident engineer of Division 3 of the North Carolina Department of Transportation.

Similarly, the Port of Wilmington is the fastest-growing port in the country, according to the American Council of Engineering Companies' report, with an increase of 26.2 percent from 2017 to 2018. As the population grows, traffic increases, contributing to congestion, delays and accidents.

Military Cutoff Road is one of the main corridors in Wilmington. Presently, it terminates on Market Street just north of the intersection of Gordon Road and Market. Current ADT figures for Market Street in Wilmington have reached 51,000, and NCDOT concluded that congestion relief was needed. 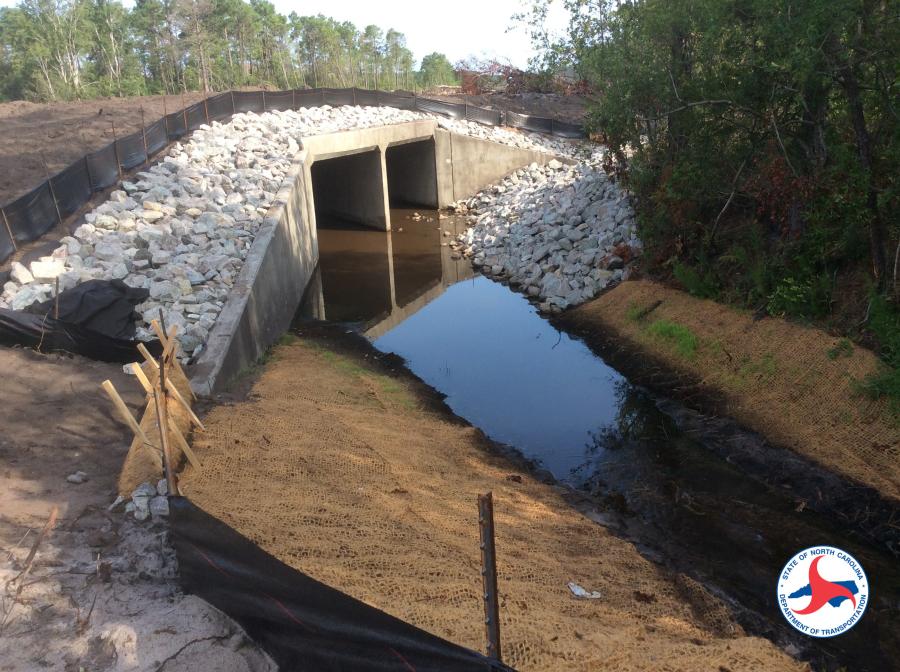 To do so, NCDOT launched a project in January 2018 to extend Military Cutoff Road to U.S. 17 and connect it to Interstate 140, providing drivers access to a faster-moving roadway to get around Market Street. I-140 is a 26.3-mi. freeway that serves as a bypass of Wilmington beginning at a trumpet interchange with U.S. 17 west of the downtown area before heading north to meet U.S. 74/U.S. 76.

"This project is an extension of Military Road from Market Street to I-140/U.S. 17 bypass, providing safer ingress/egress," Stewart explained.

The heavily traveled corridor is used by workers, tourists and commercial trucks. It connects residential and business districts and provides access to I-140 to Jacksonville and Wrightsville Beach. This project will add two lanes, converting it into a six-lane, median-divided corridor to alleviate congestion. Safety will be enhanced, Stewart pointed out, due to a concrete median and monoliths, as well as reduced conflict intersections. (see "RCIs" at the end of article.)

Still in its infancy, once right of way acquisition was complete, the project began with utility relocation along Market Street during the pre-construction phase. "There's so much in the ground," Stewart said. "We've had to move many lines." Overhead and underground utilities, including fiber optic, water, sewer, power and telecommunication lines, complicate the job and slow progress.

Ongoing work consists primarily of site prep and clearing, Stewart said. Because this is a new location corridor, site prep includes cleaning, removing and disposal of wooded vegetation and debris. Due to the soil conditions, crews are undercutting undesired vegetation. There also are some homes in need of removal.

The project will extend the road for an additional 4 miles, and calls for grading, paving and drainage improvements along with new sound walls, bridges and culverts. Crews will build 18 structures: four bridges, four box culverts — two single-barrel, two double-barrel — and 10 sound barrier walls. 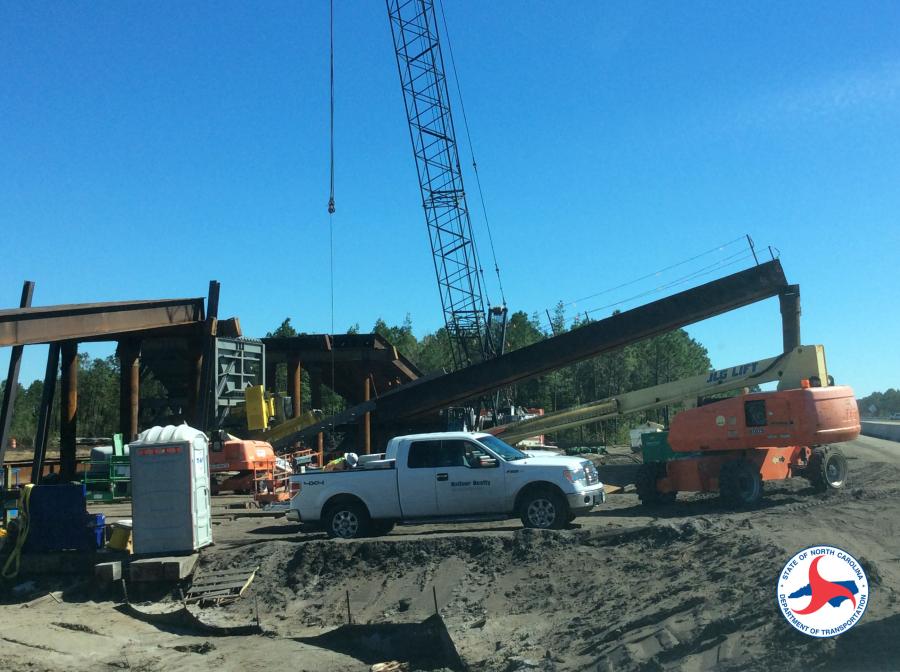 Other improvements to Market Street include an updated drainage system to remove water from the road, a concrete median to reduce crashes and improve traffic flow and new on/off ramps.

Additional work includes pedestrian improvements: a 10-ft. multi-use asphalt path and a concrete sidewalk for safe access to the beach and Ogden Park. Stewart noted that the contract does not include lighting, which he stated is the municipality's responsibility.

General Contractor Balfour Beatty Infrastructure, headquartered in Atlanta, Ga., is currently running day, night and weekend shifts. During site prep, 20 to 30 people were onsite — including DOT staff — but Stewart expects that number to increase as the project progresses.

Pointing out that they are on schedule for an expected completion in the fall of 2022, Stewart said he considers it "business as usual." However, he did offer that the contract completion date was modified from Spring 2022 due to weather delays early in the project.

Despite previous budget shortfalls, NCDOT was able to award the $95.5 million state-funded contract and launch the project, which will require 2.3 million cu. yds. of fill, 150,000 tons of stone and 85,000 tons of asphalt.

Stewart explained that NCDOT's need to haul in soil was to obtain the correct compaction, adding that concrete isn't used because of the climate. While they may be less severe than freeze-thaw cycles in northern states, these cycles nevertheless affect decision-making about materials. Additionally, Stewart said asphalt costs "far less" and provides better traction for snow and skidding, and thus a safety advantage.

Stewart lists some of the equipment currently used on the project by the prime and subcontractors:

One of NCDOT's biggest challenges on this project, with its urban setting and high-volume roads, was minimizing the impact to the traveling public. Communication is key. Alerting travelers to the changing detours, lane shifting and lane closures as they occur in phases is simplified by use of the Traveler Information Management System, which syncs with navigation systems such as Google Maps to provide the latest updates in real time. TIMS even sends out press releases and posts on Twitter.

"It helps us provide a safer work site," Stewart said.

Once this lengthy project is complete, another is on the horizon that ties into the work on Military Cutoff Road. North Carolina Highway 417 is a proposed state highway bypass around Ogden and Hampstead. It will have two sections that meet at NC 140: a limited-access extension of Military Cutoff Road and the controlled-access Hampstead Bypass. Work on the first section of the Hampstead Bypass north is scheduled to begin in 2020 and be completed in 2025.

Reduced conflict intersections, also known as superstreets, synchronized streets or median U-turns, change the configuration of an intersection, often through the incorporation of J-turns or U-turns. RCI is a general term describing a variety of designs used to improve traffic flow and safety, but they all decrease the opportunities for drivers and pedestrians to collide.

Intersections with a high volume of traffic and accidents are good candidates for an RCI. A four-way intersection in which drivers can go in any direction from all four approaches increases the likelihood of a crash. According to a 2010 N.C. State University report, an RCI can save 20 percent in travel time, even when compared with a traffic signal, at a four-way intersection.

Perhaps the most common type of RCI is the median U-turn. Drivers turn right on the main route when they find a safe opening in traffic. If they wish to go in the opposite direction or cross the highway, they pull into a dedicated lane to make a U-turn. There may or may not be a traffic signal.

Furthermore, according to the N.C. State University report, business owners surveyed saw no significant decrease in revenue on roads with medians. In fact, 58 percent of business owners reported that the number of customers remained the same or increased after the median installation. CEG