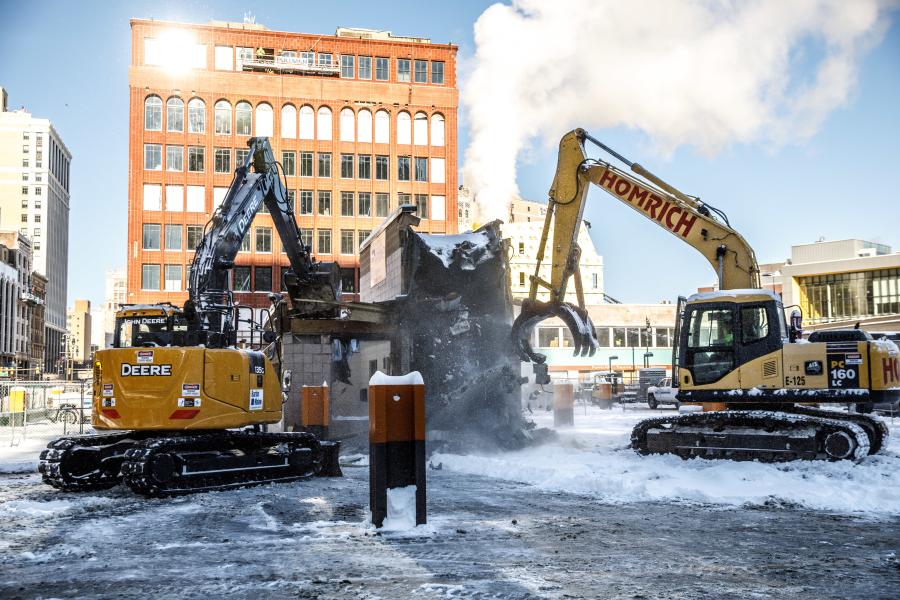 The construction project, managed by Barton Malow Company (BMC), is located on Woodward Avenue, Detroit's main thoroughfare. This tower complex when completed in late 2022, will be the tallest in the city, roughly 70 ft. taller than the Renaissance Center along the city's riverfront. 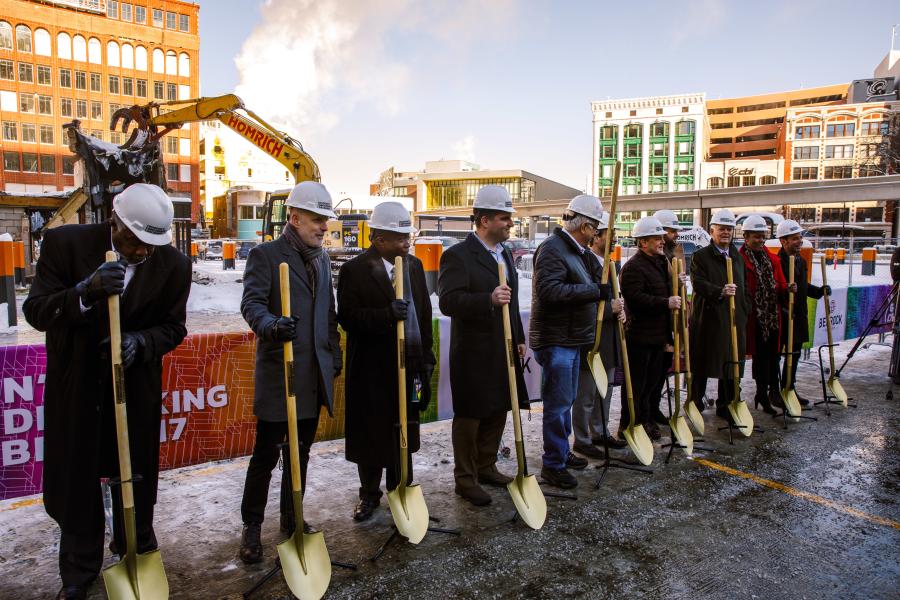 The groundbreaking followed years of planning and preparation, and the project is intended to be a transformational development that will serve as a hub for attractions, shopping, conferences, events, and exhibitions. It will provide views of the city and region from an observation deck that is 800 ft. high, and be home to a ground floor market and exhibition space.

“Today downtown Detroit is officially going vertical,” said Bedrock founder and chairman Dan Gilbert in a news release. “Not only do we need projects like this one to meet the significant demand for office, residential and retail in downtown, but this development becomes the 21st century version of what Hudson's was to metropolitan Detroit for so many decades in the 20th century. In addition to creating opportunities for all Detroiters, this project will put our city on the radar of world class technology companies like Amazon and others.”

The Hudson's site is widely regarded as one of the most well-known commercial locations in the city, so it was a priority for Bedrock to design an iconic structure that pays homage to the history of the site.

“When we hear people talk about what Hudson's meant to them, the common theme is that it was a place where memories were made,” said Bedrock President Dan Mullen. “Bedrock is fortunate to have the opportunity to create a new landmark by providing all kinds of common and public space which is much needed in our city, and will be the location where innovation and the ideas of the future germinate.”

The project consists of two buildings. To the south will be a 58-story tower building with residential capacity of between 330 and 450 units above 11 floors of amenity and exhibition space. The top floors of the tower will consist of a multi-level public observation deck providing spectacular vistas of the city. At the north is a 10-story “block” building that will house a ground floor market and have five floors of large, flexible space designed to accommodate a wide variety of events, conferences, technology attractions, etc., and four floors of office space at the top. Under both buildings will be two floors of semi-automated underground parking for 700 vehicles.

“The complex is a bit of a homage to Detroit, in terms of the exterior skin,” said Joe Guziewicz, Bedrock's vice president of construction. “It starts out with terracotta at street level and transitions to a more modern glass structure as it goes up the building. It's an interesting play off of what's around it and definitely a nod of the Detroit heritage, which is rich in architectural design with Albert Kahn buildings. Our project is a very modern take on that.”

The tower complex was designed by New York-based SHoP Architects, Detroit-based Hamilton Anderson is the Architect of Record on the project.

Bedrock was keen to ensure that the project creates dynamic public spaces to increase walkability downtown with an active streetscape on all sides of the development. In addition to filling a gap on Woodward, it also will dramatically increase the number of people who take advantage of the walkability to the north to Grand Circus Park, to the entertainment district and beyond, to Campus Martius and all the way to the river to the south. It also will activate the area directly to the east anchored by popular restaurants and entertainment.

Guziewicz noted that it will be a LEED building, and is registered for WELL for the office space section. A LEED consultant has been brought on board.The design of the complex was crucial to secure.

“It has to fit into the fabric of the existing architecture and we've met it and knocked it out of the park,” said Guziewicz. “The other challenge is to make it less about the structure and more the ground plan, the experience of pedestrians and how they interact with the building, and how the building interacts with the environment around it. We wanted something that will be open, airy — that is why you see things like the thru-cut — the separation between the tower and the podium that makes a physical connection where people can enjoy the alley experience that's very activated.

“It's nearly 60-feet wide and connects Woodward Avenue to Library Street and the Skillman Public Library,” he said.

Interest in the construction community is already high for the Hudson's project, with several companies bidding for early stage construction work.

“The first major outreach program has happened even though we are just in remediation and site capture,” said Guziewicz. “We had a huge turnout of over 400 people and some 200 companies where we introduced the project. We work with the local city and county officials to make connections with smaller local businesses and larger businesses to pair them. We also work with the Randolph School, a technical school in Detroit that prepares its students for jobs in the skilled trades.”

The Hudson's project is expected to create about 15,000 construction jobs, which include subcontractors, suppliers, truck drivers, etc. The actual construction site should have about 7,500 people passing through the site at various phases.

“We will be tapping all of Detroit, Wayne County, and surrounding counties for our work force,” said Guziewicz. “It's something that we've been doing for the past couple of years and actively now. We're working with the unions to make sure that their recruiting efforts and apprenticeship programs are successful, like the Randolph School, to help make sure that the pipeline is robust.”

BMC is definitely aware of the epic scale of the work.

“Building in a tight, downtown environment always has its challenges,” said Steve Lorenzo, Barton Malow project director. “Conveying and staging materials to and on the site through busy city streets are the most common. The two plus-acre site will be transformed right to the curb lines on all four of the surrounding roads, working in close proximity to both the People Mover, and the Q-Line. Safety is our first priority. We want to create a productive and safe environment for those in and around the construction site.”

Once the demolition of an existing parking deck is complete, the construction will begin on the tower's foundations and superstructure. As the tower comes out of the ground, the new parking structure will follow. The 10-story building will be the last to emerge and work will continue on both structures concurrently and year-round.

“Building construction in winter is common in Michigan,” said Lorenzo. “Some of the most complex and long-lead systems include structural steel, curtain wall [aluminum/glass enclosure] and vertical transportation [elevators/escalators]. Early design packages will be released to expedite procurement to match the flow of work.”

For the 2018 construction season, the goals are to complete demolition and begin the tower foundations. Most of 2019 will be spent building the structure. The interior work will begin as soon as there is clear floor area to start. Enclosure work is key to completing the final build-out and finishes.

As the construction progresses, the number of workers will increase. At peak, it is expected that there will be up to 600-plus workers on-site.

The process of bidding and contracting with trade contractors will be ongoing for at least two years. Thus far BMC has awarded contracts to Homrich for demolition, Hardman Construction Inc. for earth retention, Traffic Management Inc. for traffic control signage, and Motor City Electric Co. for temporary electric.