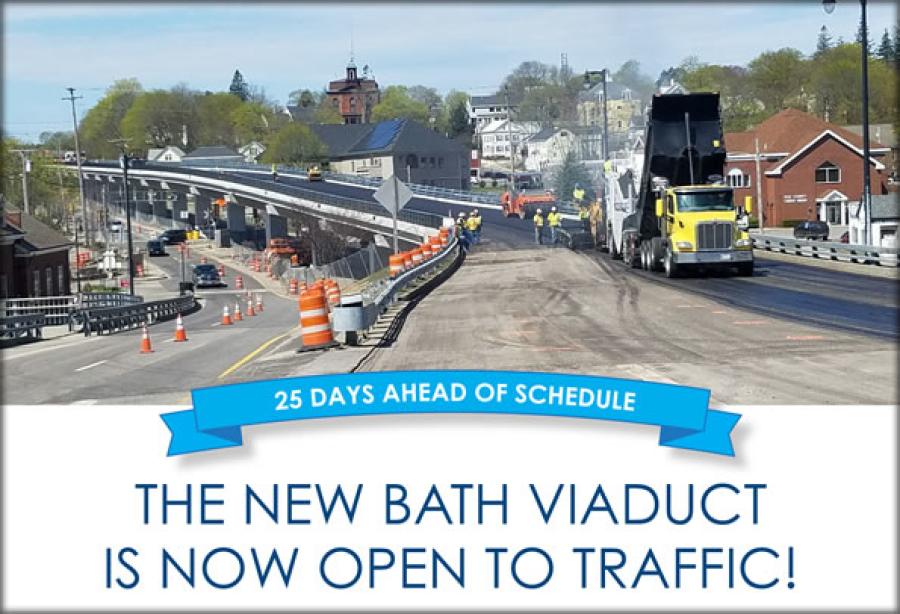 MaineDOT and its contractors have opened the new Bath Viaduct to traffic approximately 25 days ahead of schedule. Paving and striping were completed, and workers removed the barriers and changed signs to allow Route 1 traffic to flow over the new viaduct on the morning of May 3.

Glenn Philbrook, MaineDOT resident, expressed appreciation on behalf of MaineDOT for what he described as the outstanding work of lead contractor Reed & Reed of Woolwich. Philbrook also thanked Bath residents and the businesses of downtown Bath for their patience.

“While we were able to move quickly through the demolition, we know that was not easy for people who live nearby. There's just no way to do that kind of work quietly,” he said.

Philbrook said that work on the new viaduct started even as the final demolition was completed.

“The team moved forward quickly and because of excellent planning and coordination, we were able to shave almost a month off this phase of work.”

MaineDOT summarized the work that has been completed thus far as:

• rebuilt 240 linear ft. of rail line underneath the viaduct;

• upgraded and constructed more than 1,200 linear ft. of sidewalks;

While the new viaduct is now open to traffic, work will continue on surface streets and frontage roads underneath and adjacent to the viaduct. The final stage of work will continue through the end of July. MaineDOT advises that traffic impacts should be minimal, with some lane closures as the work progresses.