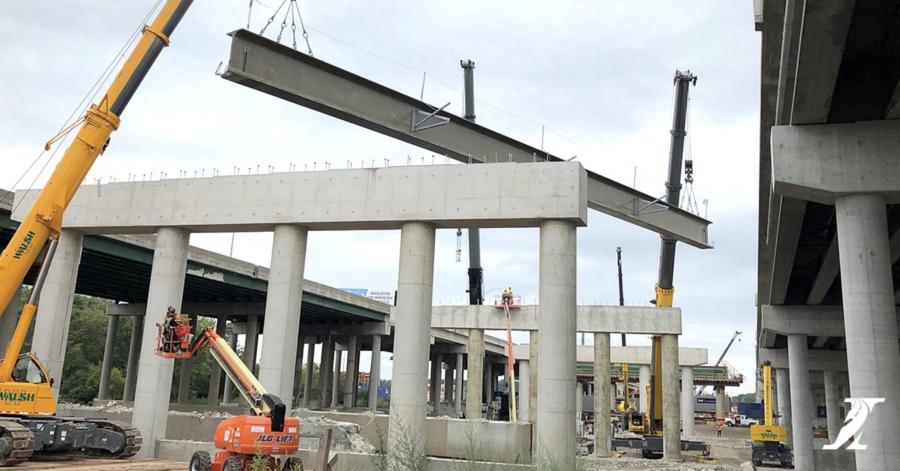 Cranes lift the first 115-ton concrete beam into place on the new southbound Mile Long Bridge while another 64 concrete beams — some measuring up to 187 ft. long — will be installed there this month as crews work to complete the structure on I-294. The new 4,800-ft.-long bridge is scheduled to open to drivers by the end of 2022. (Illinois Tollway photo)

Transport and delivery of bridge beams are under way for the Illinois Tollway's new southbound Mile Long Bridge on the Central Tri-State Tollway (I-294). Delivery of new concrete and steel beams for the $500 million Mile Long Bridge Project is anticipated to continue through early 2022.

As part of the $4 billion Central Tri-State Tollway Project, the Illinois Tollway is reconstructing the Mile Long Bridge that carries up to 150,000 vehicles daily over two major railroads; the Des Plaines River; the Chicago Sanitary and Ship Canal; the Illinois and Michigan Canal; local roads; and over several major distribution centers. Construction of the new northbound structure was completed in 2020 and construction of the new southbound structure is scheduled to be complete in 2022.

"This massive reconstruction of the Mile Long Bridge is right on schedule and as we continue to move forward we are working to ensure the roadway remains safe for both drivers and workers during construction, which is part of our overall commitment to safety," said José Alvarez, Illinois Tollway executive director. "We will make every effort to minimize the impact of construction on our customers, and we ask drivers to please be patient as trucks carrying the new beams for the southbound bridge make their way to the construction site."

The first deliveries of beams for the new southbound Mile Long Bridge began Aug. 9. The concrete beams are being transported by truck from a manufacturing site in Wisconsin, traveling eastbound on the Jane Addams Memorial Tollway (I-90) and southbound on I-294 to the construction site. Transport trucks, escorted by Illinois State Police, are traveling at a low rate of speed between hours of 4 a.m. and noon on weekdays. All deliveries are weather dependent and schedules will be available on Daily Construction Alerts posted on the Tollway's website.

The trucks with the beams will be parked along the southbound Mile Long Bridge during the day and beams will be installed on new bridge piers constructed over Des Plaines River and the Lawndale Avenue Solids Management Area owned by the Metropolitan Water Reclamation District during daytime hours. No additional lane closures will be required for this work.

During the month of August, 65 precast, prestressed concrete beams will be trucked more than 100 mi. to the bridge site with special 10-ft.-wide, heavy-load semi-trailers, featuring 14 axles, rear steering and custom engineered swivel bolsters. Each of the beams weighs approximately 115 tons and measures between 72 and 90 in. tall and between 111 and 187 ft. long.

Altogether 250 concrete beams will be delivered to the site for the new southbound Mile Long Bridge Project. In addition, 165 steel beam segments also will be delivered from a fabrication site in Kentucky during the course of the project and used to form 52 steel beams installed over the County Forest Preserve property and the Chicago Sanitary and Ship Canal. Each of the steel beam segments will measure between 86 and 120 in. tall and between 39 and 234 ft. long.

A $184.6 million contract to build the new northbound bridge structure began in summer 2019 and was completed in November 2020. Work began on a second $182.6 million contract in 2020 to remove the old northbound structure and deliver the new southbound Mile Long Bridge to drivers by the end of 2022. The entire Mile Long Bridge Project is scheduled to be complete by the end of 2023.

Both of the new bridges feature 27 spans supported by 26 piers, compared to the previous structures with 53 piers, reducing the impact on waterways, roadway and rail operations below. In addition, the bridges' inside shoulders in both directions will be built to serve as Flex Lanes for transit, for emergency vehicles and as an alternate lane when warranted.