Identified Technologies has been selected to support a large surface mining project in Western Pennsylvania. 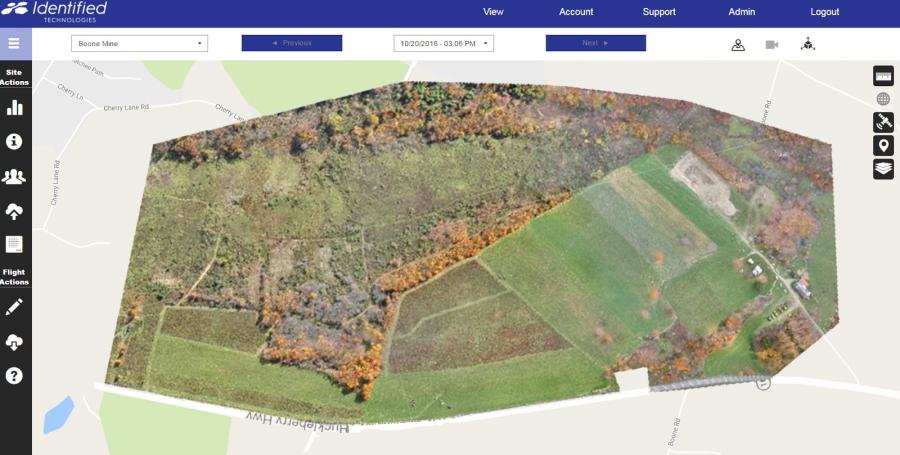 A Drone-captured orthomosaic model of Boone Mine in Somerset County, Pennsylvania.

Identified Technologies has announced that it has been selected by Bentley Development to support a large surface mining project in Western Pennsylvania. Established in 1971, Bentley Development now performs a combination of mining operations, landfill construction, and commercial site development.

Currently, Bentley is conducting surface mining operations at a 180-acre site in Somerset County PA, and will use Identified Technologies' fully-integrated mapping and measuring systems to track their progress and profitability.

Phil Shumaker, Vice President of Operations at Bentley said, “We typically get paid on the quantity of earth we move, and Identified helps us verify this quantity. Previously we used ground topography, but drone mapping blows our GPS away in terms of speed and data accuracy. It also saves our survey team a lot of time. In the past, it could take 3-4 weeks to capture and analyze the progress using traditional methods. With Identified, we were able to survey 180 acres in a couple hours, and receive the survey data that same evening. In our business, speed is crucial, and cutting time spent surveying makes accurate invoicing, and collecting payments much faster.”

Dick Zhang, CEO of Identified Technologies comments “Identified Technologies creates topographical job site maps in a fraction of the time of traditional methods. Getting the data faster helps to prevent mistakes because of uninformed decisions, and keeps everyone on the same page. Generally, clients see survey savings of 70%-90% on their projects, and when you factor in avoided personnel injuries and early detection of problems, the value per job is often in the millions of dollars.”

Shumaker concluded, “This will also be a tremendous marketing tool for us to win new business in areas like site development and landfill construction. The ability to show potential clients before and after 3D graphics of our work gives them more confidence than describing it on a conference call ever could. Now we're not just asking them to take our word for it, we're bringing the real project right to them.”