The tunnel will replace the Alaska Way Viaduct, an elevated double-deck road that is part of state Route 99 and an important corridor through Seattle. 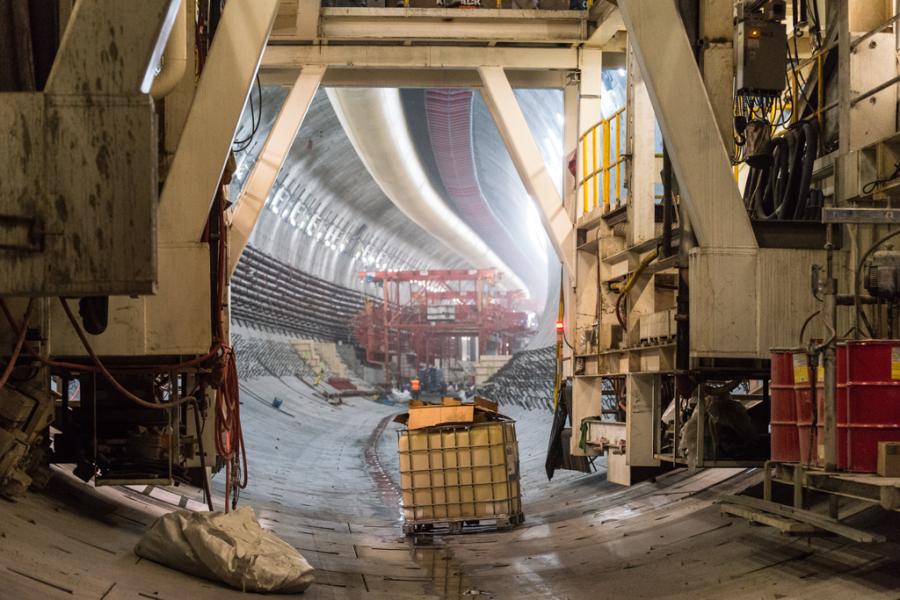 WSDOT photo. Looking south at the SR 99 tunnel from the back end of the SR 99 tunneling machine on May 12, 2016. From this viewpoint, you can see that the tunnel takes a slight westward turn as it heads under downtown Seattle near Yesler Way.

Three years after the tunneling machine dubbed “Bertha” began work on a 2-mi. (3.2 km) tunnel beneath the city of Seattle, the machine has passed the half-way point. Bertha pushed past the Pike Place Market on Sept. 30, successfully excavating more than 4,635 ft. (1,413 m) of the 9,270-ft. (2,825 m) tunnel, said Washington Department of Transportation spokeswoman Laura Newborn.

The tunnel will replace the Alaska Way Viaduct, an elevated double-deck road that is part of state Route 99 and an important corridor through Seattle. Built in the 1950s, the viaduct sustained damage in a 2001 earthquake. In 2009, the Washington State Legislature agreed to replace the viaduct with the tunnel. In 2011, the southern mile of the viaduct was demolished and replaced with new roadway.

WSDOT awarded Seattle Tunnel Partners a $1.35 billion contract to design and build the tunnel, which includes a double-deck highway inside the tunnel, tunnel entrances and exits and two tunnel operations buildings. The price tag for the entire Alaskan Way Viaduct project is $3.1 billion.

Much of the progress has been made in the past five months with the machine tunneling more than 3,000 ft. (914 m) since a planned maintenance stop in April, according to a press release from WSDOT.

“Bertha has been steadily on the move and made her way to the second half of the tunnel,” said Washington Gov. Jay Inslee. “This is good progress and I appreciate everyone's focus on making sure we safely complete this project.”

The tunneling has not always gone so smoothly. In December 2013, work on the tunnel came to halt after high temperatures were registered on the tunneling machine. A little over 1,000 ft. (304 m) had been excavated at the time. It was determined there was damage to the seal system on the machine. The manufacturer, Hitachi Zosen chose to repair the machine from the surface, requiring construction of an 80-ft. (24 m) wide, 120-ft. (36.5 m)-deep access pit in a work zone west of the Alaskan Way Viaduct. Between March and August 2015, Hitachi Zosen installed a re-designed seal system and made additional repairs to the machine, then lowered the front end back into the ground. In December 2015, STP refilled the access pit and again began tunneling.

Bertha is now about 190 ft. (58 m) below First Avenue between Pike and Pine Streets, according to WSDOT. Crews will continue mining for a short time and then stop for about a month to perform planned maintenance.

“While STP's crews are making progress, they are also taking time for routine maintenance to help ensure the machine successfully completes the tunnel drive,” WSDOT said. “Like previous maintenance stops, crews will use the upcoming stop to inspect machine components and replace cutterhead tools in hyperbaric conditions. STP expects this round of maintenance to last approximately one month, but it could take more or less time depending on the extent of work needed.”

The two-year delay has prompted WSDOT to request an additional $60 million from the state legislature for the 2017-2019 budget cycle to continue progress on the project. The team has completed 21 of 31 projects in the viaduct replacement plan that will reshape SR 99. Five additional projects are under way and five more are in the planning stages.

The “finish line” is a 90-ft. (27 m)-deep receiving pit at the north end of downtown Seattle and, along with many other aspects of tunnel portals, is largely complete, WSDOT said. Future contractors will make the final connections to the highway, but several of the ramps and roadways into and out of the tunnel are already in place.

“This program turned a corner earlier this year,” said Secretary of Transportation Roger Millar. “We're now closer to the end of the tunnel than we are to the beginning, and everyone on the team is working toward the day when the machine comes out on the other side.”

The most recent schedule calls for tunneling to wrap up in the summer of 2017.

“Work to complete the tunnel's interior structures, along with installing and testing systems should be finished by late 2018. Based on STP's schedule, WSDOT estimates the tunnel would open to traffic in early 2019 when crews finish connecting the tunnel to the existing SR 99 roadways.”