Bertha Breaks Through: Iconic TBM Emerges Into Daylight in Seattle 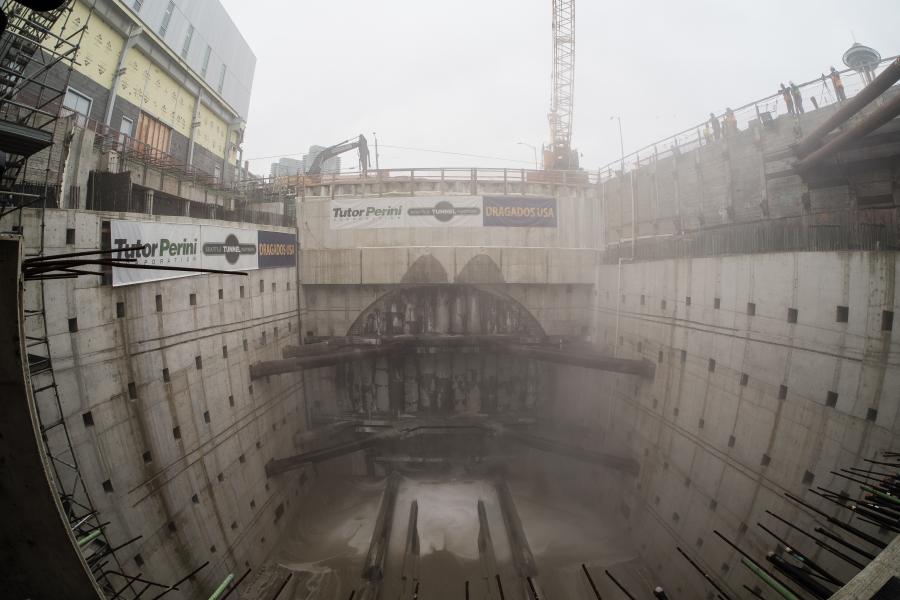 Before breakthrough: The SR 99 tunneling machine’s disassembly pit prior to Bertha’s breakthrough on April 4, 2017.

Sixty-four years to the day the Alaskan Way Viaduct in Seattle opened to traffic, the tunneling machine dubbed “Bertha” emerged into daylight from a 1.7 mi. (2.7 km) drive beneath the city. The crew broke into the 90-ft. (27 m) deep disassembly pit at 11:25 a.m. on April 4, just short of four years after the tunneling work began in July 2013.

Led by the Washington State Department of Transportation (WSDOT), and designed and built by contractor Seattle Tunnel Partners, the tunnel project will move a 2 mi. (3.2 km) section of SR 99 underground when it wraps up in early 2019. Crews will then demolish the viaduct, clearing the way for the city's new waterfront, said WSDOT spokeswoman Laura Newborn.

“This is a historic moment in our state's transportation history,” Gov. Jay Inslee said. “Innovation and perseverance are the engines that keep Washington in the forefront. There is still more work ahead but this moment is one worth celebrating.”

The tunnel contract is $1.4 billion. The adjoining road projects bring the total tunnel costs to $2 billion, Newborn said, noting that it is not accurate to say the tunnel cost $3.1 billion as that is the cost of the entire program to replace the viaduct (32 different projects-including viaduct demolition and Battery Street Tunnel decommissioning).

Crews spent several days removing steel support braces that stand between Bertha and the interior of the disassembly pit, Newborn said. When the braces are gone, crews will drive the machine into its final position and begin cutting it into pieces for removal. Seattle Tunnel Partners, owner of the machine, will determine which pieces could be salvaged for use on other projects or recycled.

“We were always confident that we would successfully complete the tunnel drive,” said Chris Dixon, Seattle Tunnel Partners project manager. “The dedication and commitment of everyone on the Seattle Tunnel Partners team has been exceptional, and we wouldn't be at this milestone without the hard work of our crews. We look forward to continuing this outstanding progress through project completion.”

STP still has significant work to complete before the tunnel opens, Newborn said. Crews must finish building the double-deck highway within the circular walls that were built by crews inside the tunneling machine. Mechanical and electrical systems, plumbing and safety features also must be installed.

“Even as crews are installing these systems, crews will begin the extensive task of testing and commissioning the tunnel to ensure it's ready for traffic,” Newborn said. Inspectors will individually test more than 8,500 separate components before testing each of the tunnel's various systems as a whole.

“This truly is a remarkable feat of engineering,” Transportation Secretary Roger Millar said.

“There's still work to be done, but the individuals working on this job should be proud of this accomplishment.”

The tunneling has not always gone so smoothly. In December 2013, work on the tunnel came to halt after high temperatures were registered on the tunneling machine. A little over 1,000 ft. (305 m) had been excavated at the time. It was determined there was damage to the seal system on the machine. The manufacturer, Hitachi Zosen chose to repair the machine from the surface, requiring construction of an 80-ft. (24.4 m) wide, 120-ft. (36.5 m)-deep access pit in a work zone west of the Alaskan Way Viaduct. Between March and August 2015, Hitachi Zosen installed a re-designed seal system and made additional repairs to the machine, then lowered the front end back into the ground. In December 2015, STP refilled the access pit and again began tunneling.

It remains unclear how the machine was damaged.

What caused the damage is a matter of litigation.”

Over the next several years, the Waterfront Seattle project will build new public space and a surface boulevard in the place of the double-deck viaduct, which is scheduled for demolition in 2019.

“Today is a major construction milestone in our plan to reclaim Seattle's waterfront,” Seattle Mayor Ed Murray said. “We are one step closer to taking down the viaduct to make way for a reimagined waterfront and surrounding downtown neighborhood. We will build a waterfront for pedestrians, transit and sensible car trips without a freeway wall casting a shadow over our vision of a well-connected 21st century city.”

• The bored portion of SR 99 tunnel is 1.7 mi. long. Cut and cover construction at both ends brings the tunnel length to 2 mi.