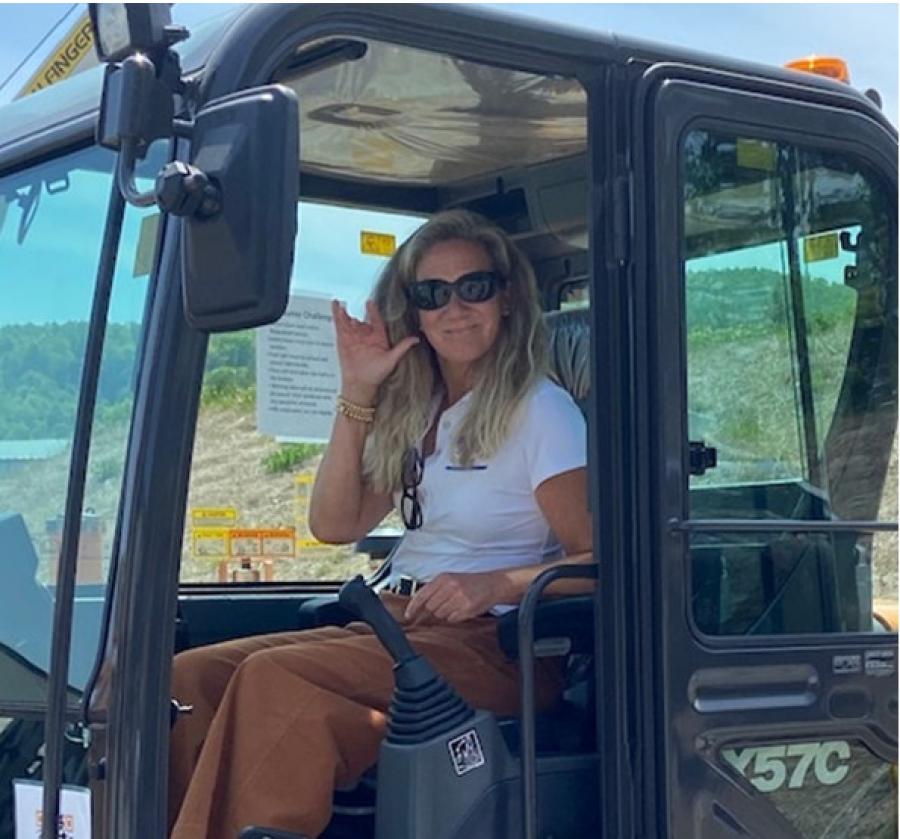 Beth Bartow grew up in the heavy equipment industry, while the industry grew and changed around her. Currently the Case business manager southeast of Case Construction, Bartow's first job in high school, unbeknownst to her, would be the start of a lifelong career that would span decades and several countries around the globe.

"I started working for Hoffman Equipment, in Piscataway, N.J., when I was in high school. It's a family-owned business. I started filling in during school vacations. They asked if I wanted to come on board and work in sales. The people were super, and it was an interesting business. My education really started there," said Bartow, whose first role in inside sales gave her the opportunity to learn the whole business, including accounting, parts and service.

Bartow stayed with the Hoffman family for several years. But just like living at home, there comes a time when you need to leave the nest. She was offered a position with Daewoo Equipment as an inside sales manager and accepted this new challenge.

"I learned so much working there," she said. "I was there for a few years. They were moving their offices to Atlanta, and I didn't want to move there, so I went back to Hoffman as a territory sales manager covering Staten Island and surrounding counties. You can always go back home again."

A woman in the role of territory sales manager was unusual in the mid 1980s, particularly in the New York City metropolitan area.

"Being a woman territory sales manager was innovative and not something you saw out there a lot, especially in New York and New Jersey," she said. "I was there for a period of time, got some great sales experience, and then it was time to go."

Over the next several years, Bartow held a variety of field sales roles for some heavy hitters in the industry, including H.O. Penn in Connecticut and ALLU Manufacturing in New Jersey. Her big break came when a headhunter working on behalf of Caterpillar Redistribution Services contacted her to discuss filling the role of senior sales regional manager, working out of Florida. She accepted the job and headed south, successfully growing Caterpillar's used equipment and rental business.

"In 2007, I got an expat role based in England with northern Europe as my territory," she said. "My role was to get in there and help build their redistribution, evaluate used equipment sales, propose new ideas and evaluate the used equipment managers at these European companies."

"What was interesting was here I was this ‘pushy American woman' coming in and telling these men how to run their used equipment business," she recalled. "To this day, I'm thankful to Cat for that experience. It helped me grow as a person and as a businesswoman. It was an experience that you don't get every day."

After two years in this role, Bartow returned to the United States. She held senior sales manager roles with Cat's used equipment division, Terex and Volvo. She then took her vast experience in the construction equipment industry to software manufacturer Decisiv Inc. as director of business development. She was there for five years before an opportunity opened with Case as dealer development manager.

"I started with Case in September 2021. They had a reorganization with the purpose of becoming more customer-facing. In March of this year, I was asked to take over the role as the Case business manager, southeast," said Bartow, the only female field regional business manager in the company. As business manager, she covers the Case dealers from Florida to North Carolina.

Bartow's success has not come easy and certainly not without its challenges, but she's happy with the path she chose.

"I wouldn't change it for anything. I never thought I would get into construction. I thought I was going into retail and fashion. Construction was easy; it was like being home. It felt comfortable. This is what I know. Each move I made was a platform to the next.

"Everywhere I go, I have to prove myself to somebody," she added. "I don't see men having to prove themselves when they come into the field. One of the best pieces of advice I got early in the industry is to just be a sponge and soak up everything, so that's what I did. The thing I've found in my travels is that there are people who will help you along the path and I've been very fortunate to have some very good managers to help me."

Bartow will gladly offer advice to women looking to break into the construction industry, but her most important piece of advice comes before a decision is made.

"Interview, interview, interview. Make sure you're going to be the right fit for that location. They will dazzle you with an offer, but see where the opportunities are for growth. You're not going to want to stay in that position for the rest of your life. Are they providing the tools to help you grow? Then that's the place you want to be." CEG