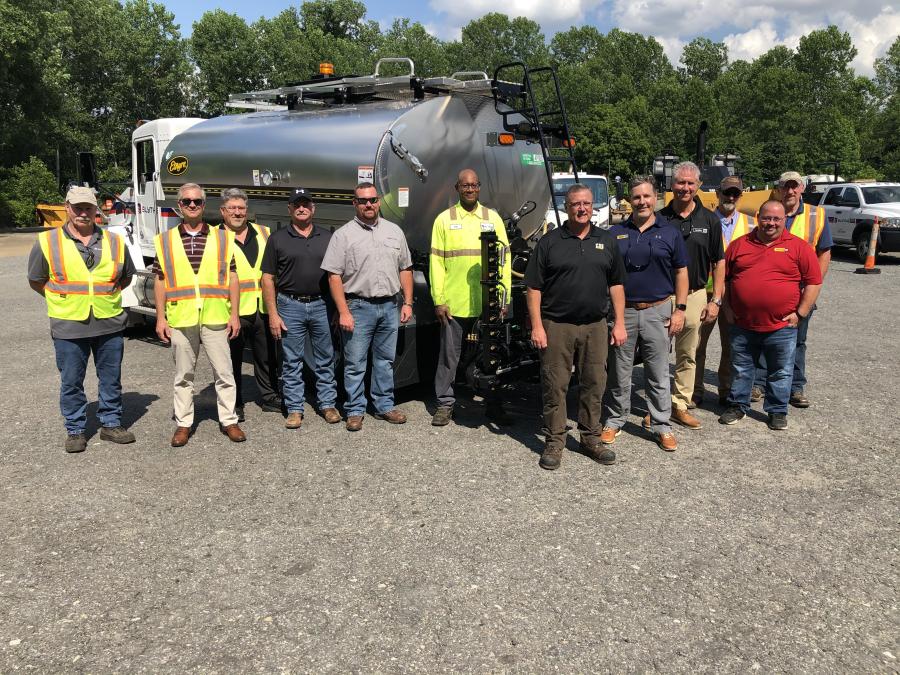 Charlotte-based Blythe Construction Inc., one of the Southeast's leading heavy construction companies, recently unveiled a new piece of equipment designed to reduce the firm's carbon emissions from its paving operations in North and South Carolina.

In doing so, Blythe hopes to join a growing list of corporations that are establishing themselves as environmentally responsible. It is also in keeping with a directive from its parent company, Eurovia, a French multi-national, to reduce the corporation's overall carbon footprint by 40 percent by 2030.

As a long-time partner with Etnyre, the Oregon, Ill., maker of liquid asphalt distributors, Blythe and Eurovia asked the manufacturer if it could design an asphalt distributor that could heat liquid blacktop without using diesel or liquid propane gas, the traditional methods for warming asphalt in a tank before spraying onto a road surface.

If a machine could be made by Etnyre that had the eco-friendly capabilities needed by Blythe, the construction company would purchase the modified distributors from another of its partners in good standing, Carolina Cat, a Charlotte-based construction equipment dealership.

Through expert design and engineering, Etnyre has created and unveiled its new Green Distributor product, envisioned as a step forward in producing and refining distributor trucks that lower the carbon emissions normally created by standard burner heating systems.

According to Jonathan Law, Carolina Cat's Paving Division manager for the equipment dealership's western half of North Carolina, "When Carolina Cat pursued Etnyre to be their dealer, we did so to align ourselves with the clear-cut industry leader and a manufacturing partner for asphalt distributors and other products that, like the Green Distributor, are the result of innovative thinking," he said. 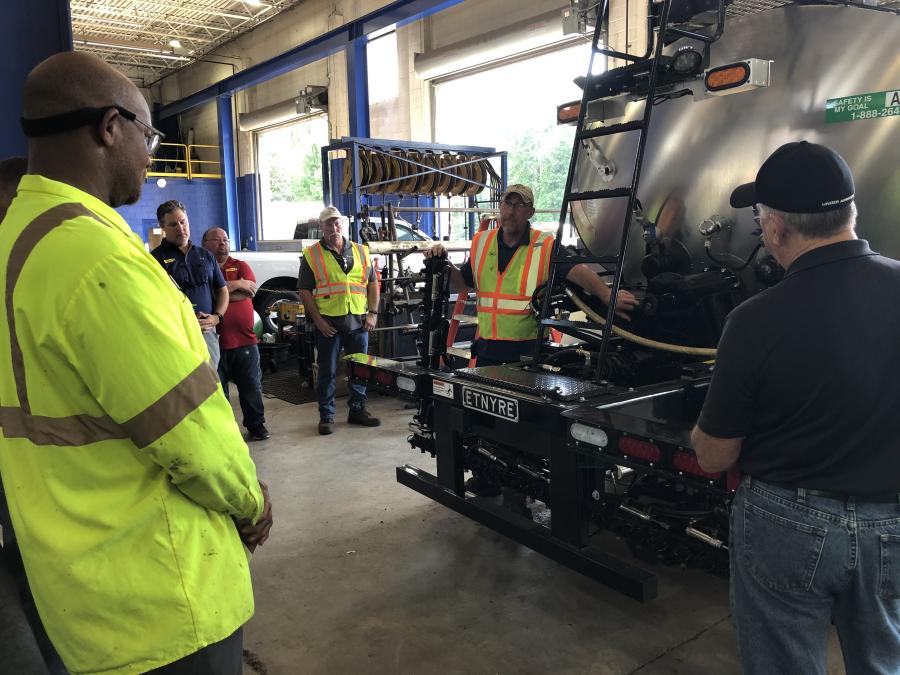 "The traditional heating system on distributors has always utilized either liquid propane gas [LPG] or diesel-fired burners, which project fire down a flue to heat the product in the tank, while releasing the emissions exhaust into the atmosphere," he said. "With Etnyre's Green Distributor, these traditional burners, along with the heating tubes, have been removed from the tank and replaced with electric resistance heaters. The system is made up of two element-style heaters that fit into small diameter heat tubes welded into the tank. By removing the traditional large diameter heat tubes, it allows the process heat system to be placed so low in the tank that only a minimal amount of product is required for heating."

When the Etnyre unit is in motion or on the job site, an onboard 15 kW hydraulic-driven generator is provided so the unit can heat material, such as asphalt, in the field and while in transit. The heaters and generators are powered by the Tier V diesel engine on the truck chassis — the lowest emissions solution available in trucks today, Horner said. When the distributor is stationary at a shop or asphalt plant, it can be plugged into an electrical outlet to keep the product in the tank hot, thereby reducing heating times for the following day's work.

"Another advantage of using electric heat is that it provides a ‘softer' heat source versus direct fired heaters, making it better for maintaining the quality of today's complex asphalt products," he added.

In addition, the Etnyre Green Distributor, like all distributor trucks, must flush its circulation system after use to remove any of the residual product it used before it hardens inside the pump and spray bar.

"This will further reduce carbon emissions by resulting in less petroleum waste product," he said.

On June 21, Blythe Construction's paving headquarters on Wilkinson Boulevard in Charlotte was the site of an event to showcase Etnyre's eco-friendly asphalt distributor. The truck-mounted Green Distributor was specifically designed and engineered by Etnyre at the request of John Sharp, equipment director of Eurovia USA.

Among the guests for the product's demonstration were managers at Etnyre, along with executives and technical staff from Hubbard Construction in Florida (also owned by Eurovia) as well as salespeople and technicians with Carolina Cat and Ring Power CAT, the Central & North Florida Caterpillar dealer that serves Hubbard.

Law told the assembled group that he sees the eco-friendly Etnyre distributor as being a "significant solution, from an asphalt distributor standpoint, for larger, socially responsible companies that want to lower their carbon footprint."

He added that the development of the Etnyre Green Distributor for paving roads, bridges and other surfaces, "was all about answering the demand from the customer [Blythe], which was given the directive of lowering its overall carbon footprint with equipment, fleet and asphalt plants, and Etnyre answering the call by designing its product in such a way that meets that customer's needs. Hats off to the Etnyre team for saying yes and putting themselves and their dealers in an exclusive position that I expect will grow with other companies over the next few years."

Shane Clark, asphalt area manager of Blythe Construction, noted that his company has a fleet of 10 Etnyre distributor trucks in the Queen City that run day and night. He cited the product and the service he receives from Etnyre and Carolina Cat as being outstanding. 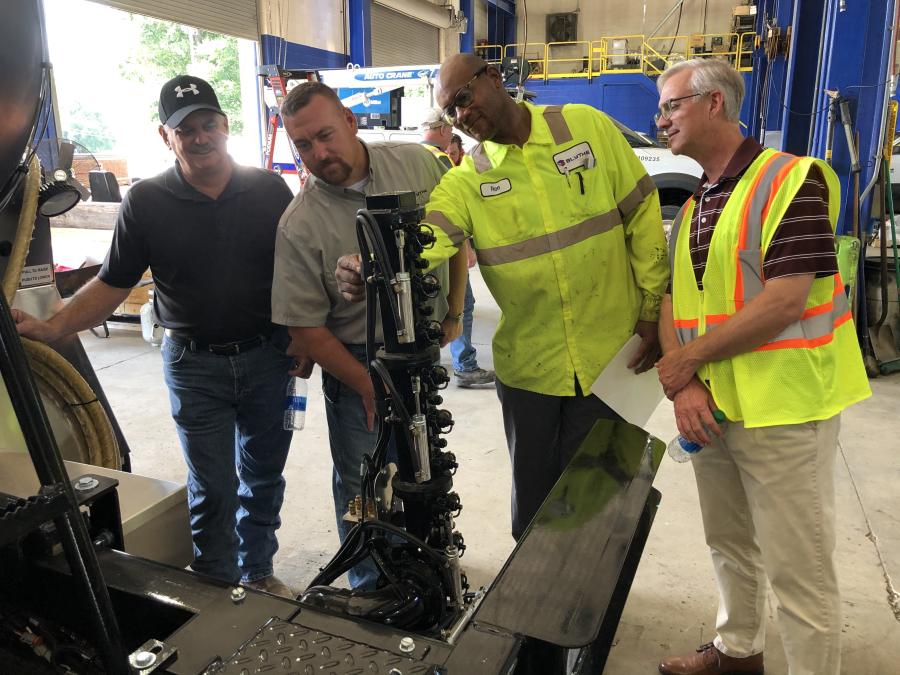 "We partner with Carolina Cat on just about all our equipment and service is a big part of the reason we use them," he said. "The products that it carries have always been great for our business. We team with Carolina Cat to make sure we have equipment that is going to run 100 percent of the time and when we need something repaired, we know it will be done right."

Meeting the environmental goals set by Eurovia USA's companies will be a challenge for Blythe, though, as the construction company continues to play an integral part in the Carolinas' constant growth. To do that properly, it operates a mega fleet of heavy equipment, trucks and support vehicles — all of which need to meet Eurovia's stringent standards.

"Having these Etnyre asphalt distributors is just one step in doing our part to reduce greenhouse gasses," Clark said. "Our entire company is looking more toward utilizing the environmentally friendly process for our asphalt plants, for our trucks, and going hybrid with our vehicles.

"If this is done right, we can make a significant dent in our carbon footprint," he added. "We are part of a large group in Eurovia that operates from Maine to Florida to Texas, with Blythe's work focused on the Carolinas. The entire Eurovia group is poised to make a major reduction in our carbon footprint when each member of the group is ready."

To cut Eurovia's global carbon output by 40 percent by the target date of 2030, Sharp said that, as far as its equipment is concerned, one task that the corporation employs is to monitor the idle times for each of its machines.

Obviously, production equipment allowed to run idle not only wastes money and accelerates wear on their components, but they also burn carbon fuels that end up harming the environment.

"The best way to put this is to say we want to reduce our overall idle time for our vehicle fleet by 20 percent by 2030," he said. "The asphalt distributors fall into that because they currently run about a 58 percent idle time. By having the electric distributor on the back of the truck, we expect to reduce our idle time to below 30 percent, which would represent a 28-30 percent reduction overall.

"On the heavy equipment side — dozers, wheel loaders and excavators, for instance — we are looking to reduce our idle time below 30 percent per machine by 2025, and then an additional five percent by 2030," Sharp said. "Eventually, we want all our machines to idle less than 25 percent of the time by 2030. That is currently about a 20-25 percent reduction on average."

Horner noted that the new Etnyre Green Distributor was the brainchild of several people at his company and at Eurovia and Blythe.

"This project has allowed all parties an opportunity to express their ideas and ultimately create a new product to not only improve our industry, but also to protect our environment," he said. "Etnyre is committed to our customers and our environment, and we are proud to have been a part of making this distributor." CEG