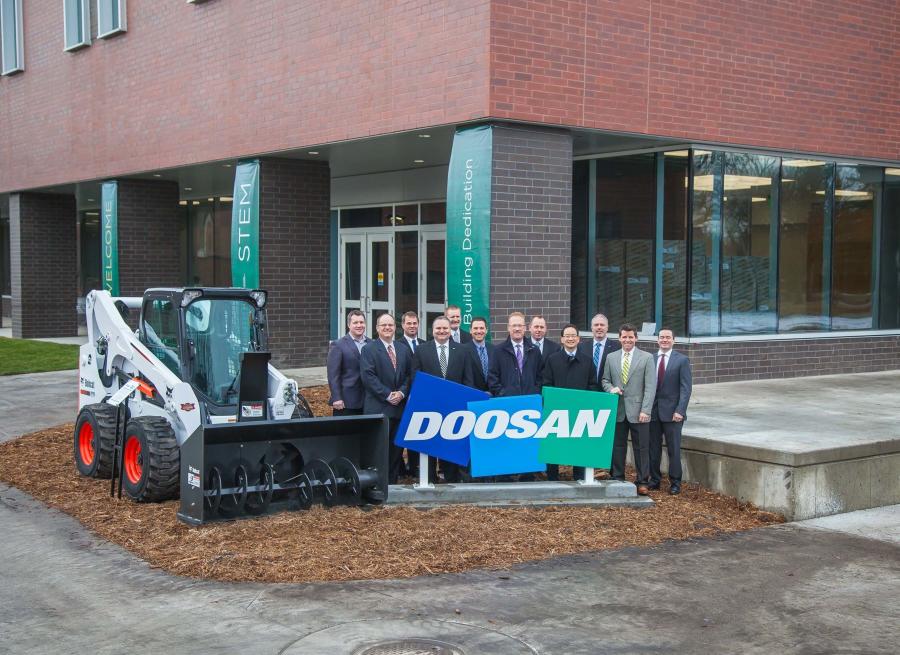 According to NDSU, the cross-functional design of the facility — which officially opens to students in January — breaks from the tradition of an academic building belonging to a particular discipline or department. It is a student-focused structure made up entirely of classrooms, labs and study areas, with an emphasis on STEM courses. It also is the first building of its kind at NDSU and in North Dakota, designed for flexibility, interdisciplinary collaboration and teaching innovation.

In September, Doosan, Bobcat Company and NDSU announced the 2015 academic year scholarship recipients benefiting from an endowment funded by a $3 million donation from Doosan and Bobcat Company and $1.5 million from the state of North Dakota. The initial scholarship distribution awarded $2,000 to 10 students. When fully funded, the endowment will distribute approximately $180,000 in scholarships per year in perpetuity, benefiting countless students and their families.

“We have a vested interest in nurturing future innovators,” said Rich Goldsbury, president of Doosan and Bobcat Company, North America and Oceania. “Whether graduates from these programs end up working for Doosan and Bobcat Company or other organizations in the region, having more technology-minded individuals in our communities is a benefit to all of us.”

Doosan and Bobcat Company began a research partnership with NDSU in 2005, becoming the anchor tenant at the NDSU Technology Incubator, part of the NDSU Research and Technology Park. Through the partnership, Bobcat established engineering and product testing facilities that include 15,000 sq. ft. of floor space for up to 50 Bobcat employees, a working technology lab and an indoor machine testing area.

The partnership expanded in 2013 with a one-time $400,000 donation from Doosan and Bobcat Company, and $200,000 in additional grants through North Dakota’s Centers of Excellence. The program paired research and development hubs across the state’s university and college campuses with private companies, in an effort to stimulate greater economic growth.

“Our collaboration with NDSU is already strong, and this facility will help make it even stronger,” Goldsbury said. “What’s most exciting is that there is no end to the potential — we will all continue to benefit from students who go through these programs and study in this building five, 15 and 20 years from now.”

Goldsbury added that much of the work done collaboratively between Doosan and Bobcat and NDSU students can impact global development and production of Bobcat equipment and Doosan equipment.