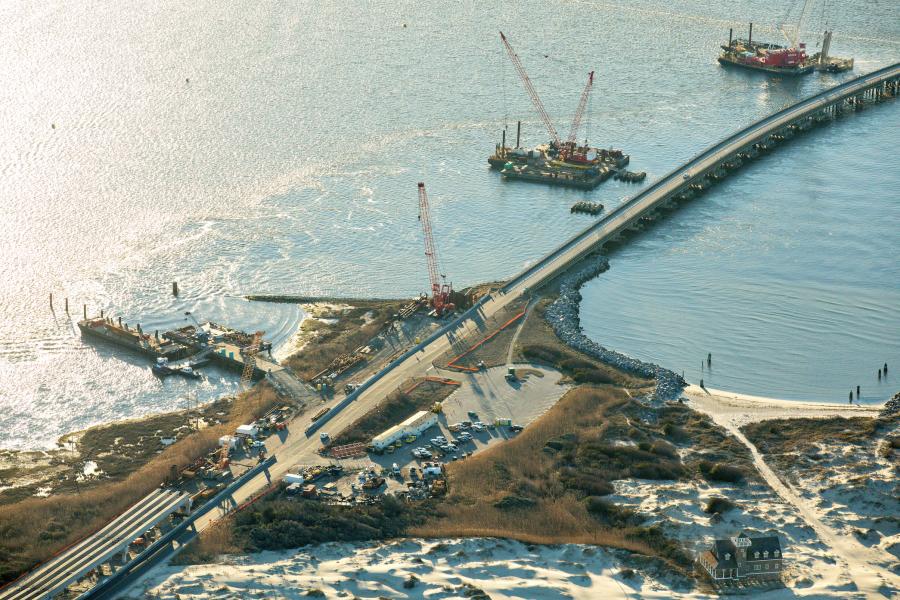 Heavy construction has moved into its second year on a long-awaited and vital bridge along North Carolina's Outer Banks.

When opened for traffic in the fall of 2018, the $246 million replacement for the Herbert C. Bonner Bridge will more easily move vehicles and people up and down N.C. Highway 12. Spanning across the Oregon Inlet, the new 2.8 mi. long bridge, like the one in use today, will connect Bodie Island and Hatteras Island.

More significantly, the current Bonner Bridge and the highway are the only road links from the mainland and the northern Outer Banks to the more remote and famous southern areas, which include Cape Hatteras, Rodanthe and Ocracoke Island.

The old bridge, built in 1963, passed its projected lifespan in the early 1990s and over the years has been pounded by the countless storms that move across North Carolina's famed barrier islands to and from the Atlantic Ocean. Upgrades to the bridge have kept it functional, but the combination of wind, rain, surf and salt have eaten away at the structure.

Finally, funds were secured to build a replacement and the North Carolina DOT awarded the contract to design-build the new bridge to PCL Civil Constructors Inc. in Raleigh in 2011.

However, almost immediately, concerns over the structure's impact on the surrounding ecosystem resulted in lawsuits by environmental groups to stop the project in 2013 before any on-site work began. The entire area is part of the Cape Hatteras National Seashore and the immediate bridge site itself is within the larger park's eco-sensitive Pea Island National Wildlife Refuge.

Those legal challenges were finally resolved, though, in the summer of 2015 and the bridge work formally began on March 8, 2016.

Whistling Past the Graveyard

The sleek new stainless reinforcing steel and high-durability concrete bridge is designed to protect against corrosion and withstand the stormy seas that for centuries have caused enough shipwrecks for the area to be labeled “The Graveyard of the Atlantic.”

The structure will utilize the typical pile beam and cap system across the majority of its length, but the main navigation span will be a pre-cast segmental with variable-depth box units.

Pablo Hernandez, the NCDOT's resident engineer overseeing the project, said that over the last year, work has begun at three different sites to erect the new bridge.

“On the north end of the project we are working in the marsh and shallow waters and have so far [as of the third week in March] installed 10 bents of 54-inch cylinder piling,” he explained. “Out in the water where the navigation spans will be, we have about nine clusters of piles installed, which are made up of anywhere from 14 to 30 piles to a cluster, to form the footing and the substructure of the high rise. Then, in our third site at the very south end of the project we have six bents of 54-inch pile installed and we are just starting to transition into the 36-inch piles in that area.”

Hernandez added that as a result of that work, PCL's crews have six spans of girders in on both the north and south ends, with an additional four spans of bridge deck cast on the north shore.

“Out in the inlet, on our piling clusters, we have cast three large footings or pile caps and on one of those, we have already erected the pre-cast column sections to their full height such that we can then start setting the superstructure segmental box units,” he said.

Originally, the bridge's design called for galvanized steel or a metalized carbon steel, Hernandez said, but the DOT decided to upgrade to using all stainless steel.

“With a bridge like this with a 100-year design life, these upgrades will be worth the initial expense, due to the elements out there,” he said. “That doesn't mean that maintenance will not be needed over that lifespan, but we are doing what we can now to lessen that need over the years.”

Contractor Doing All the Heavy Lifting

PCL is performing most of the work itself and has brought in a number of pieces of heavy equipment to erect the Bonner Bridge replacement.

According to Hernandez, among the machinery on site are several Manitowoc 999 cranes, some Liebherr 1200 cranes and a Manitowoc 2250 — all of which are either on shore or on temporary work trestles. Also in use on barges on the inlet are cranes from Weeks Marine in Cranford, N.J., a marine and dredging specialist.

Additionally, two Manitowoc 4100 and 4600 ringer cranes are working in the Oregon Inlet.

“Plus we have all kinds of hammers and other equipment out here, including one of the largest hammers operating in the state, a BAUER-Pileco D-180.”

He added that at any one time, between 90 and 110 people are working at the bridge site.

The type of work being done now on the Bonner Bridge replacement will continue throughout the rest of 2017, he said. One addition to that is the setting up of false work or shore towers used to start erecting the first sections of the superstructure segmental box sections. These are temporary steel frame towers that add an additional work place or work platform.

“When we erect the first four to six box segments we need to do so using some very high-strength scaffolding that is fixed to the footings,” he said. “That tower just gives us some extra support for these first few pieces until they are all positioned together and aligned correctly.”

Hernandez said that at times, lanes closures are needed when PCL offloads material to the work trestle that runs parallel to the existing bridge or directly onto a barge. The new span is being built just west of the Bonner Bridge, with their proximity being anywhere from 50 to 189 ft.

“Work is picking up this summer, but we did have a relatively mild winter from my experience being out here on the Outer Banks,” Hernandez said. “We were able to get several large concrete pours in and even our smaller pours were not as restricted by temperatures.”

At times, only one of the two lanes of N.C. 12 are closed in the work zones with flagmen directing the flow of vehicle traffic. During the summer tourist season, PCL will not be able to close lanes at all during the day, but only on Monday through Thursday evenings.

That should keep the heavy tourist traffic flowing seamlessly to an area heavily dependent on summer visitors for its economic vitality.—CEG