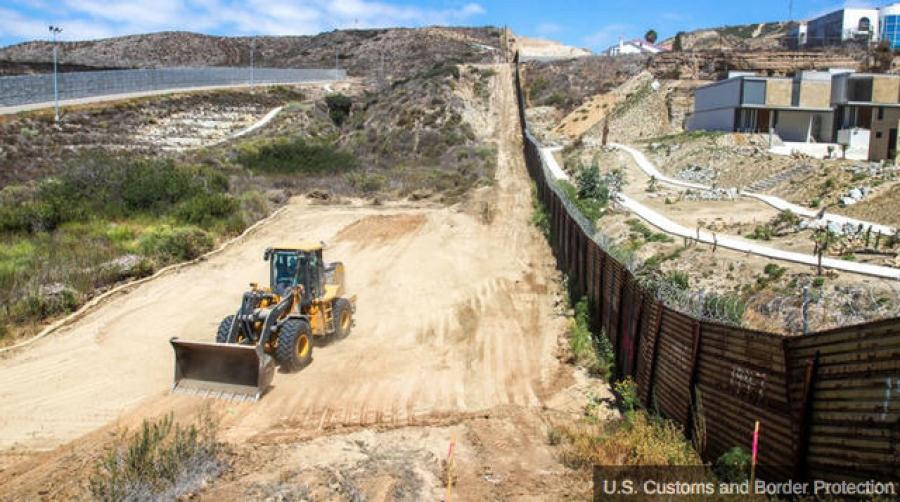 The construction project will replace approximately 14 mi. of 8-to-10 ft. high scrap metal wall with an 18-to-30 ft. bollard-style wall topped off with an anti-climbing plate.

The construction project will replace approximately 14 mi. of 8-to-10 ft. high scrap metal wall with an 18-to-30 ft. bollard-style wall topped off with an anti-climbing plate. The project begins approximately one-half mile from the Pacific Ocean coastline and extends eastward to the base of Otay Mountain in East County San Diego. The $147 million contract for this project was awarded to SLSCO, a Texas-based construction corporation.

The San Diego Sector wall construction is one of Border Patrol's top priority projects. Wall in this area was built in the 1990s out of recycled scraps of metal and old landing mat steel plates left over from the Vietnam era. The 8-to-10 ft. high wall was intended to aid in re-establishing the border and aided in preventing both pedestrian and vehicle crossings. Although the existing wall was proven effective, the cross-border threat has increased and the several decades old corrugated steel landing mat is in need of replacement with a higher performing design.

“Under this President's leadership, we have a renewed commitment to secure our border,” said Ronald Vitiello, U.S. Customs and Border Protection's acting deputy commissioner. “The new primary wall-project represents an important milestone in our work to secure the international border. Not only does it significantly upgrade our existing infrastructure in San Diego, it also marks the third concurrent wall project in the U.S. and reflects CBP's unwavering commitment to secure our borders and protect our nation.”

The other two border wall projects currently in progress include 2 mi. of primary wall in Calexico, Calif., and 20 mi. of new border wall in Santa Teresa, N.M.

The U.S. Border Patrol's San Diego Sector (SDC) continues to experience a high number of arrests resulting from illegal entries and drug smuggling. In fiscal year 2017, SDC, which covers a mere 60 mi. of land border with Mexico, apprehended 26,086 illegal aliens and seized 10,985 lbs. of marijuana; 2,903 lbs. of cocaine; 4,123 lbs. of methamphetamine; and 5,707 oz. of heroin. During that same fiscal year, there also were 83 assaults against SDC Border Patrol agents.

Leadership within SDC will collaborate with local and state authorities to address any issues that may occur during the border-wall construction period. As in the past, the Border Patrol will continue to work diligently with supporting agencies to ensure its presence minimally disturbs the surrounding environment and habitat. The overall project should have minimal impact to the public and their daily activities.

“The construction of this new substantial wall will improve overall border security, the safety and effectiveness of Border Patrol agents, the safety of the public, and will enhance the atmosphere for business and commerce in the area,” said Rodney Scott, chief patrol agent of the San Diego Sector.