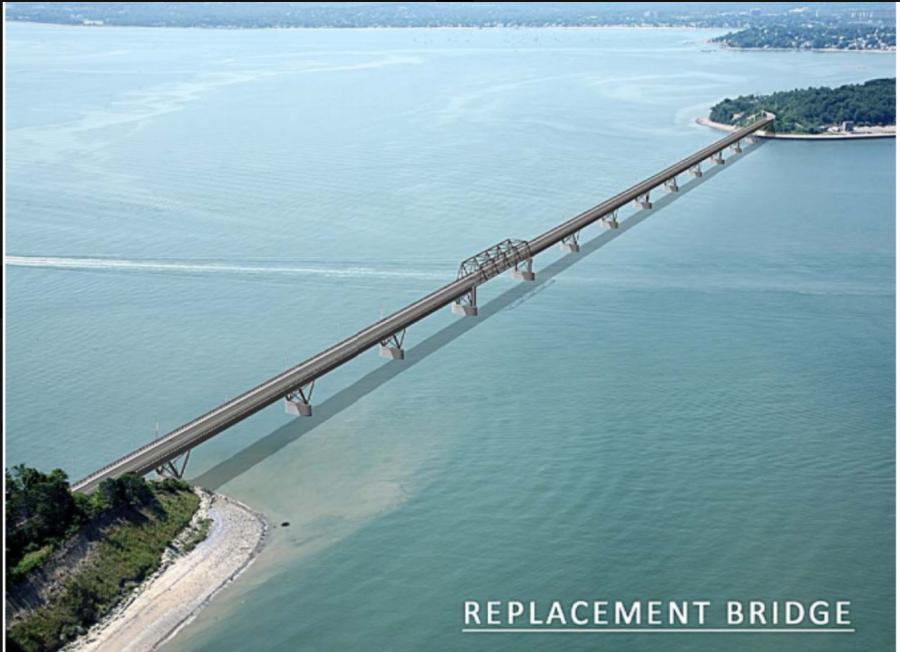 A rendering of the proposed Long Island Bridge.

A plan to prepare a stabilization package for the buildings on Boston's Long Island, where the city continues to one day envision an addiction-recovery campus, is again in the works, with the added hopes of rebuilding a bridge to it this fall.

Sources in Boston Mayor Michelle Wu's administration told the Herald the second week of March that the amount of cash the city is looking to put toward stopping the deterioration of the already dilapidated buildings on the island is still to be decided.

Located in Boston Harbor, Long Island is 1.75 mi. long and covers a total of 225 acres.

Documents outlining a "master plan," created during former Mayor Marty Walsh's term, called for a complete overhaul of the island to the tune of $80 million to stabilize all the buildings there, according to the results of a Herald record request.

Wu administration officials, made available to speak about the plan to the newspaper, said they are not looking at a package that big.

The mayor has said she envisions the island as a mid- to long-term solution to help rid the scourge of addiction that continues to plague the city and its surrounding area.

"During Mayor Wu's visit to Long Island [in January], the need to immediately stabilize and secure some of the existing public health facilities to prevent further deterioration was evident," her office said in a statement to the Boston Herald. "Mayor Wu has authorized [the Public Facilities Department] to develop and pursue a stabilization program for the existing facilities while we engage in our own planning around Long Island and the great potential it has to support Boston's recovery and supportive housing needs."

There is, however, still the ongoing debate over rebuilding a bridge to the island.

The Walsh-era documents detailing the overall plan are about the island itself, while barely mentioning the bridge needed to get there. What that plan does present are different dollar amounts for work on the island depending on whether there is a bridge during construction.

That would create up to 124 beds of the 500 visualized in the broader $540-million-plus primary plan, which saw no further action after Walsh was chosen by President Joe Biden in early 2021 to serve as U.S. Secretary of Labor.

Walsh always intended to rebuild the bridge, which his administration considered the only viable option for using the small island as a recovery center.

The bridge construction effort — which Walsh's administration put at $80 million, though other estimates have placed it higher — would replace the former span that the city removed in 2014 due to its deterioration.

Although the bridge is in Boston, the only way to drive out to the island is by going through Quincy first. The smaller town has fought the construction plans tooth and nail, dragging Boston into an ongoing court fight.

A Wu administration official told the Herald that the city is "hopeful" that bridge litigation will wrap up soon enough for Boston to begin advertising for the project this fall.

The mayor's office also mentioned the idea of ferry service in lieu of the bridge, and one of the administration's officials recently noted "nothing is off the table" on that front.

But the Walsh administration long objected to that idea, saying it was too expensive and would not work for emergency responses to the island. Acting Mayor Kim Janey, who ran the city for much of 2021 between Walsh's departure and Wu's swearing in, also floated the idea of ferries at one point and ordered up a review, only to quietly drop the idea a few months later, according to the Boston news source.