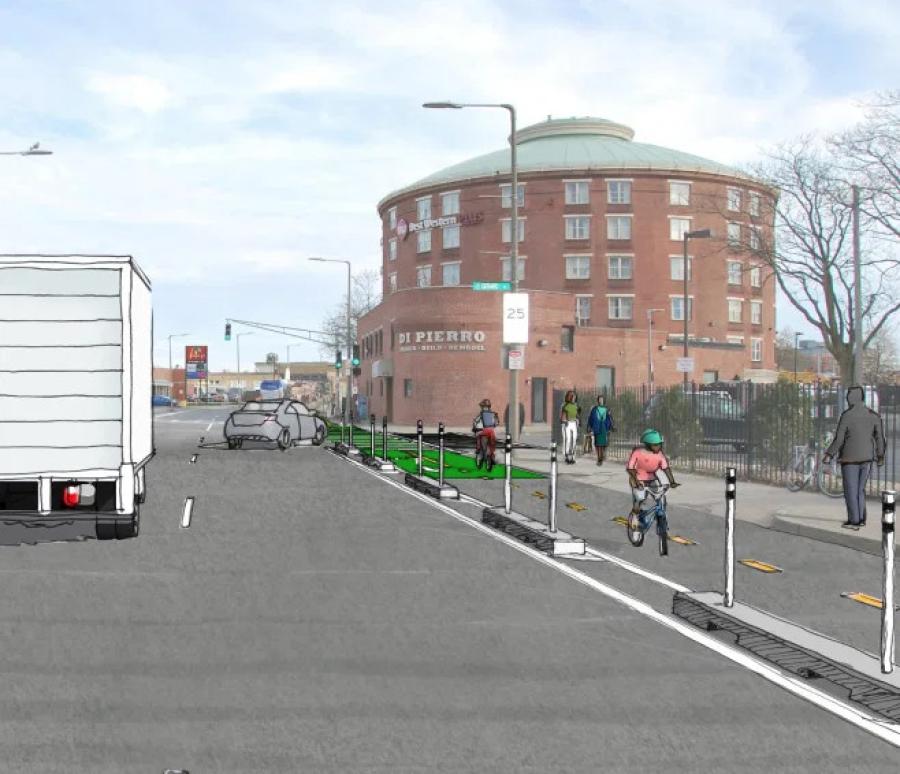 The City of Boston plans to add a two-way protected bikeway on Massachusetts Avenue between Melnea Cass Boulevard and Columbia Road in Dorchester. (City of Boston rendering)

The Boston Transportation Department announced recently that a mile-long, two-way protected bike path along the western edge of Massachusetts Avenue in Dorchester is scheduled to be constructed later in 2021. A specific start date is expected to be disclosed soon.

The bike route will run between Melnea Cass Boulevard and Columbia Road in the Boston neighborhood.

City officials emailed the project's stakeholders in late June, inviting them to review the final design plans for the path, identified as a priority "Better Bike Corridor" in the city's Go Boston 2030 transportation plan, according to StreetsBlog Mass. The email also noted that a contractor has been lined up to perform the work.

The bike path's designs call for a repurpose of the westernmost lane of Massachusetts Avenue, from Melnea Cass to Columbia, into a two-way cycle track — a protected bicycle path, separated from traffic with low concrete barriers — along the western curb of the street.

By consolidating bike traffic along that side of Massachusetts Avenue, where there are fewer driveways, the project's designers noted that the new cycle track will minimize the "severe safety issues" associated with turning cars and large trucks.

In addition, modular concrete curbs will separate the bike lane from parking or general travel lanes along most of the new bikeway's length, with gaps at crosswalks and driveways, StreetsBlog Mass reported.

At the northern end of the project, the two-way cycle track will continue across Melnea Cass to connect with existing flex post-protected bike lanes across Boston Medical Center's campus, giving bike riders a safer route through one of the city's most deadly intersections.

The project also would add median barriers to restrict unsafe motor vehicle turning movements at some intersections, rebuild accessible curb ramps at crosswalks, and build five new "floating" bus stop islands between the new cycle track and the rest of the street.