Bridge Crack Closes I-40 Bridge Over Mississippi River in Memphis 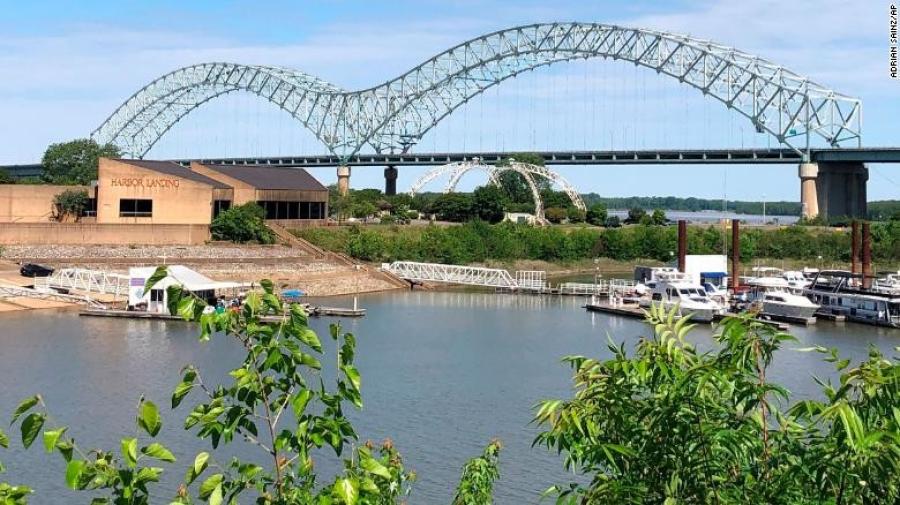 A crack in a steel beam has forced the closure of the Interstate 40 bridge that connects Arkansas and Tennessee.

During a routine inspection of a key interstate bridge over the Mississippi River on May 11, an Arkansas Department of Transportation (ARDOT) engineer spotted a fractured beam on the structure that led him to immediately make an urgent 911 call.

"We need to get people off the bridge immediately," he warned.

The frantic call led to the bridge's immediate shutdown to avert a potential disaster.

The discovery of the crack has prompted what officials from both ARDOT and the Tennessee Department of Transportation (TDOT) described as a meticulous examination of the bridge and its structural integrity, which could take weeks as engineers try to determine whether there is an imminent threat of collapse and if the structure is sound enough for crews to begin repair work.

"This fracture had the potential to become a catastrophic event," Lorie Tudor, the director of the ARDOT, told a reporter from the New York Times.

One of the Nation's Vital Bridges

As one might expect, the 48-year-old Hernando de Soto Bridge is a prominent river span in that it carries car and truck traffic on I-40 across America's longest river from downtown Memphis, Tenn., to rural eastern Arkansas.

The interstate bridge, which opened in 1973 and has two 900-ft. spans, was last inspected in 2019. It is overseen by state transportation officials in both Tennessee, which handles its maintenance, and Arkansas, responsible for inspections, according to the Times.

TDOT noted that the average daily traffic for the bridge is approximately 45,000 vehicles, with about 25 percent of them being trucks.

Memphis' WMC-TV, a CNN affiliate, called the bridge a "vital piece of America's infrastructure for moving traffic and freight around the country."

As a result of the closure, vehicle traffic has been rerouted in both directions to nearby I-55, about 3 mi. south, and across the river over the 72-year-old Memphis-Arkansas Bridge. On the afternoon of May 13, most of the traffic appeared to be tractor trailers moving along at a snail's pace, CNN reported.

The U.S. Coast Guard said Friday, May 14, that river traffic had reopened on the Mississippi River near Memphis, Tenn., three days after it was closed when a crack was discovered.

More than 45 tug boats hauling about 700 barges had been idled along the river south and north of the bridge, waiting for clearance. Now they can cross under the Hernando De Soto Bridge, Petty Officer Carlos Galarza told The Associated Press.

Engineers wanted to ensure the bridge could stand on its own before reopening river traffic.

The bridge's surface will remain closed to vehicles indefinitely, with road traffic rerouted to Interstate 55 and the 71-year-old Memphis & Arkansas Bridge, about 3 miles south.

A Temporary Fix Could Be Weeks Away

"It will be a number of weeks at least until we can have a [temporary] repair in place, probably six to eight weeks minimum," said Paul Degges, TDOT's lead engineer in remarks to CNN on May 13. "Hopefully, we can pull a rabbit out of a hat sooner, but public safety is most important. There are lots of moving parts to look at."

He added that his agency is hopeful that it will develop a strategy in the next few days to create a timeline for the repair. An interim temporary repair to get vehicle traffic back across the bridge will be made while engineers and contractors work to implement a long-term solution, Degges said to the news network.

"We absolutely want to get the bridge open as soon as possible, but we're not going to shoot from the hip here," said Clay Bright, Tennessee's Transportation Commissioner. "We want to have the best fix, long term, to get this bridge back open."

Officials Unsure of the Fracture's Cause

Degges described the crack as "very unusual" to WMT-TV and CNN. He believes the fracture, on the bottom side of the bridge truss, was most likely caused by fatigue or a welding error when the structure was originally constructed. It is unclear how long the crack has been there, but Degges believes it has probably been there for only a couple of weeks. He noted it was not present during a bridge inspection in September 2019.

The Times reported that based on signs of corrosion and the appearance of the metal inside the crack, which darkens from exposure to air, engineers said it was quite likely that the fractures had been there for at least a week.

The damaged bridge beam consists of four separate plates; three had been severed, and the fourth was 20 percent fractured, engineers reported, according to the newspaper.

"The whole bridge needs to be inspected to see if the cracking is widespread," said Adel E. Abdelnaby, a civil engineering professor at the University of Memphis, in speaking with the Times. "We were lucky the bottom plate didn't give away completely."

Tennessee Gov. Bill Lee told WMT-TV and CNN said his state will be partially responsible for the bridge repair, adding, "there is still a lot of information that we need to learn."

That knowledge will be gained through the TDOT conducting forensic analysis to discern the exact cause, Degges assured the TV outlets. The state agency has already hired an engineering firm and a full mathematical analysis is under way to study data and models and discuss potential repair solutions.

"It's fortunate that routine inspection averted a potential disaster, but the state of our crumbling infrastructure is deeply troubling," Representative Steve Cohen, a Democrat from Memphis, said in a statement, adding, "The closure of a major thruway will negatively affect us both here in Memphis and around the country, which depends on us as a national connection hub."

The city, with its perch on the Mississippi River, has long leveraged its geography, establishing itself as a nucleus for river, rail and road transportation.

The double-arched Hernando de Soto Bridge was opened in August 1973 at a cost of $57 million, WMC-TV reported. It has been undergoing seismic retrofitting since 2000, with millions spent securing it to withstand up to a 7.7-magnitude earthquake. The region is susceptible to major tremors, although the last big one occurred over 200 years ago.