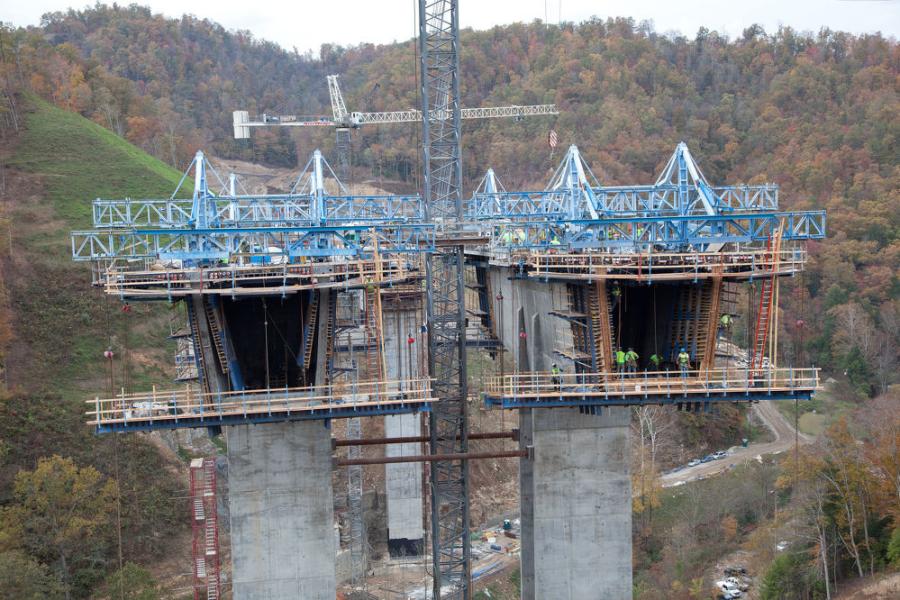 The full length of the Phase I Route 460 Connector project is just under 1 mi. The superstructure of the bridge is a 43-ft.-wide cast-in-place, variable-depth, segmental box, VDOT reported. The depth of the segments varies from 30 ft. at the piers to 12 ft. at the mid-span closures. (Trevor Wrayton, VDOT photo)

Five years after Virginia's tallest twin bridges were completed across challenging terrain, they remain closed to traffic — but that may be changing soon. The Virginia Department of Transportation hopes to open the Route 460 Connector bridge that spans Grassy Creek in Buchanan County, connecting southwest Virginia and eastern Kentucky, sometime in 2020.

New Route 460 in Virginia travels from the Kentucky border near Breaks Interstate Park to the Grundy area of Buchanan County, VDOT said. The route is designated as part of Corridor Q by the Appalachian Regional Commission and is included in the Appalachian Development Highway System. 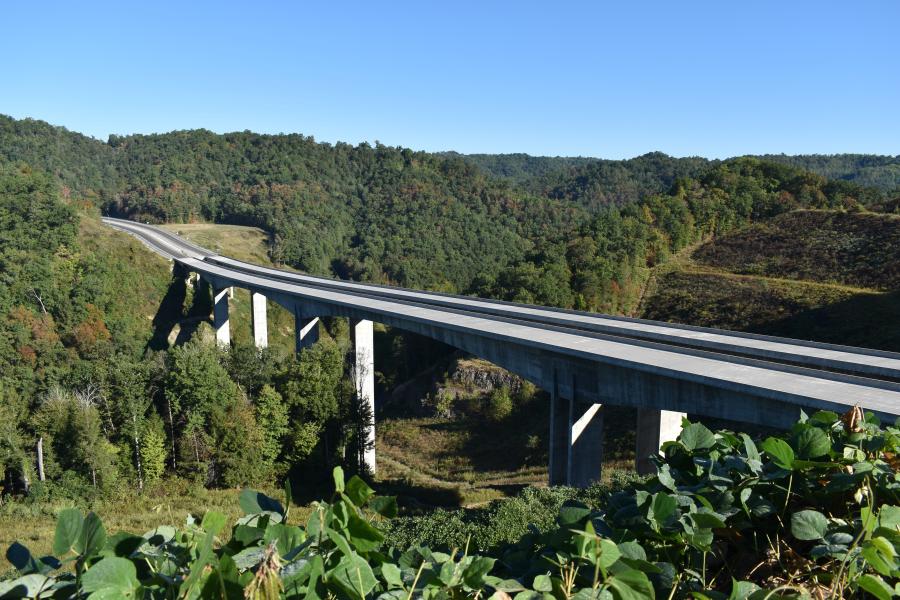 Breaks Interstate Park, which gets its name from the break in the mountains created by the Russell Fork River, contains 4,500 mountainous acres and a 5-mi.-long gorge dubbed the "Grand Canyon of the South." A short distance from the new but unused highway span, the park straddles the Virginia-Kentucky border and is one of the few in the country jointly maintained and operated by two different states. Opened in 1954, the interstate park features hiking trails, overlooks, a lodge, pool and campgrounds. Plans are in place to build another interstate bridge, this one within the confines of the park.

Funding is in place to build a 725-ft. span bridge in the park, which will be the longest swinging pedestrian bridge in North America. A $433,000 grant from the Virginia Coalfield Economic Development Authority will pay for the bridge and other improvements to the park. Construction is set to begin in the fall with a planned opening sometime next year.

Meanwhile, construction of the four-lane vehicular bridges over Grassy Creek was part of Phase I of the Route 460 Connector project. When complete, the highway will extend from the Kentucky state line to connect with the existing U.S. 460 near Grundy. It also will intersect the Coalfields Expressway/U.S. 121, which also is under construction. 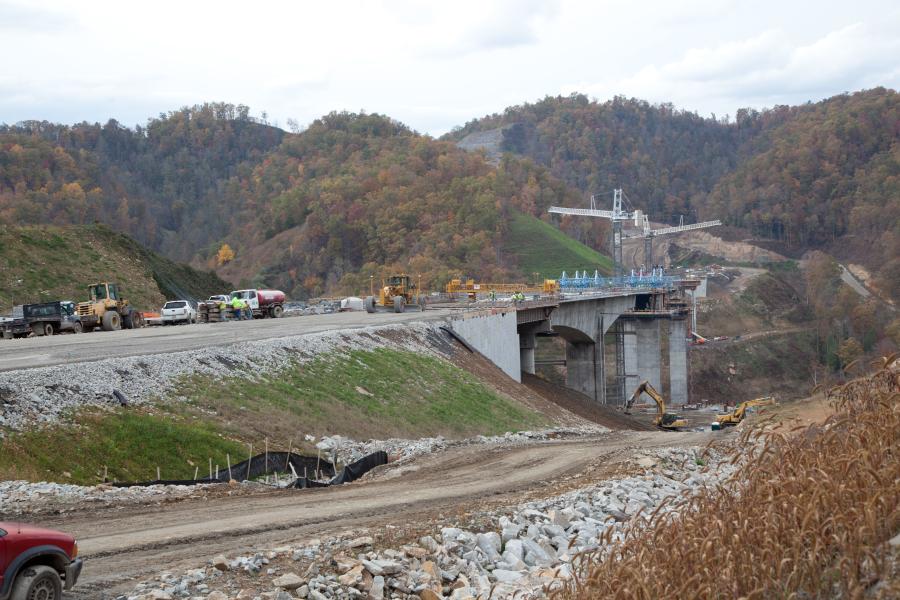 The purpose of the Route 460 Connector project is to create a modern, safe, reliable and efficient highway through the coalfields' region of southwest Virginia in central Appalachia, in the hope of generating economic development and encourage tourism. VDOT promises that the majority of new Route 460 in Virginia will be a two-lane, limited access highway, that will have truck climbing lanes were needed. The Kentucky portion will be a four-lane highway.

Despite being named the No. 1 bridge project of 2013 by Roads and Bridges magazine, the route remains closed because the highway leading up to them — future U.S. Route 460 — hasn't been completed.

Construction of the Route 460 Connector Phase I began Aug. 7, 2009, and was completed June 2015. VDOT said the span across Grassy Creek will open to traffic when Kentucky completes construction on adjacent Route 460 between the bridges and Elk Horn City is completed in 2020.

Located near Breaks Interstate Park, the Grassy Creek bridges are 1,700-ft.-long cast-in-place segmental bridges, each with a deck width of 43 ft. to be able to carry two lanes of traffic in each direction, with a vertical clearance of 250 ft., said a VDOT spokesperson. 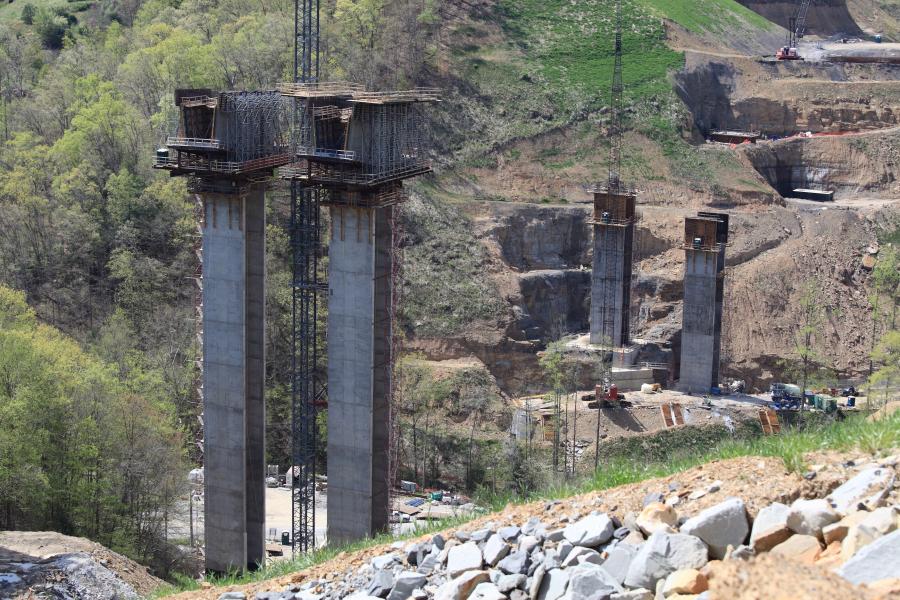 The American Segmental Bridge Institute bestowed its "Award of Excellence" in 2017, noting that "given the challenges, it's amazing such a beautiful, tall, slender structure is the result."

The full length of the Phase I Route 460 Connector project is just under 1 mi. The superstructure of the bridge is a 43-ft.-wide cast-in-place, variable-depth, segmental box, VDOT reported. The depth of the segments varies from 30 ft. at the piers to 12 ft. at the mid-span closures.

The superstructure was constructed using a cast-in-place, segmental, balanced-cantilever method because of the impracticality of hauling precast segments to the site through the surrounding mountains, VDOT said. An on-site concrete batch plant was used for the project, supplying 16,000 cu. yds. of concrete.

Construction methods utilized large equipment to move earth and rock. VDOT said that Route 460 Phase II utilized up to three spreads of equipment at a time, which included Caterpillar 777 and 785 haulers; Cat 992 and 993 loaders; and Cat D10 and D12 dozers. 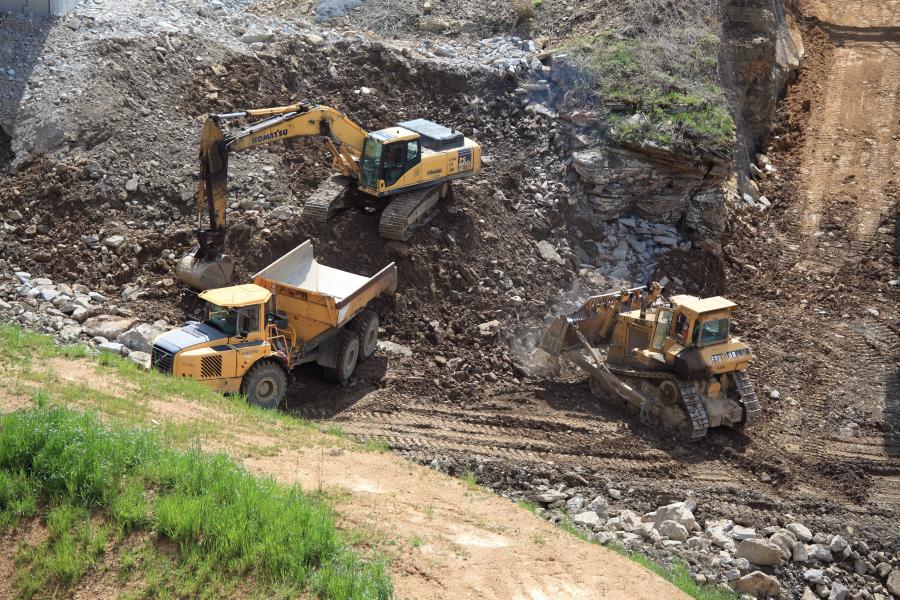 The design-build team for the bridge consisted of a talented team that included prime contractor Bizzack Construction, a Lexington-based contractor known for heavy highway design-build, project management and excavation. Bridge subcontractor CJ Mahan Construction Co. LLC is a heavy-civil and marine contractor from Columbus, Ohio, that takes on some of the most challenging and complex infrastructure projects east of the Mississippi.

The twin spans and a short stretch of highway connected to the southern end cost approximately $120 million. Federal funding for the project dried up before work began on the connecting roads, but construction resumed on less ambitious plans and a budget of $300 million to complete the project. VDOT's revised plans will funnel traffic off the four-lane bridge to two lanes, with climbing lanes where needed.

Following are updates from VDOT for each phase:

Until then, an award-winning, completed bridge is flanked by graded roadbed marked with cones in an attempt to prevent traffic from illegally crossing the 2,000-ft. span over Grassy Creek into Kentucky. CEG