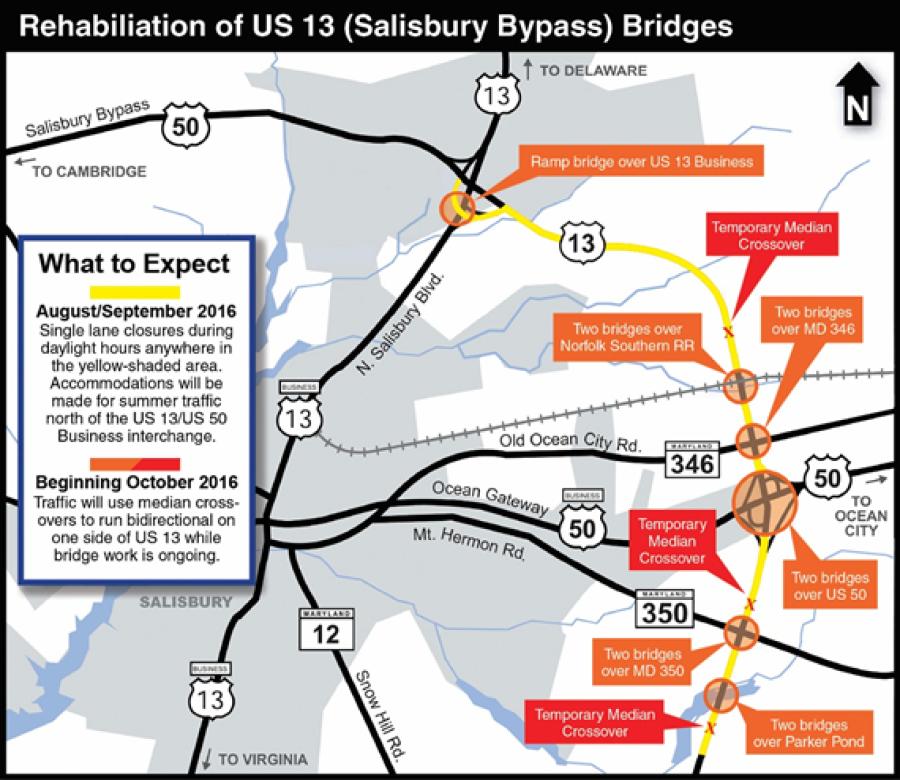 The bridges are at six locations along the northeastern section of the U.S. 50 Bypass between the U.S. 50 Business and U.S. 13 Business interchanges.

The bridges are at six locations along the northeastern section of the U.S. 50 Bypass between the U.S. 50 Business and U.S. 13 Business interchanges:

• One ramp bridge from U.S. 13 Business to the Salisbury Bypass

To help ensure the safety of workers and motorists during structural repairs, SHA will close one side of the bypass and detour traffic around the work area across the median and both directions of traffic will share the roadway. Speeds through the work zone will be reduced from 65 to 55 mph.

Crews will place concrete barrier between the eastbound and westbound traffic to allow bidirectional traffic flow (one lane each direction). When work is completed on one side of the bypass, traffic will be shifted to allow work on the other side. Drivers traveling through the work zone will need to slow down, remain alert and follow the signs.

Motorists should expect single-lane closures during August and September for construction of the median crossovers, with bidirectional traffic beginning mid-fall. All work will be completed by summer 2018.

Work includes steel and concrete repairs and bridge deck (driving surface) patching and resurfacing. This work will extend bridge service life by several decades. Many of these bridges will be painted under a separate contract when the rehabilitation work is completed.

Every day, 36,225 vehicles travel the Bypass and this volume is expected to reach 53,000 by 2035. The bypass is a major beach route with traffic increasing 15 percent during the summer.