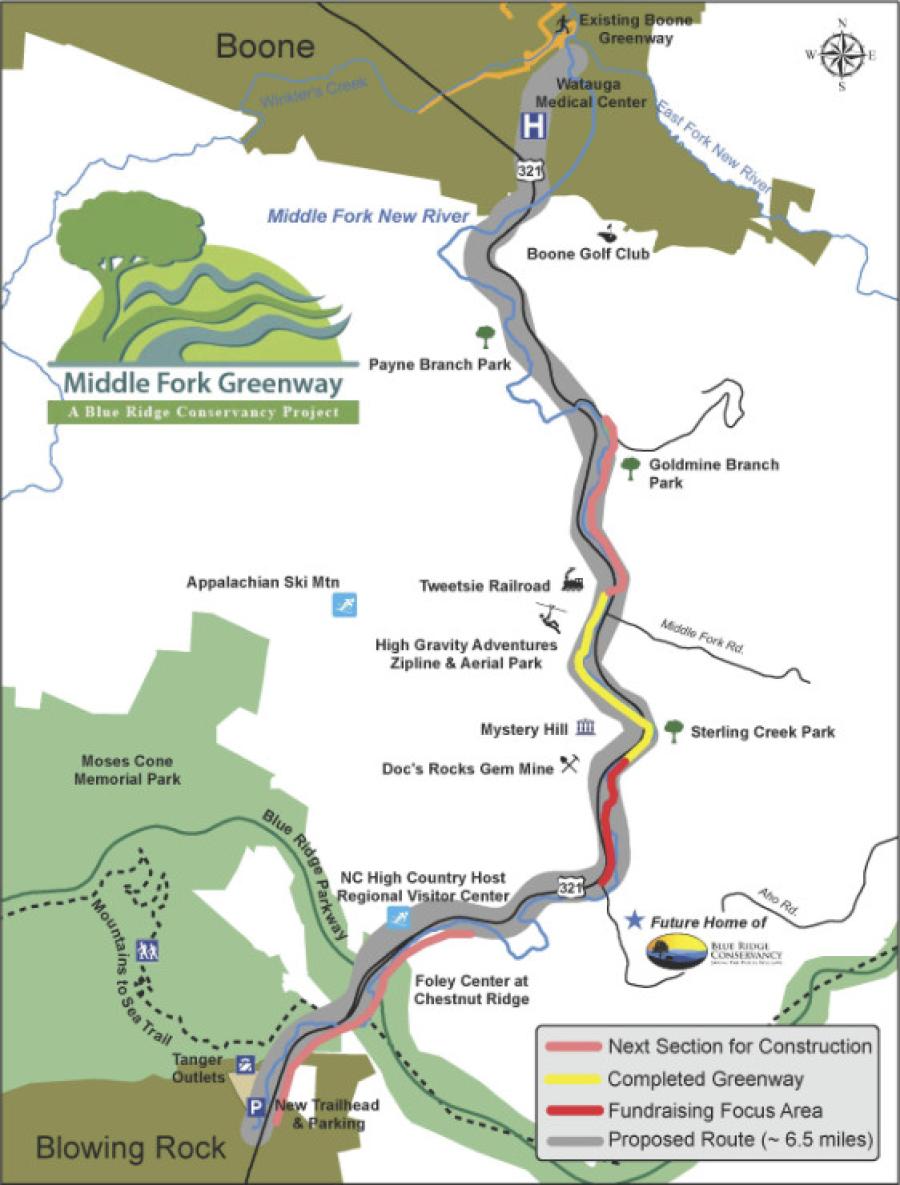 The Middle Fork Greenway is a developing pedestrian and cyclist friendly trail that will connect the scenic mountain towns of Blowing Rock and Boone. (BRC graphic)

In a collaborative community effort, the North Carolina Department of Transportation (NCDOT) and Blue Ridge Conservancy (BRC) will create public access to the future Middle Fork Greenway as part of the bridge replacement project on Aho Road in the Blue Ridge Mountains.

The Middle Fork Greenway is a developing pedestrian and cyclist friendly trail that will connect the scenic mountain towns of Blowing Rock and Boone. It will ultimately create expanded recreational opportunities while promoting physical activity and improving the health of residents and visitors.

In addition, planners said the trail also will support the local economy by connecting users with the many nearby attractions and local businesses.

When complete, the 6.5-mi. Greenway will connect the sidewalks of downtown Blowing Rock to the Boone Greenway, linking the Blue Ridge Parkway, the Mountains-to-Sea Trail, various retail centers, tourist attractions, three pocket parks and other natural areas, as well as the Appalachian Regional Healthcare Medical Center.

"These are complex projects, and it took careful planning to ensure the Middle Fork Greenway could safely travel under the Aho Bridge," said Cullie Tarleton, a NCDOT Division 11 board member.

"NCDOT has been instrumental in Middle Fork Greenway's development," said Charlie Brady, the BRCs executive director. "We are working closely with our division engineers on every section throughout the Greenway corridor."

As the Aho Bridge is replaced to satisfy vehicular traffic, accommodations to incorporate the Middle Fork Greenway under the bridge and a sidewalk connection to safely cross the top of the bridge are a milestone for this section of trail.

The Greenway will connect to FaithBridge United Methodist Church and its 10-acre wetland, protected by a conservation easement with BRC. The church also will grant public access to additional trails to the wetland as the Greenway develops in this section.

"Additional funding was needed to supplement the increased costs for the bridge," explained Joe Furman, Watauga County's planning and inspections director. "That is where some creative partnerships played a key role, through funding from the Watauga County Tourism Development Authority [TDA] and grants from the State of North Carolina."

State Sen. Deanna Ballard secured funding to support the NCDOT in constructing the bridge taller and wider than was originally planned in order to accommodate the Greenway.

The Conservancy is a local, nonprofit land trust dedicated to conserving natural resources in northwest North Carolina. Since its inception, it has conserved more than 21,000 acres in seven counties across the area.

Besides spearheading the Middle Fork Greenway, the BRC's efforts have resulted in the protection of scenic vistas, working farmland, rare and threatened ecological habitats and clean water resources. It also has assisted the Blue Ridge Parkway, Grandfather Mountain State Park and Elk Knob State Park in expanding their borders.