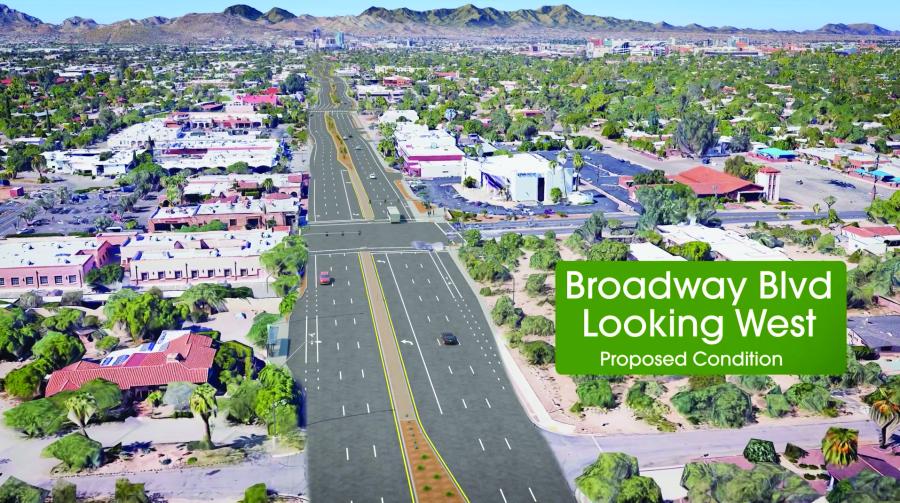 The project will serve as a “gateway to downtown Tuscon and a major link to the Barraza-Aviation Parkway, Downtown Links and Interstate 10.” (TDOT photo)

Construction crews are set to begin a 20-month-long widening project on East Broadway from Euclid Avenue and Country Club Road.

A groundbreaking ceremony for the Broadway Road Improvement Project took place, and now crews will work on widening a 2-mi. stretch to six lanes, improve storm damage, landscape medians, bike lanes and bus pullouts. Bike lanes will be widened from 3 ft. to 5 ft.

The project — which costs almost $72 million — will serve as a "gateway to downtown Tucson and a major link to the Barraza-Aviation Parkway, Downtown Links and Interstate 10," according to the Tucson Department of Transportation.

TDOT selected Ashton Contractors and Engineers to complete the project.

Crews will be working between Fremont and Highland avenues and Warren and Campbell avenues to widen Broadway for approximately six months. This will free up space to work on Broadway's north side during Phase 2.

Crews will install an improved storm-drain system from Campbell to Country Club; Crews will start at the northeast corner of Euclid Avenue and work to the east along Broadway.

This phase will require deep excavation and is expected to take about 10 months to complete.

Crews will begin work on the south side of Broadway, a six-to-eight-month time frame, once the drainage improvements are done.

The final phases of the project include installing medians for turning vehicles, landscaping and public art. The timeframe for this work is about four months.