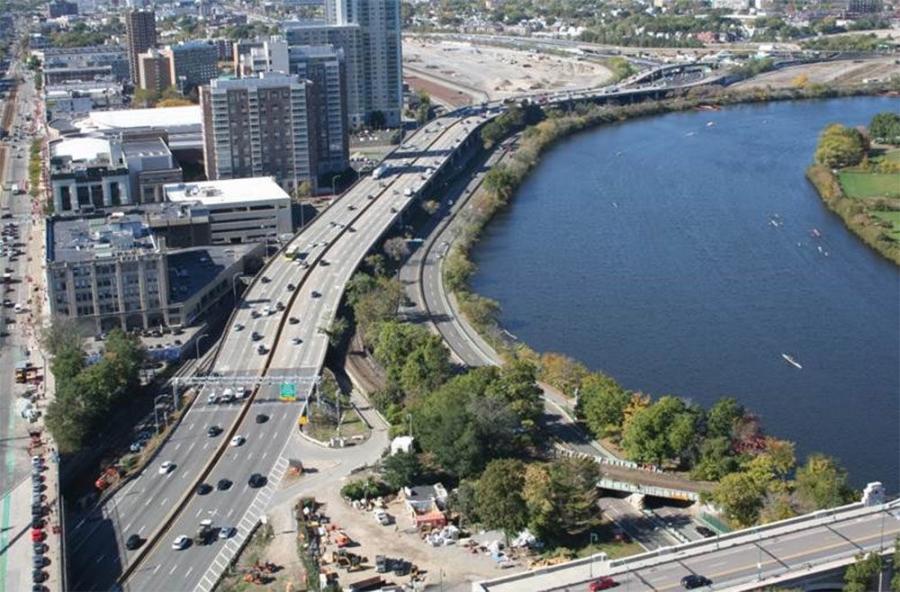 This section of Allston will be transformed during the course of the Allston Multimodal Project, which transportation officials say will take eight years to complete. (MassDOT photo)

Hoping to break a stalemate over the $1 billion Massachusetts Turnpike project, Boston University is offering up more of its own land for the state to fit the giant project through a constricted section of Allston.

Even at only a few feet wide, additional land could help the state rebuild the highway and adjacent Soldiers Field Road without erecting a new viaduct or extending over the Charles River, two options that have generated so much opposition that state officials were forced back to the drawing board this year.

"In an area where feet, and perhaps inches, may be the difference between a workable and an unworkable solution, Boston University is committed to doing the utmost to accommodate these infrastructure improvements," BU President Robert Brown said in a letter to Massachusetts Department of Transportation (MassDOT) Secretary Stephanie Pollack.

BU hopes the land from its campus would provide enough room to move construction work in-land from the river while also squeezing all the eight-lane turnpike, four-lane Soldiers Field Road, two adjacent rail lines and a riverfront recreational path at grade level, a version backed by many advocates involved in the planning and the administration of Boston Mayor Martin J. Walsh.

Brown did not say how much property the school could turn over and noted that encroachments must "not limit our ability to use and operate the buildings" on the campus. But BU spokesperson Rachel Lapal noted the state was already planning to take a strip of land 7 ft. wide, and school officials have previously told the state it could have more. The business-backed nonprofit A Better City, which has championed the idea of putting everything at-grade, said as much as 12 ft. of land in the area may be available without affecting BU facilities.

The tight area behind the BU campus, nicknamed "the Throat", has been the focus of years of debate, as officials and activists have toggled between several options to get all the infrastructure to fit. One option would replace the turnpike viaduct with a newer one; another would bring the highway to grade level but raise Soldiers Field Road on a new, smaller viaduct.

Many advocates instead have long favored putting everything at grade to eliminate hulking roadways and ease direct access to the riverfront for pedestrians and cyclists. Massachusetts officials have warned this approach would be difficult to get permitted because it may require building into or over the river.

However, the state itself has already given some ground, recently saying it will now consider a design pushed by the city of Boston and A Better City to squeeze everything at grade by shrinking the width of shoulder lanes from an earlier version proposed by the state, while adding plant life to the riverfront and a boardwalk to carry the bike path.

Rick Dimino, president of A Better City, said the state's concession is "a major victory."

"I believe now the Commonwealth is poised to build a truly transformative project," he said. "This could be Gov. Baker's infrastructure legacy."

But this is hardly the last word, as the state continues to study other designs, including those that put the highway or Soldiers Field Road on a viaduct.

"That doesn't really change the next step in the process, which is we still have to compare the now-improved version of the all at-grade to" the other design ideas, Pollack said in an interview with the Globe Oct. 6.

Pollack is expected to announce a preferred option for the $1 billion-plus project in November, though the evaluation of other options is expected to continue even beyond that.

Emily Norton, executive director of the Charles River Watershed Association, said her organization will continue to oppose elements that negatively affect the Charles. Even the version backed by A Better City and Boston requires too much construction in the river, such as boardwalk pilings, she said.

Dimino said BU's offer of more land could further help avoid impacts to the river, as would narrowing the lanes on Soldiers Field Road. City officials also have argued the at-grade option would reduce long-term costs because it would require less maintenance than a viaduct. Earlier this year, Harvard University also called for the state to consider the all-at-grade design pitched by the city, arguing a consensus must emerge. The school is another major stakeholder in the project, though mostly more to the west, where plans to straighten the highway where it loops toward Brighton would open space for new development by the school.