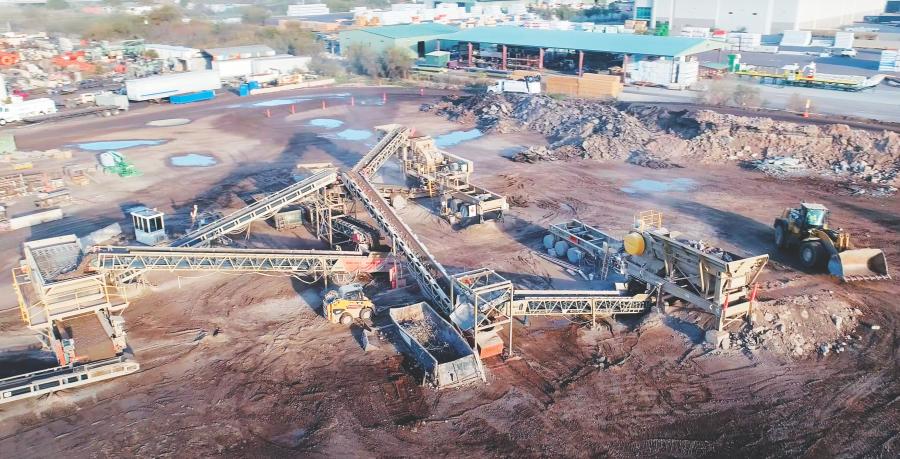 Buesing Corporation’s recycling division recently completed the installation of a new aggregate plant at its Chandler, Ariz., site. Replacing a diesel hydraulic driven plant, the new all electric configuration has doubled its production capabilities without increasing the yard’s footprint.

Amid the Sonoran Desert, a plant is growing.

The general civil construction contractor is well known for its work on high profile jobs in the Phoenix area, but it has steadily built a significant recycling division that produces aggregate for its own projects while also marketing to the general construction industry. And they may be just getting started. 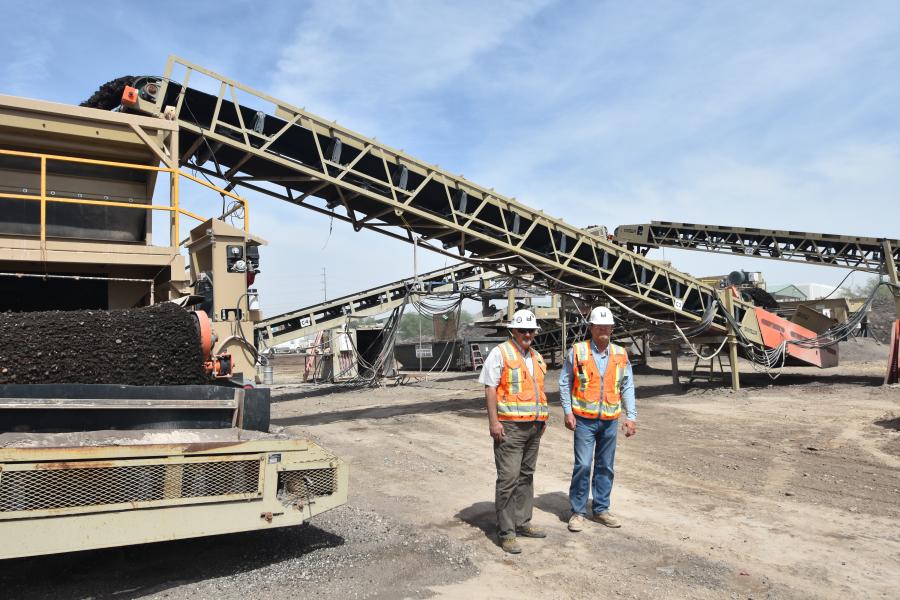 Working with the Materials Solutions division of Astec and its dealer, Goodfellow Corporation, Buesing replaced its existing hydraulic diesel-driven plant with a total electric plant, which went operational in June 2021, according to Kevin Somerville, vice president and general manager of recycling of Buesing Corp.

"We were on our third crushing plant," Somerville said of his company's facility on the east side of the Phoenix metro area. "For the last eight or nine years, we had set up a plant utilizing small portable equipment. We did fine with that, but our TPH [tons per hour] capability was limited. We'd crush here, then move the entire plant to a job site and then move back. To increase production, we needed to put together a system we could have for 15 years and was far more robust, more durable than what we had."

"We reached out to Goodfellow to help design a new plant, knowing that they would be a good partner for us," Somerville said. "We knew that the Astec equipment [formerly KPI-JCI] would be high quality, durable equipment."

The new plant would need to address several goals.

"Reducing downtime was a major consideration in designing the new plant," said Ed Triplett, crushing superintendent of Buesing. "We wanted to stay away from downtime issues associated with a hydraulic diesel-driven plant. We were experiencing frequent, expensive repairs to the existing plant." 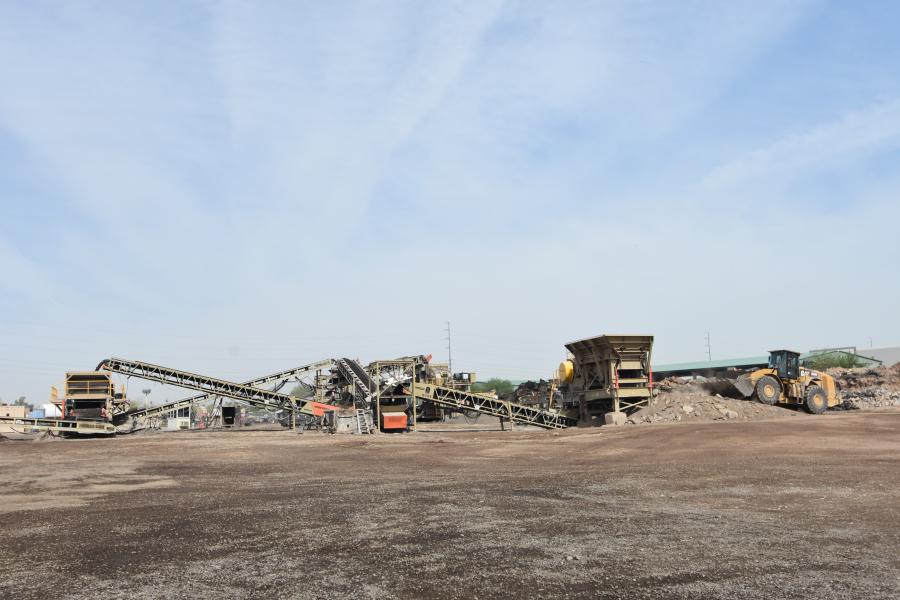 Increased production was, of course, also an important consideration. The existing plant could crush up to 300 tons of concrete per hour, according to Triplett, and that was not enough.

"We needed to crush more, and we also wanted a larger capacity screening unit with better throughput," he said.

While increased production was essential, there were limitations on the physical size of the new plant due to the overall footprint of the site — just 7.7 acres. Space would be at a premium.

Finally, in terms of a supplier, Somerville said, "we wanted local parts, local service and local support. This would be a healthy investment north of $2 million."

Buesing knew that some customization would be required to meet its needs and an equipment vendor with engineering and fabrication capabilities was a must, he added.

After identifying Goodfellow and Astec as the preferred partners for the project, the process of designing, manufacturing and installing the plant begin during the summer of 2020.

Mike Caldwell, Goodfellow's representative assigned to Buesing, assembled a team that included Bill A.Royce, Astec's Materials Solutions regional sales manager, and engineers from both Goodfellow and Astec. The team worked closely with Somerville and Triplett throughout the process to assess Buesing's needs, identify solutions and produce the final product.

In May 2021, Buesing took delivery of two crushers that could work in tandem or individually, depending on the incoming materials and the desired end product.

The primary crusher would be the Astec CS3055 jaw crusher, featuring the Vanguard jaw and an industry leading 1 ½-in. stroke which can crush up to 36-in. material down to 4-to-6 in. From there, material would be fed to another Astec unit — this time their CS5260 horizontal impact crusher, featuring the Maximum Performance Rotor (MPR) featuring the only solid steel rotor in the industry with 2, 3 and 4 BAR configurations. The 5260 would bring the end product down to 1 ¼-in. minus. Finally, the material would be fed to an Astec 8x20 triple deck screen. The CS3055 and CS5260 were built in Yankton, S.D. and the 8203-38LP screener was built in Eugene, Ore.

"Both of these crushers are stand-alone primaries," said Astec Materials Solutions Regional Sales Manager Bill A. Royce. "During the plant design and engineering process, we listened to their challenges and came up with the two primary system to increase production and lower wear costs with a jaw and impactor working in tandem. We further designed the plant to have two separate feed points for the inbound material streams of RCA/RAP. The two separate feed points gives them flexibility for maintenance when the jaw needs to be down, they can still run the impactor and build their RAP stockpiles."

"This system has doubled our TBD at this site," Somerville said. "We actually need to grow our inbound material now to get up to full production. We currently crush three days a week, so we have plenty of room to grow."

On an hourly basis, Somerville and Triplett said they can now crush 450 tons of concrete and approximately 600 tons per hour when crushing asphalt.

The right equipment is essential, but both Goodfellow and Astec credited the Buesing team with their discipline of sorting and preprocessing the inbound material streams.

"They have RAP coming in," Royce said. "They have concrete coming in. They have a man and a machine [excavator with a pulverizer] prepping materials right at intake. That pre-processing just makes the crushing and screening process run more smoothly."

Caldwell added, "Triplett and his guys have done an amazing job."

Getting Up to Speed

"It's easy to build a plant on paper, but when you start crushing, it is reality and there is always further customization that is needed," Somerville said of the start-up period.

"Goodfellow was very responsive during setup," Triplett said. "When issues arose, they would get with Astec and, between the two, it was taken care of. They were very responsive, even to unanticipated design changes that we asked for."

Custom fabrication is something Goodfellow both prides itself on and specializes in. 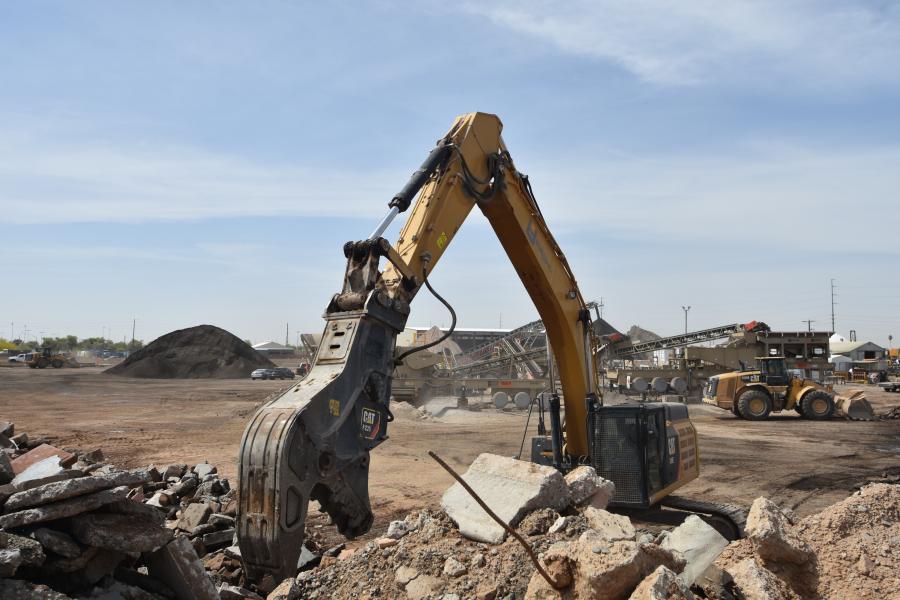 "We are sort of a hybrid between an equipment distributor and a manufacturer," Caldwell said of his company. "We can start with Astec machines and get very creative with the final product. Additionally, whatever we build here locally limits freight exposure for our customers."

By October, the plant was operating at 90 percent of full capacity and Somerville said that's where they wanted to be.

"Ninety percent is on the safe, conservative side," he said. "At 100 percent, you can start to get some hang-ups."

He added that they can typically run for 7.4 hours of an 8-hour day, shutting down just long enough for routine lubrication.

Somerville said that Triplett and his team do 98 percent of the necessary maintenance.

"There are 28 motors on the system and over one mile of cable, not to mention a dust suppression system at every transfer point as well as inside the crusher," he said. "So, maintenance is a must, but mostly routine."

Public works construction projects in the Phoenix area, including aggregate specifications, are regulated by the Maricopa Association of Governments. Buesing currently is producing three different blends of concrete and asphalt that meet MAG standards, depending on the end use, from 100 percent crushed asphalt used on lay down yards and access roadways to an asphalt-concrete blend for roadways.

On the incoming side of things, Somerville said his plant is a great alternative to landfills for contractors needing to dispose of construction waste.

"We are much more competitive than a traditional landfill," he said. "Contractors who in the past were paying by the ton to drop at a landfill can now bring debris here for less — and oh by the way, it's a recycling yard and they can and should feel good about that."

Buesing began recycling construction materials back in 1996 — before it was commonplace for contractors to do their own crushing and screening — on a small site in downtown Phoenix. By 1999, the company had outgrown that space and relocated the operation to its current Chandler location. Founder Jerry Buesing saw the potential savings in transportation costs that could be realized by processing materials on the jobsite as well as at his own central processing plant.

Over the years, the Chandler site increased production to the point of being able to market its product to local municipalities and other contractors in Arizona.

Now, after making the investment to maximize production in Chandler, the company is "actively looking for a site for a second recycling plant," according to Somerville.

"If we increase the volume of raw materials coming in, then we can increase the output with this new plant. Our goal at Buesing's recycling division is to grow quantity and revenue, and then find other sites where we can expand."

In other words, don't be surprised to see more plants growing in the Valley of the Sun.

The company was founded in 1965 in Minnesota by Jerry Buesing who later relocated the company to Arizona.

Goodfellow Corporation is a certified distributor for Astec Materials Solutions and Astec Construction Machinery Solutions – Roadtec. Its more than 50 years of experience in the aggregate industry gives it the experience to create a custom plan for each unique situation.

In addition, the company manufactures its own line of support equipment and service everything it sells in house. Their promise is, "If your plant goes down, we can get you back running fast." CEG