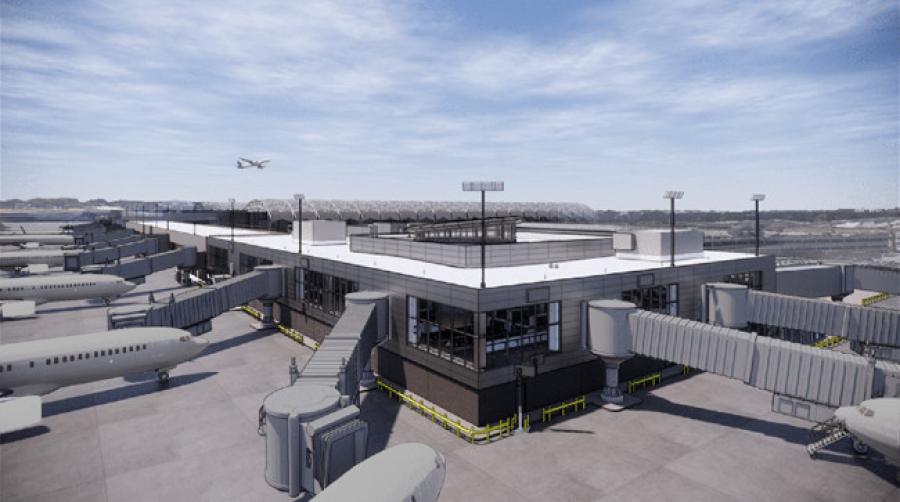 Building crews continue to work on a project to expand the North Terminal at Atlanta's Hartsfield-Jackson International Airport. By the end of 2023, what is now a dusty, noisy construction site will be an expanded terminal featuring five new gates.

And with more than $600 million included for Georgia airports in the federal infrastructure bill, construction at the airport is likely to become commonplace.

Balram Bheodari, the general manager at the Atlanta airport, recently told WABE-FM that Georgia's share of the money will be used not only for upgrading the airport, but further expanding it as well.

As he spoke at the construction site, he also noted that projects currently are under way to widen Concourse D, modernize Concourse C and expand Concourse T. Work also is ongoing to upgrade parking and cargo areas.

Flanked by dozens of workers in hard hats, Bheodari and Georgia U.S. Sen. Jon Ossoff toured the North Terminal construction in late August before addressing the media. Ossoff said federal spending on airport upgrades will mean more construction jobs, and the ability to move even more goods in and out of the state. He cited the Atlanta airport and the Port of Savannah as being among "the premier logistics hubs" in the United States and the world.

The $1.2 trillion bipartisan infrastructure bill passed the U.S Senate on Sept. 9, while the U.S. House is moving closer to giving it the green light.

"This was Democrats and Republicans under President Biden's leadership coming together to get something done for the country, bigger than political party," Ossoff said in his remarks to the Atlanta radio station.

Without waiting on funds from the infrastructure bill, one of the projects already under way at the Atlanta airport is a $124.5 million plan to add five additional passenger gates to Concourse T, which encompassed 17 gates prior to the work.

The building effort is a joint venture of Skanska, Atlanta's New South Construction, FS360 in Sandy Springs, Ga., and Synergy Construction Inc., based in Chicago. The JV has been working since late last year on the project, located at the north end of Concourse T.

In addition, the contractors and engineers are rebuilding a major portion of the North Terminal exit road, constructing a Delta Airlines ground support equipment facility and a fire station, and overseeing relocations to the utilities' infrastructure.

The effort is just a part of ATLNext, a much larger expansion and renovation plan at Atlanta Hartsfield-Jackson designed to increase capacity, renew and replace existing facilities, and enhance the airport's aesthetics.

"We are proud to support the effort to help secure Hartsfield-Jackson's position as the busiest and most efficient airport in the world," Scott Cannon, executive vice-president of Skanska's building operations in Georgia and South Carolina, said in a statement. "The Concourse T North Extension and renovation effort will enhance the level of customer service, while meeting passengers' changing needs."

Crews began site preparation, which included demolishing and relocating older infrastructure to make way for the expansion, prior to the new concourse's groundbreaking last January. The joint venture expects to complete the airport project in December 2022.