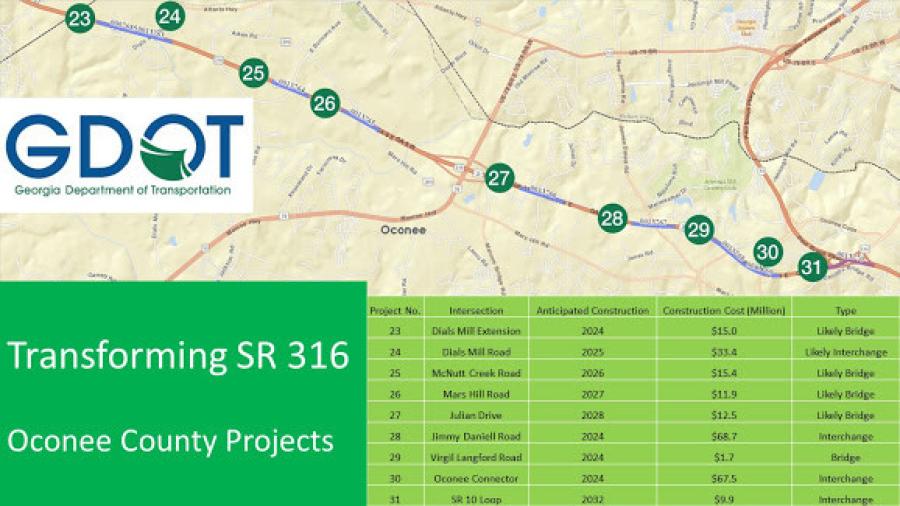 Construction is scheduled to begin in 2024 on four of nine intersection projects in Oconee County, Georgia, that are part of a massive effort to transform Georgia State Road 316 into what the Georgia Department of Transportation (GDOT) is calling "a freeway-style corridor."

Oconee County Board of Commissioners Chair John Daniell said he received notice of the preliminary schedule for the nine Oconee County intersection projects in December.

Included in the initial construction is a "bundle" of projects that will include multi-grade intersections at the Oconee Connector and GA 316, and at Jimmy Daniell Road and GA 316. The bundle also includes a bridge supporting Virgil Langford Road, currently blocked, across GA 316.

Construction also is scheduled for 2024 for what now appears likely to be a bridge over GA 316 at Dials Mill Extension in the far west of the county.

Documents assembled on a special page on the GDOT website for GA 316 show a total of 31 projects across three counties, beginning at GA 20 in Gwinnett County, just to the northeast of the metro Atlanta area, and continuing east through Barrow County before ending at the intersection with the GA 10 Loop, southeast of Athens in Oconee County.

Nine other GA 316 roadway upgrade projects are in Gwinnett County, and 13 are in Barrow County.

Design work for all the Oconee County projects is incomplete, but the current total cost estimate for the nine enterprises is $262 million, with construction start dates running through 2032.

The GDOT's reconstruction efforts along GA 316 is based on a need to improve the state road to handle its current and future traffic congestion and reduce historic crash rates along the corridor. Once completed, the changes will upgrade sections of SR 316 to a freeway-style corridor, improve traffic flow conditions and lower the number and severity of accidents.

The documents recently released by GDOT promoting the changes to GA 316 designate the actual character of four of the nine intersections upgrades.

Jody Woodall, director of Oconee County Public Works, said that he understood there would be some savings by bundling the first three interchanges listed.

Four of Final Five Likely to Be Bridges

The type of intersections is not marked for any of the five remaining Oconee County projects on the GDOT list.

Woodall said the costs listed suggest that enough money is being designated for an interchange only at GA 316 and Dials Mill Road. The other four could be bridges, given the figures provided by the GDOT, he said.

Several of the projects in Gwinnett and Barrow counties already are under construction.