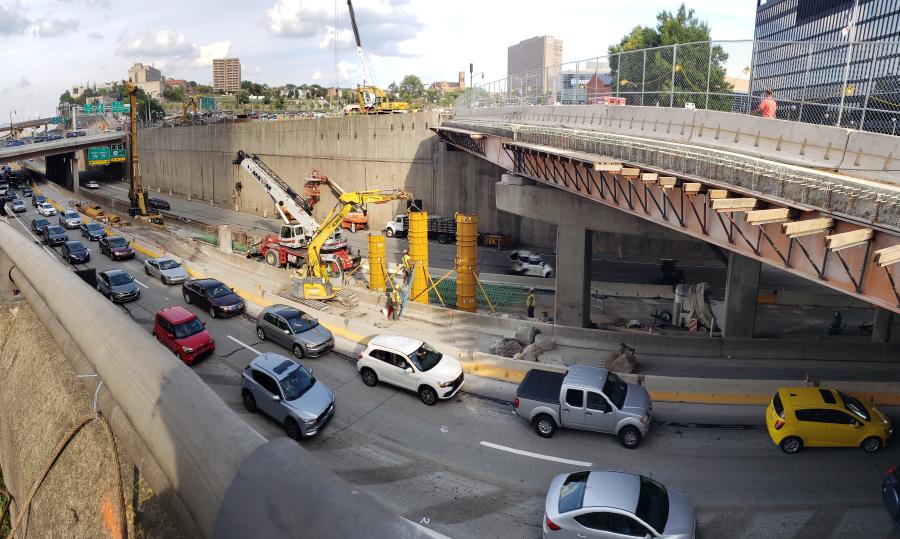 The $29.34 million project will consist of the construction of a structure spanning I-579 to link downtown Pittsburgh and the Hill District.

A unique bridge/city park project is currently under way in downtown Pittsburgh, Pa.

The Pennsylvania Department of Transportation (PennDOT) is managing the construction of the "Cap" Project — the I-579 Urban Connector — for the Sports & Exhibition Authority (SEA). The city of Pittsburgh holds the construction contract, and the SEA is coordinating with the city on the administration.

The $29.34 million project will consist of the construction of a structure spanning I-579 to link downtown Pittsburgh and the Hill District. In part, the Cap project will create a new three-acre greenspace, which will include pedestrian pathways, bicycle routes, rain gardens for stormwater management and design elements from neighborhood artists. 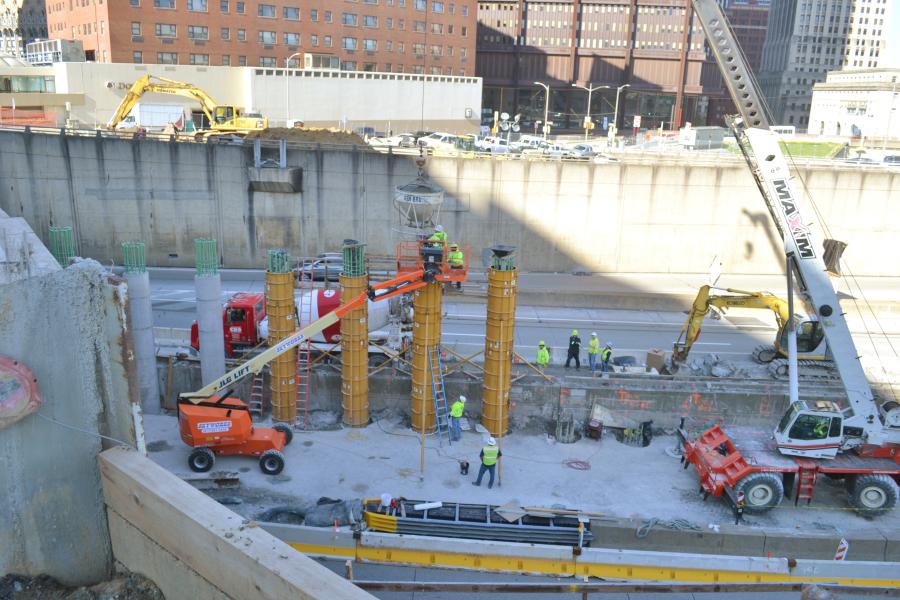 The bridge structure will account for approximately 1.2 acres of the approximately three-acre park. In addition, the work will encompass reconstruction of the existing pedestrian walkway within an existing triangular park bounded by Seventh Avenue, Bigelow Boulevard and Webster Avenue.

This area will be reconstructed to eliminate an existing pedestrian underpass below Webster Avenue and bring the pedestrian walkways into compliance with ADA requirements.

The prime contractor is Fay, an i+iconUSA Company. According to Doug Thompson, principal assistant construction engineer of PennDOT District 11, the full dollar amount of the project is $29,349,389.28. Notice to proceed was given on June 24, 2019, and the current completion date is Nov. 2, 2021. The project is currently on schedule. 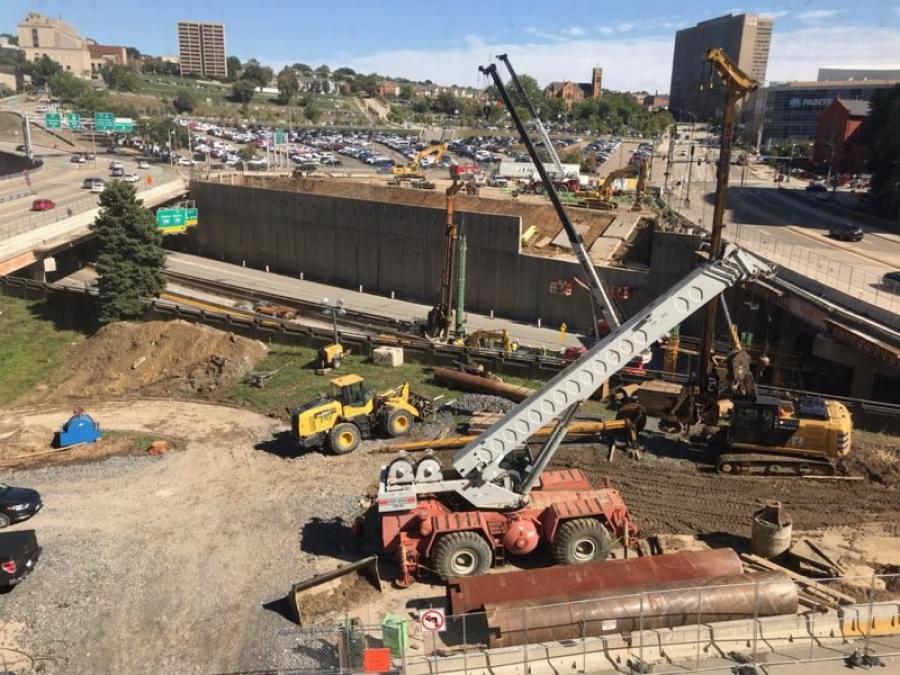 "We're building a bridge structure over our PennDOT I-579 Expressway, and the bridge structure is unique in the fact that it's not going to support a highway, as we usually build these structures for," Thompson said. "It will be a city park over top of the highway."

Jason Zang, PennDOT's assistant district executive of construction, noted that the area is very tight, with existing retaining walls on both sides of the highway.

"There are micropiles going in behind this thing, retaining walls and new piers," he said. "Concrete caisson circular-type columns with piers going into the interstate to support this new structure."

Thompson explained that the piers are being constructed right in the center of the highway with active travel lanes on either side. So about eight feet away, traffic is traveling at 60 to 70 miles per hour since it's a high-speed roadway.

"One of the biggest challenges of urban projects like the I-579 Cap Urban Connector project is the limited amount of work area available for both staging and utilizing equipment," said Tyson Hicks, operations director. "With limited workspace, it is essential to select equipment that is capable of performing multiple activities so that it reduces the amount of times equipment has to be moved in and out of the same work area. It is also important to establish the optimal location for each piece of equipment and then communicate the plan with all crews and subcontractors on a consistent basis to have the most efficient usage."

During different times of the day, some rolling short-term closures are required to swing rebar cages in place for safety purposes. 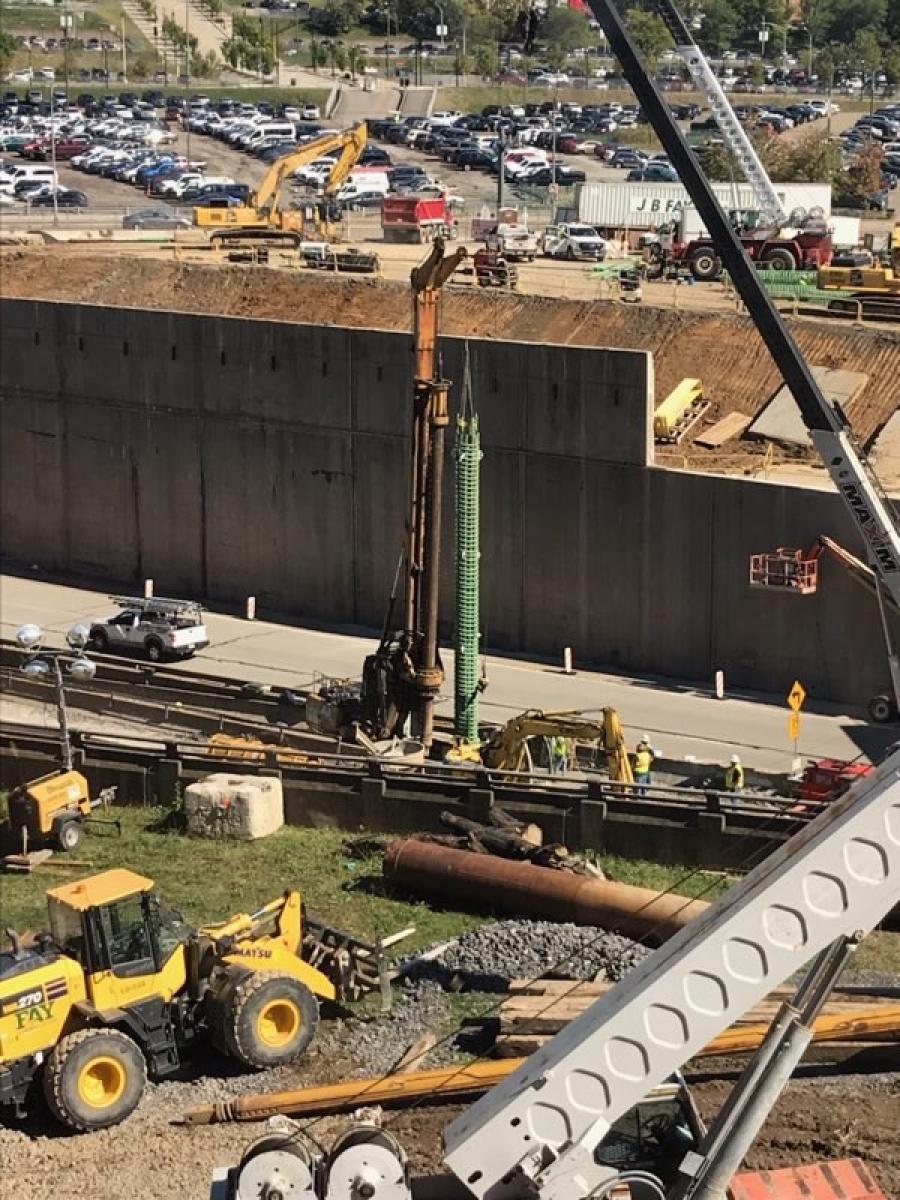 "But due to the traffic volumes, we can only restrict the roadway for certain times," Zang said. We're allowed to do off-peak lane restrictions between 9 a.m. and 3 p.m. "There's a limited amount of total closures to the interstate that will happen at nights and on weekends and there's only a certain number that they're allowed to use just to set beams and things of that nature. So, the challenge is really just working around this heavily used interstate. Other than that, I would say it's rather conventional construction methods — caissons, micropiles, concrete beams."

Thompson noted that some challenges arise just from working in a city environment.

"We're in downtown Pittsburgh," he said. "There are some unknowns of what we're going to encounter, especially for foundation work, because other structures have been in the area —buildings and whatnot, so there's some of that unknown, but most of that's been proving to be a non-issue so far, which is good because there's a design team effort done in advance to locate prior conflicts and everything."

He noted that every time they dig, they find something like old foundations or utilities.

"But most of the time it's abandoned utilities or abandoned parts of the old structure that were in there and proving not to be that big of a deal," he said. 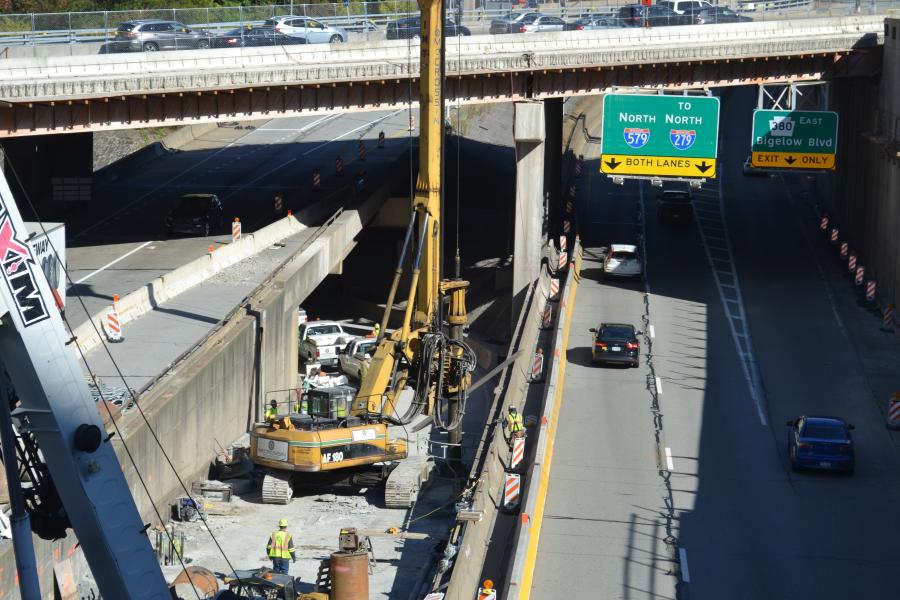 Zang reported that another challenge is the coordination between many other active projects that are going on in the vicinity.

"We've got multiple paving projects, bridge rehabilitation projects, both state and local projects, Allegheny County owned, city of Pittsburgh projects," he said. "We've got three major sports teams in this area — the Steelers, the Penguins, the Pirates. We've got the PPG Arena — basically we're working in their front yard — which is the Penguins and then there's concerts in there and all kinds of events. We're working around parades, we're working around races, 5K and 10K races, marathons. We're in the middle of the heart of the city and we're going to be getting into the holiday season here. The challenge is working around all these things and coordinating different detours with other projects."

The foundation work is expected to extend into the winter.

Currently on the project, Fay, an i+iconUSA Company is using a Komatsu PC 450LC excavator for demolition of the existing retaining walls and to create access for micropile equipment to start subgrade work on the southern abutment. Verification testing for micropiles is being conducted by another subcontractor, Amelie, in preparation for three rows of a total of 243 micropiles to support the bridge footers.

Adjacent to I-579 traffic, a Link-Belt 8050 RT crane is being used to hoist a Garbro bucket to place concrete in columns for Pier 1. Concurrently, subgrade caissons are being poured utilizing the same crane. A JLG 460SJ lift is used to allow access to the top for workers who are pouring and vibrating the concrete to fill the column forms. Further down, a subcontractor, McCrossin, is drilling the caissons for Pier 3 using an AF180 drilling rig.

On the opposite abutment, a Komatsu PC350 excavator is being utilized to install temporary shoring in order to build the abutment footers. There is only a narrow space to perform the work to build what is basically a large bridge that will be used for a park and a walking crossover from the Hill District to downtown Pittsburgh. 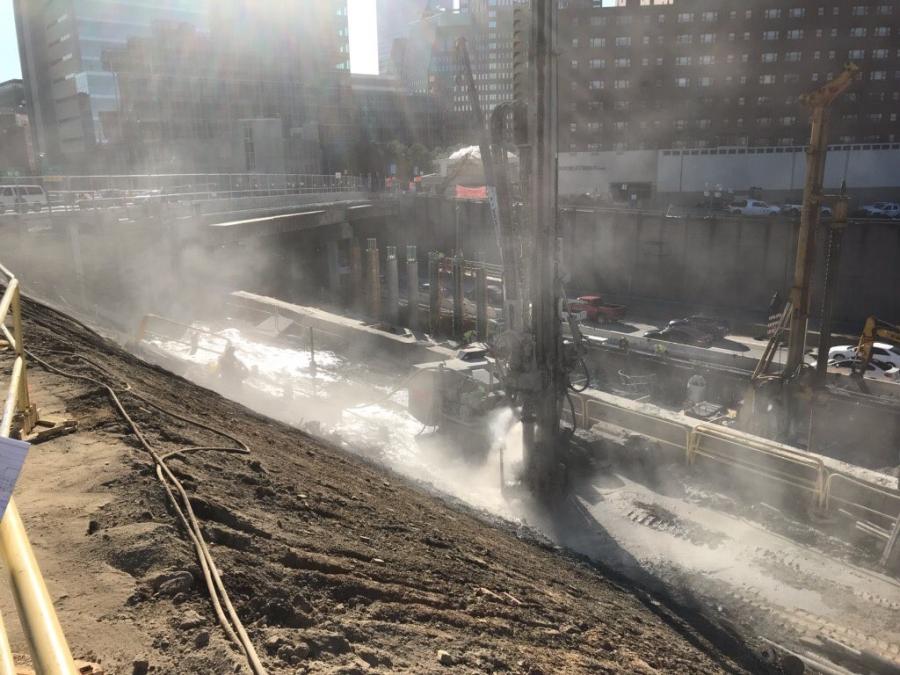 The Sports & Exhibition Authority (SEA) is governed by a seven-member board of directors appointed by both the County of Allegheny and the city of Pittsburgh. CEG