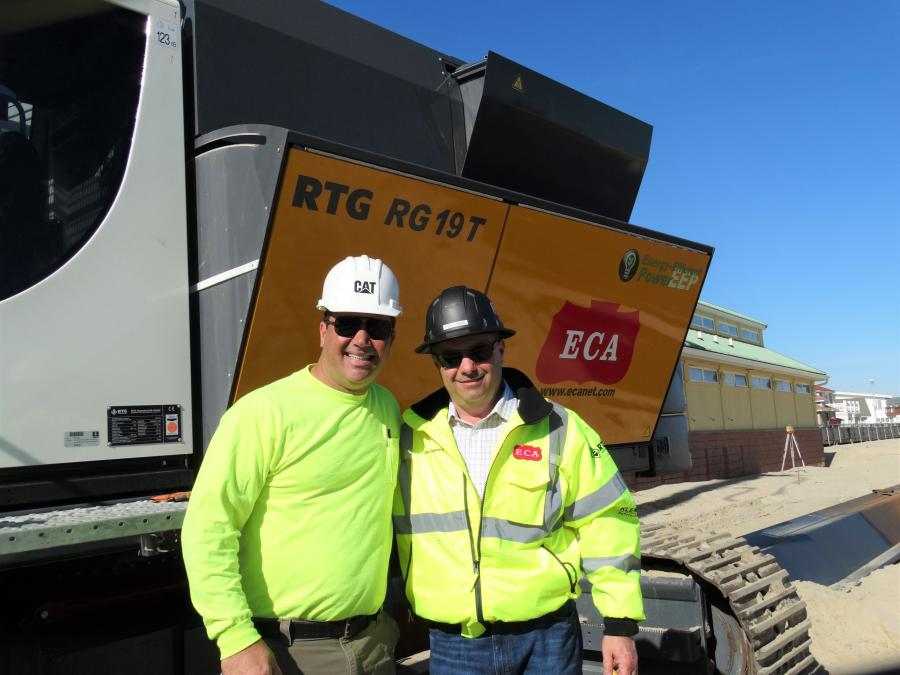 Burke Construction Inc.'s first pile driving project was no easy task. The job at hand for this heavy civil contractor was to install a steel seawall in Point Pleasant Beach, N.J., but this was no straight line of sheet piles in the middle of the beach. Burke's task was to frame the border of Jenkinson's Boardwalk.

Successful completion of the project would require the contractor to take on its first pile driving project and to learn and achieve adequate production with the RTG RG 19 T — one of the most sophisticated piling rigs in the world. Working around the inside and outside corners of the nearby boardwalk would only intensify the learning curve.

An RTG RG 19 T pile driver sits wedged in the shadowy corner of Jenkinson's Boardwalk, framed by stores. Burke's owner, Jason Burke, has a level in hand, checking to make sure a freshly driven sheet pile is plumb. This comes as no surprise for this hands-on owner who blends in with the crew.

Burke is the quintessential bold young contractor founder. His company is known for heavy civil work throughout Northern New Jersey, most recently having demolished the former Tappan Zee Bridge.

Asked if he had reservations about venturing into pile driving, he said, "Yeah, it was a bit scary. But so was taking on a job to demolish the entire Tappan Zee Bridge and we finished that six months ahead of schedule."

The fact that Burke's grand entrance into pile driving was the Point Pleasant Seawall is no coincidence. The contractor had previously installed well points feeding seawater to Jenkinson's Aquarium and also mobilized its large fleet of earthmoving equipment to clean up after Hurricane Sandy. The owner invited the firm to bid the seawall project as a result. 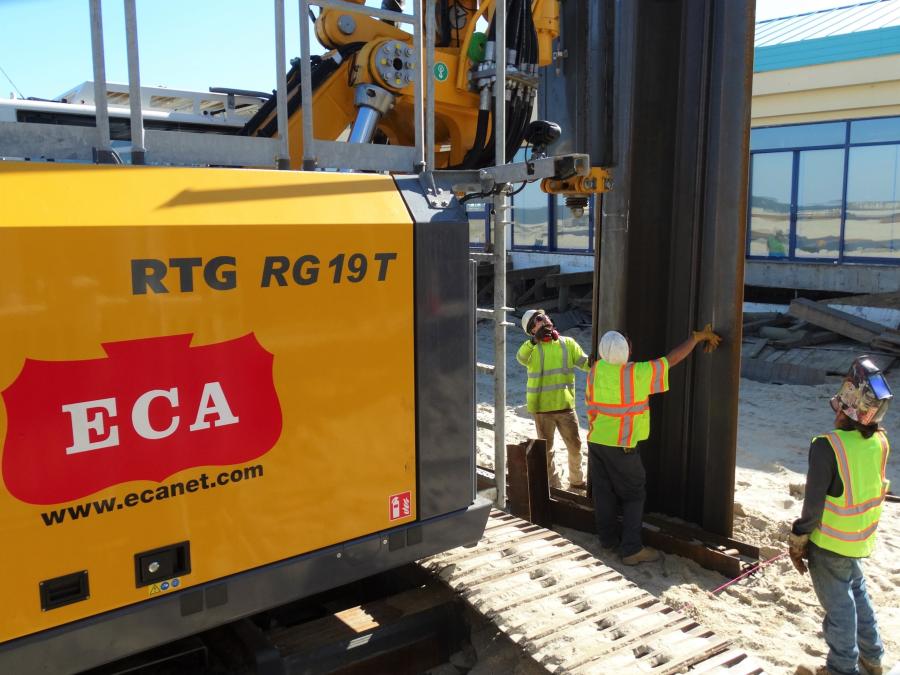 Burke, who said that brand is an important factor when he buys and rents equipment, was unfamiliar with RTG, but he had done business with ECA and appreciated that the company stood by its products. After being awarded the seawall project, he came to ECA Philadelphia's Account Manager Steve Sigmund and asked for a recommendation. He ended up renting the RTG RG 19 T pile driver equipped with an MRV 150 AVM Silent Vibro in September of 2019.

The RG 19 T is no entry level piling rig.

"We have a lot of experience with rock, sand, and beach work, but as far as piles, it's been very minor," Burke said. "Without that RTG rig, this probably would have been a two-contractor job because I would have hired somebody."

The RG 19 T had its work cut out with 801 2-ft. 4 ½-in. sheet piles supplied by Skyline Steel. Burke hauled the piles in from the Broadway entrance on the northern end and laid them out at their final destination.

On a mild November morning, the RTG piling rig was starting production on a short line of piles heading toward the ocean. Despite the proximity of the adjacent building, the operator was able to safely swivel 180 degrees to pick from a carefully laid out line of piles in the sand. 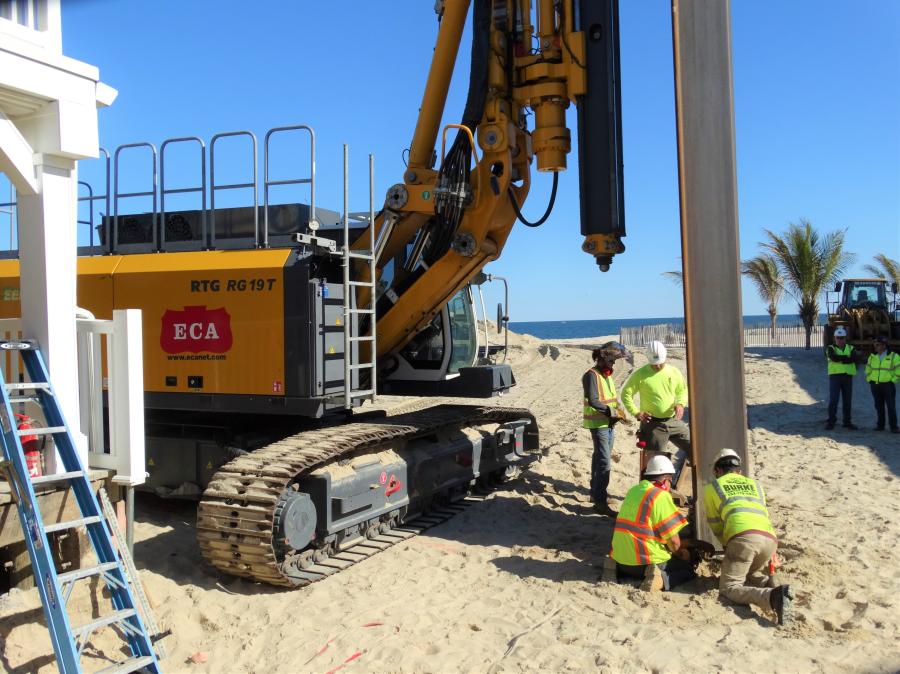 The RG 19 T vibrated each 4-ft.-9-in.-wide interlocked sheet pile into the beach, displacing 12,000 tons of sand in the process.

Burke used the RG 19 T to vibrate each 4-ft.-9-in.-wide interlocked sheet pile into the beach, displacing 12,000 tons of sand in the process. Heavy equipment was used to spread the material evenly across the beach.

Careful measurement was critical, especially since the sheets were cold-rolled steel.

"Every sheet gets measured," Burke said. "The extra give makes them a little easier to drive and put together but it also gives them the ability to roll a bit so you have to put a tape measure on every single one. We lock a clamp on the falsework beam and drive them so they stay right at four feet nine inches."

Burke's hand measurement was more about diligence than necessity because the RG 19 T is equipped with a fixed leader that secures the hammer snugly to the mast, allowing it to drive straight piles with high crowd forces and torque.

Burke's crew worked from south to north to ensure a smooth transition between NJ DEP's dune and its seawall. This required the temporary removal of the bordering dune, commencement of the Point Pleasant wall, and rebuilding of the dune at the transition point. All work was completed as promised on Nov. 1, 2019.

"We started at the hardest part and that was definitely a part of the learning curve," Burke said. "We had to go around three buildings and getting into the corners was very difficult because they were really tight."

"We've done 1,200 feet of wall with inside and outside corners and we're already hitting 100 feet a day," he said, joking that he plans to dance a jig when the crew hits the straight run. "Once we get to this straightaway that machine's [RTG] going to do at least 150 feet a day."

Burke doesn't think 200 linear feet a day is out of the question for the RG 19 T, but he doesn't want to sacrifice quality either. Because these are exposed sheets, the crew is achieving 150 linear feet a day based on keeping the piles perfectly straight and plumb.

Burke has no previous pile driving projects to compare productivity rates, but he has done the homework. He cited several contractor friends maxing out at 50 linear feet a day with crane-mounted piling hammers and recognizes that the RTG is tripling that production rate.

Although the RG 19 T is a complex piling rig, a standard heavy equipment operator can run it efficiently with some training and practice. ECA provided three days of onsite training to be exact.

"He's picking up speed as he's getting better running it," said Burke, noting that neither his operator nor ground crew had ever worked with sheet piles. "It comes down to the right manpower and tools." 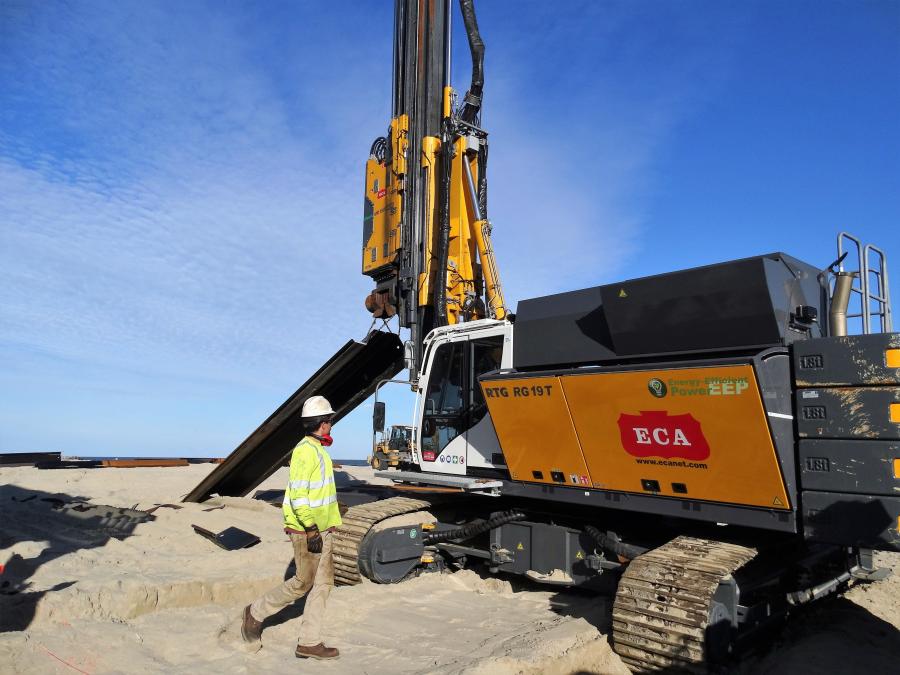 All sheet piles were delivered up front and carefully laid out on the beach before pile driving got under way.

Burke witnessed thousands of spectators propped against the boardwalk railing over the course of the project. Some were in awe of the machinery but most were there to express concern about the dune.

Seawalls are increasingly being built along the East Coast to protect communities from extreme weather. The approach of installing a straight wall or dune in the middle of the beach often draws the ire of beachfront residents in New Jersey communities because it blocks the ocean view. That was the U.S. Army Corps of Engineers' plan for the Point Pleasant Seawall, in fact.

The owner of Jenkinson's, in an attempt to protect the view for its residents, hired an engineer to design an alternative. They ultimately reached an agreement with the New Jersey Department of Environmental Protection (NJDEP) and the Army Corps to shell out several million dollars of its own money to build this seawall. It would run the entire length of Jenkinson's Boardwalk from Trenton Avenue to the Manasquan Inlet. 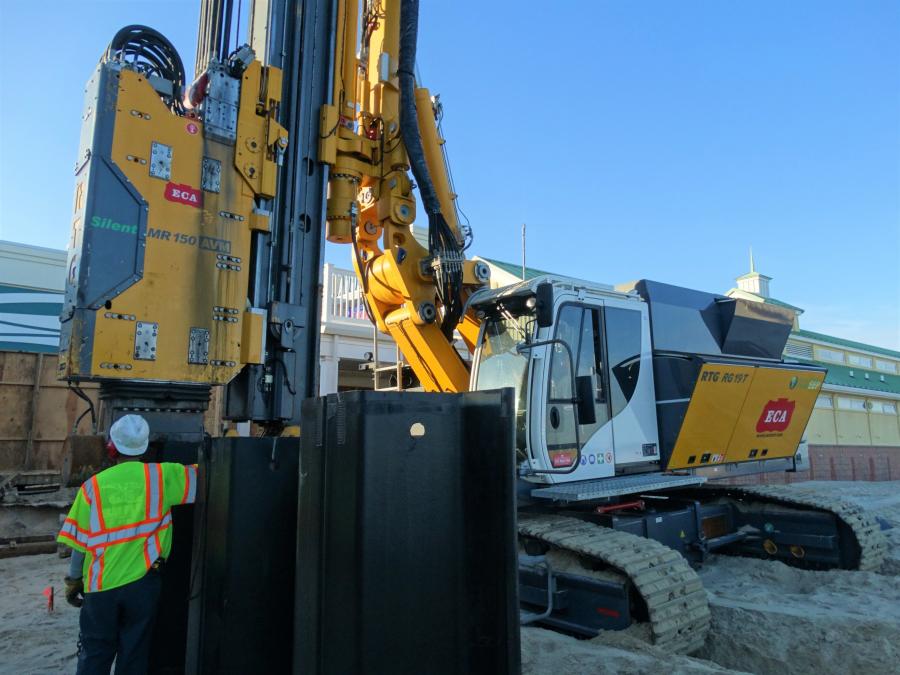 Burke was driving 100 linear feet of piles per day despite having to work alongside the jagged perimeter of the boardwalk. The contractor expected to achieve 150 to 200 ft. on the straightway.

"There's much more protection with the steel wall, and you keep the ocean view," said Burke, noting that the wood cap rises no more than 3 ft. above the boardwalk. "And it's all being done without a nickel of taxpayer dollars because the owners here took it upon themselves to fund the whole job."

As you walk up the ramp from the street side of the boardwalk near Jenkinson's Aquarium, it becomes apparent just how close the Burke team was working to stores and homes. And yet the sound of pile driving is barely audible between the storefronts. 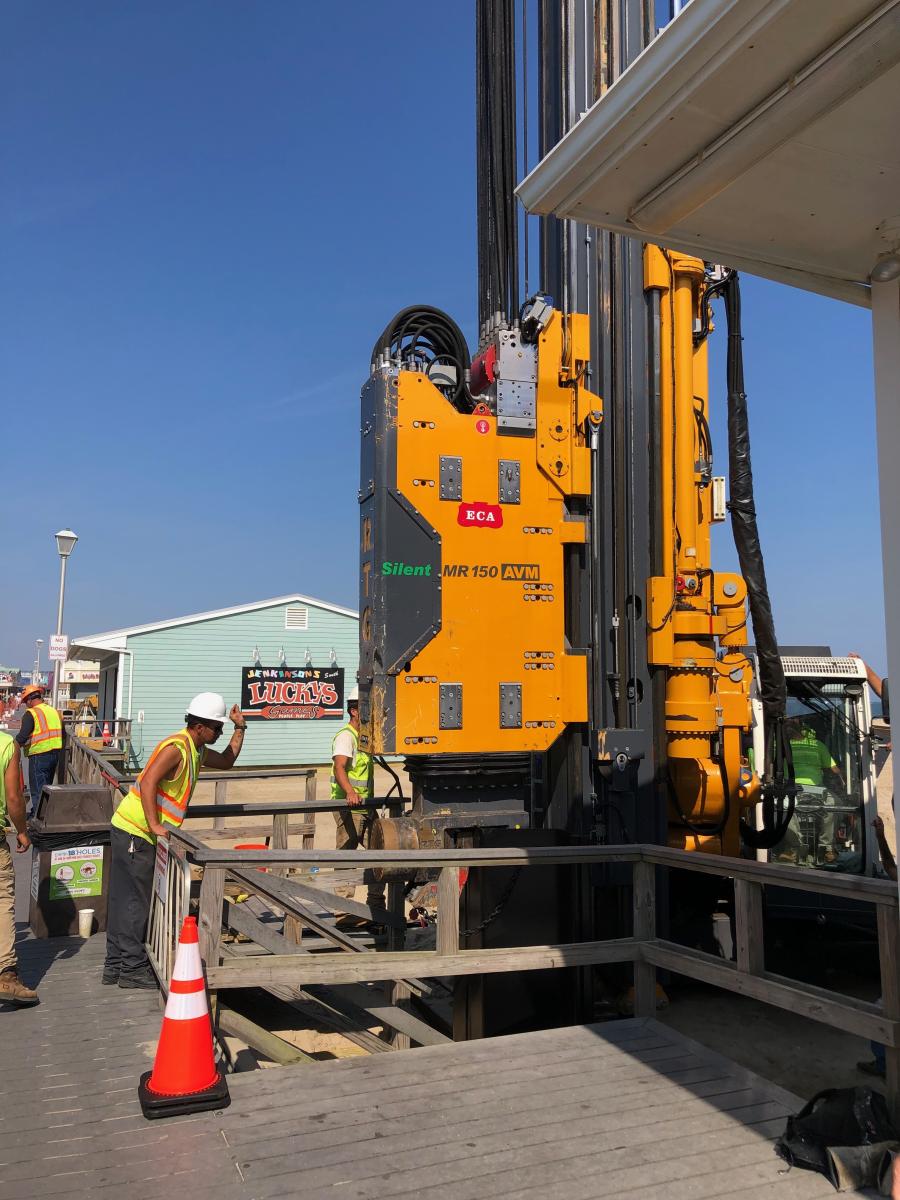 The MRV 150 AVM Silent Vibro was key to reducing disruption for stores and residents as Burke's crews drove piles within feet of the boardwalk.

The MRV 150 AVM Silent Vibro was key to avoiding disruption. This hammer achieved a reduction of 6 decibels from the previous model in 2017 with such features as encapsulation of the front section including the hydraulic motor; soundproofing of the spring suspension unit; soundproofing between spring suspension unit and clamping head; sheathing on all chains; and rubber coatings on all chain attachment points.

A seismologist remained on hand at all times conducting vibration monitoring properties near Burke's pile driving operation. He also documented the original condition of all homes along beach before work commenced. Store owners elected to conduct their own vibration monitoring to keep the project moving.

The Burke crew had just begun driving piles at the intersection of two stores in early November morning with 1,200 ft. of wall driven to date.

"The [RG 19 T] is only turned up to about 25 percent and it's driving 30-foot-plus sheets with ease without even triggering any alarm with the seismologist," said Burke. Although it wasn't required on this project, the RTG can deliver a maximum 31,473 foot-pounds of downward crowd force.

Putting the Finishing Touches on an Aesthetic Seawall

Nothing is done second class on Jenkinson's Boardwalk so it stands to reason that the seawall would also be first class. This seawall will be tasked with protecting a Trex boardwalk, stores, amusements, and million-dollar-plus beachfront homes.

The finished seawall will rise up just feet above the boardwalk. Once all piles are driven, Burke will shore up the wall to sustain the wrath of an angry ocean during a superstorm. 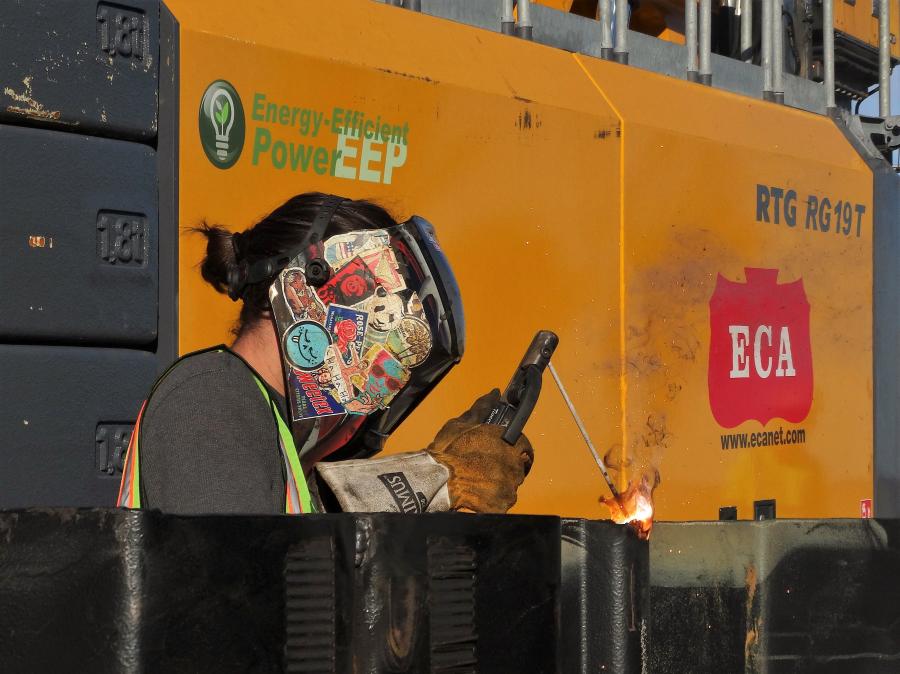 The piles themselves are coated with water-resistant coal tar epoxy. Once piles are driven, Burke's crew will excavate 8 ft. down to sea level and build a 12-ft.-by-8 ft. abutment wall with large jetty rocks for scour protection. The wall will be topped off with approximately 4,000 linear feet of capping and a decorative wooden facade secured by galvanized nuts and bolts.

Burke will wrap up the Point Pleasant Beach Seawall sooner than anticipated because of the RG 19 T's better than expected production rate.

"We have to be done by March 15th and I don't plan on being here in February," he said.

Based on his success, Burke plans to continue bidding on land-based piledriving projects.

"The only problem with the RTG is that it does the job so fast that I don't need to buy one and have it sitting for too long," he said. "It looks like I'll have to continue to rent it for future projects."