Burlington, Vt., to Do Pre-Planning for Railyard Road Project 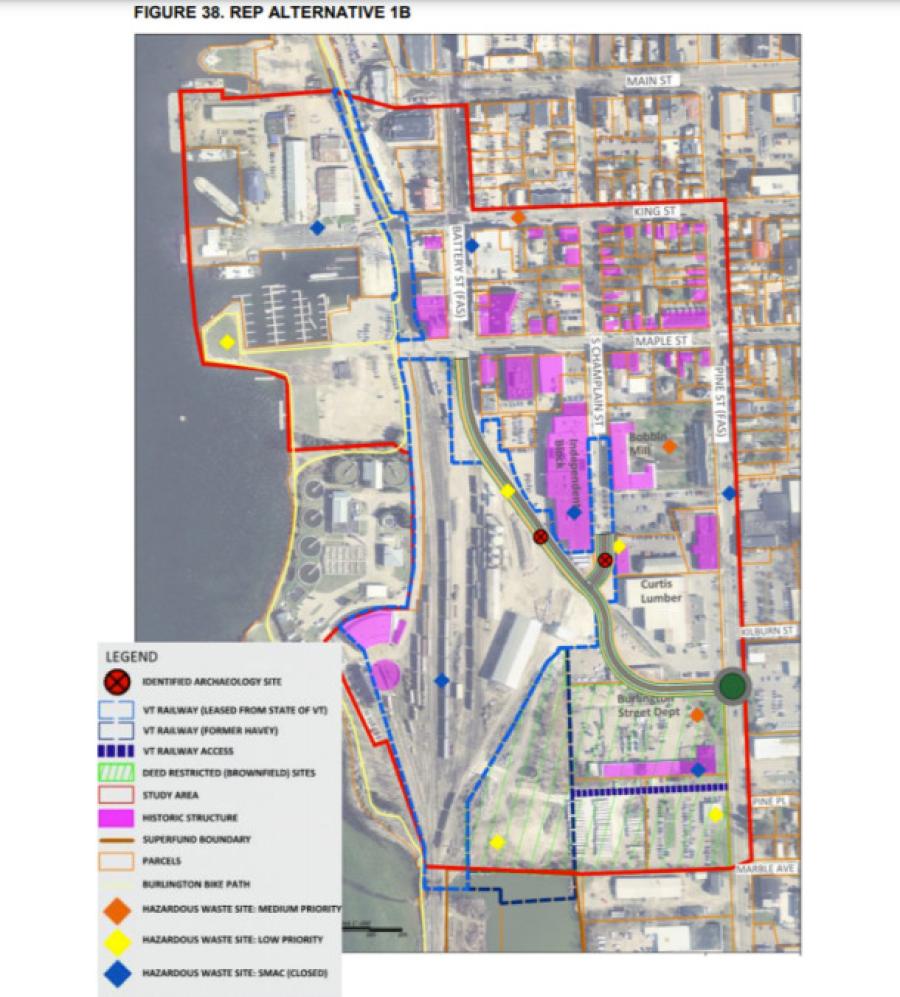 One of several proposed plans for the corridor connecting Pine Street and Battery Street. (City of Burlington photo, November 2016)

Preliminary engineering on Burlington, Vt.'s railyard enterprise construction project, which will link Pine Street with Battery Street, is slated to begin this summer.

The city has long hoped to connect the two major roadways downtown, in part to ease traffic on nearby King and Maple streets, residential areas often congested with cars. Yet progress has been slow — planning for the enterprise's construction has dragged on for more than eight years.

The new momentum on the project, which Burlington Mayor Miro Weinberger announced formally the last week in December, comes after a commitment by the Vermont Agency of Transportation (VTrans) and the Federal Highway Administration to contribute 10 percent and 80 percent of funding for the project, respectively.

The city council voted unanimously Dec. 21 to move the project forward, which Weinberger called "a big step toward making this vision a reality."

Without a final design, the precise cost of the project currently remains uncertain. The city has estimated it between $18 million and $22 million, and Burlington plans to pay 10 percent of that total.

In initial public debate over the project in 2015, some residents raised concerns that the project could displace tenants and harm businesses in the area.

However, the current construction plans, though not yet final, mostly evade any impacts to private property and residential buildings. The construction could still cut through the railyard, and in one proposed plan would affect a Champlain Street office building.

"The railyard enterprise project is a transformational project for Burlington, no doubt," said Chapin Spencer, director of the city's department of public works. "It has been a goal of the city for years, decades."

Initial scoping for the project began in 2012, and more detailed plans were laid out in November 2016.

Yet the project is still far from completion. Preliminary engineering is scheduled to begin in July, once the money is allocated in the state budget for the next fiscal year, and the city hopes to have a final design by 2022.

Spencer estimates that construction will not begin until at least five years after the scope of the project is finalized. That means construction may not start until 2027, though that date depends on the complexity of the project design developed in the coming months.

Still, some have voiced their early support for the project.

"This is great news for the King and Maple neighborhood," said Michael Monte, director of the Champlain Housing Trust, in a press release, noting that it would improve the area's livability.

The plans are still subject to a federal environmental permitting process, which will evaluate the various proposals and assess their social and environmental implications.