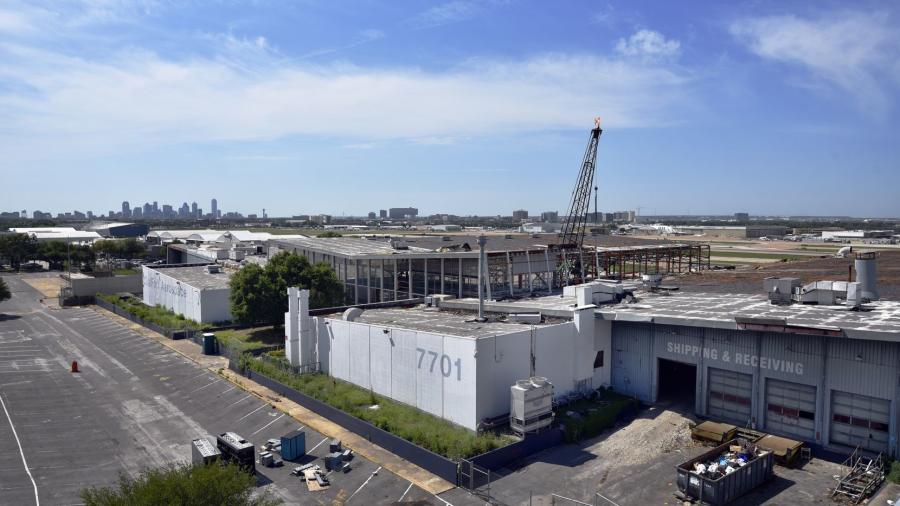 The 26-acre, more than $100-million mixed-use redevelopment project includes 120,000 sq. ft. of hangar space paired with office and retail operations, hospitality facilities and entertainment venues for more than 200,000 sq. ft. of use space in the total facility.

Burns & McDonnell has completed design and construction services for the redevelopment of the historic Braniff Operations and Maintenance Base in Dallas. After sitting dormant for more than two decades, the aviation landmark is flying high once again, this time as the Braniff Centre — an aviation hub and multi-use facility designed to generate corporate and commercial momentum along the east side of Dallas Love Field Airport.

Burns & McDonnell, in association with Dallas-based national construction firm The Gravity Company, was selected to provide design-build services for the Braniff Centre's executive terminal and its components in 2015. The engineering, architecture and construction firm was also tasked with restoring the façade of the base's central atrium — a concourse structure nestled between two sloping hangar wings to resemble a bird in flight.

Construction began in March 2018 and the project team's 18-month timeline was met on schedule with the facility's completion in October 2019. At full build-out, the Braniff Centre is projected to create more than 1,200 aviation, office and retail jobs for the Dallas and Fort Worth communities.

"We are honored to provide design and construction services to help revitalize one of the most iconic structures in our nation's aviation history," says Scott Clark, vice president and general manager for Burns & McDonnell in Dallas and Fort Worth. "The Braniff Centre redevelopment project exemplifies our firm's continued commitment to the progress and prosperity of the Dallas and Fort Worth communities."

The 26-acre, more than $100-million mixed-use redevelopment project includes 120,000 sq. ft. of hangar space paired with office and retail operations, hospitality facilities and entertainment venues for over 200,000 sq. ft. of use space in the total facility. Working closely alongside the Texas Historic Commission and the site development company CLT (Cowboys, Lincoln Property Company and TAC- The Arnold Companies), Burns & McDonnell and The Gravity Company developed a design and master plan for the Braniff Airways former mid-century modern facility.

Emphasizing the high quality service and design execution, Greg Arnold, Chairman and CEO of TAC-The Arnold Companies and TAC Air said, "Burns & McDonnell focused on revitalizing this historic site to represent the original architecture and aviation theme while updating the structure to meet the rigorous requirements of today's general aviation and retail customer. With this design and construction in place, TAC Air — DAL and the Braniff Centre are the 'Leading Edge' of Dallas Love Field."

Striving to fulfill the developers' preservation-oriented vision, the Burns & McDonnell team restored the central atrium's flight-inspired façade while also retaining the building's original color scheme. The base's pair of 60,000-sq.-ft. hangars were modernized to accommodate today's aircraft and were upgraded with state-of-the-art fire protection systems, lighting and aircraft ground power systems. Additionally, a new TAC Air fixed base operation (FBO) terminal complex — constructed as the west entryway into the Braniff Centre — is primed to provide private aviation travel a gateway to the city of Dallas.

"While updating the structure to support contemporary aviation services, it was also crucial to protect its architectural integrity and historical legacy," says Chris Hotop, aviation projects director of Burns & McDonnell. "Our design-build team created and executed a design that honors the rich history of the building's past while embracing the exciting possibilities of its future."

Braniff Airways' former operations and maintenance base was built to accommodate the airline's growing fleet of commercial jets at the dawn of the Jet Age. Opening the doors of its Love Field home in 1958, Braniff supported millions of passengers traveling through Dallas until the airline ceased operations in 1982. Over the course of the next decade, additional airside land parcels will be made available to private aviation operators and commercial developers to encourage the complex's continued expansion.