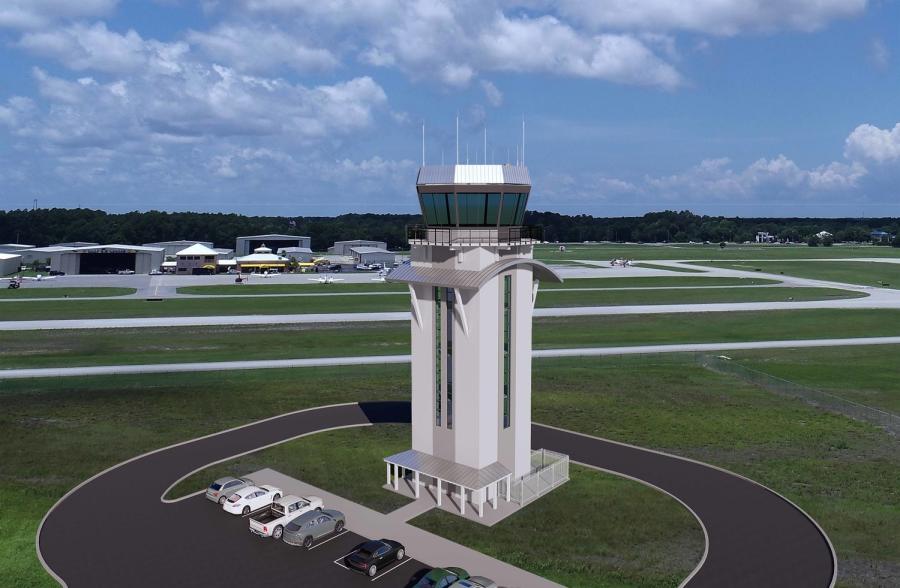 The Airport Authority of Gulf Shores held a groundbreaking ceremony Sept. 8 for the airport's new air traffic control tower facility. The much-needed tower will help with directing air traffic and increase safety at the second busiest airport in Alabama.

The new, six-story facility will be the first of its kind at the airfield when it is completed at the end of July 2021. It will better manage takeoffs and landings from the airport's 6,962-ft.-long runway, located just 2 mi. from the Gulf of Mexico.

White-Spunner Construction Inc. in Mobile is the general contractor of the control tower project.

The new tower was made possible through $6.13 million in grant funding from both the Federal Aviation Administration (FAA) and the CARES Act, secured for the Alabama airport by the joint efforts of U.S. Senator Richard Shelby and Congressman Bradley Byrne. The CARES Act, or Coronavirus Aid, Relief, and Economic Security Act, is the $2.2 trillion economic stimulus bill passed by Congress and signed into law by President Trump in March in response to the economic fallout caused by the COVID-19 pandemic.

Due to the additional funding contributed through the CARES Act, the Jack Edwards National Airport tower is now 100 percent grant funded. The $600,000 set aside earlier by the Airport Authority to fund the tower will now be reallocated to a future air terminal project.

Work on the tower had hardly gotten started before it was shut down due to Hurricane Sally roaring through the area the third week of September, according to Scott Fuller, manager of the Airport Authority of Gulf Shores. Damage was reported at the airport, he said, but as of Sept. 23, he expected construction activities to resume soon.

At the groundbreaking ceremonies Sept. 8, Fuller introduced John Pearsall, CEO of Elite Airways, who spoke of his company's intent to begin providing the residents of Gulf Shores with scheduled service.

"A lot of our routes are on the East Coast presently but with this tremendous reception that we've been given by Scott and his team, we are just amazed at what a terrific area this is," Pearsall said. "You people are really blessed. We are very proud to be able to announce that we will have some upcoming air service here and we are working on the destinations now with Scott and his team."

The Airport Authority also hopes the new construction at Jack Edwards National Airport will boost the facility's efforts in remaining a competitive transportation hub for the cities of Gulf Shores, Orange Beach and south Baldwin County – a key element to attract more visitors and industry to the Alabama Gulf Coast.