Busy U.S. Airports Ready for Anything in Winter

Summer had only just ended in the Front Range of Colorado, in and around Denver, when the area received its first snow accumulations on Oct. 10. It was little problem for area motorists long accustomed to early winters and maneuvering through the white stuff. They benefit from having a state DOT that is among the best in the nation at removing snow and ice from roadways.

But airline passengers flying in and out of Denver International Airport also need to have the peace of mind that they, too, can be safely transported during snow and ice storms. Lucky for them, the facility has its own crack staff of snow removal professionals on hand to keep the major hub operating throughout the worst winter weather. More than 500 people work to clear snow and ice each winter at the city's airport, which averages 56 inches of snow.

Denver is among four of the six most active airports in the nation that, to varying degrees, experience snow and ice each winter. Chicago O'Hare and New York's JFK also make the list due to their locations in the Snow Belt. Even Atlanta, by far the nation's busiest, sees wintry precipitation despite its location in the Deep South.

The United States' third busiest airport, O'Hare International, just as tough as Chicago itself, has a long history of brawling with and disposing of snow and ice. In the 2019-20 season, O'Hare is dedicating 255 pieces of equipment and about 600 city staff to snow removal, including 26 plows; 35 runway brooms; 59 multifunction units; 21 deicers; 19 spreaders; and five blowers.

While the airlines themselves are responsible for applying deicing liquids to their planes, most airports provide support facilities to the carriers for them to do so.

Deicing an aircraft prior to takeoff is performed at all airports when temperatures are at or below freezing and ice has formed. Untreated, ice on airplane wings can prohibit the lift needed to fly and, when lodged within engines, can cause catastrophic damage.

This past February, the CDA and O'Hare opened the airport's first dedicated deicing facility to allow airlines to treat their aircraft away from the gate and closer to departure during snow events. The 835,000-sq.-ft. facility — the equivalent of 17 football fields — is the largest deicing center of its kind in the United States and second largest in the world.

"The deicing pad accommodates up to 20 narrow body airplanes or five wide body airplanes at a time," said Karen Pride, director of media relations at the Chicago Department of Aviation (CDA), the city agency that manages the airport. "During snow events, hundreds of flights could be deiced on any given day."

Ice a Bigger Issue in Atlanta

With 107 million passengers transitioning through in 2018, Atlanta Hartsfield-Jackson International (ATL) generally only sees a fraction of the snow that the other air facilities routinely receive.

However, north Georgia often gets crippling ice storms, which causes ATL to plan for its anticipated winter weather just as judiciously as the others.

"We form several different teams that work in 12-hour shifts during the season," said Paul Meyer, ATL's assistant general manager of operations maintenance and transportation. "When ATL is expecting bad weather, we implement the Winter Weather Operations Response Plan that includes staff from other areas of the airport to assist in the operations."

ATL's Maintenance Division has a year-round plan for maintaining its specialized equipment used during winter weather events, he added. Each piece is inspected once a month to ensure its readiness.

The airfield employs about 200 people for snow removal, in addition to a variety of equipment and attachments, such as multi-function plows, high-speed plows and straight-blade plows, deicing equipment, spreaders, blowers and brooms. In all, the facility, operated by the Port Authority of New York and New Jersey (PANYNJ), has approximately 100 pieces of equipment for its runways, taxiways, tarmacs and ramps.

"The type of winter equipment that any airport uses are determined by factors such as the type of snow, depth of snow, wind speed and direction, and the temperature," said Alana Calmi, a spokesperson for the PANYNJ. "During heavy snows we will drive approximately 20 vehicles in tandem in order to clear each of our four runways."

She added that JFK's winter maintenance department begins planning for snow over the previous summer. That includes classroom training, planning meetings, hands-on equipment training, and "dry runs," which involve taking the equipment out on the runways and taxiways to practice driving in formation and performing snow clearing maneuvers.

Many airports that see heavy snow accumulations, such as those in New York, Chicago and Denver, also utilize snow melters — machines that allow for loaders to dump mounds of snow into the units where hot water or flame burners convert them into water for discharge into drain systems. These machines can handle hundreds of tons of snow per hour and eliminates snow from being piled up on the edges of runways and tarmacs.

Denver Battles Wind as Much as Snow

The most impressive thing about Denver International is not that it's the fifth busiest in the nation, but that it encompasses a massive 33,531 acres, making it the largest airport in North America. Also, one of its six landing strips, Runway 16R/34L, stretches for 3.03 mi., the longest on the continent.

Those numbers equate to a lot of snow to plow during Colorado winters. 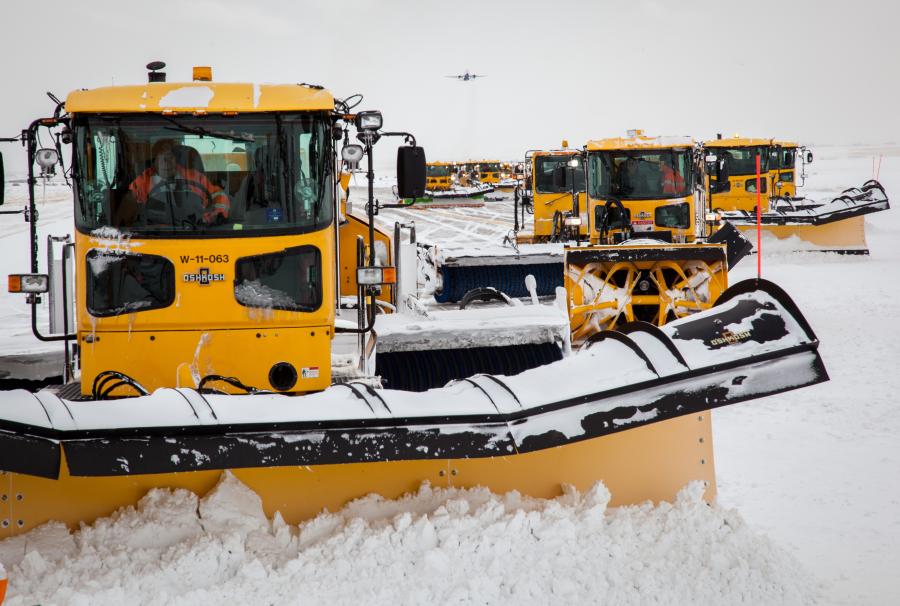 Rich Brannan, Denver International's assistant director of field maintenance, said his department's crews don't find snow and ice removal too difficult, unless it's in the teeth of the often-high winds that buffet the airport, located on the high plains east of the Rockies.

"We have all the equipment and manpower necessary to remove snow, no matter the depth," he said. "Most of the time [the airfield has] been closed has been when we have had 50+ mile-per-hour winds. Blowing snow reduces visibility and becomes a big safety concern, which causes us to simply stay off the airfield. When you get that kind of wind and you are pushing three to eight inches of snow, you can't see more than two feet in front of your face. And there isn't too much you can do about it."

While salt-based chemicals are often applied to highways to melt ice and snow, the downside is that cars and trucks are more susceptible to rust damage. But even a small amount of corrosion on an airplane can be deadly, so airports turn to specialized chemicals that don't affect the metal on an airframe.

"The airside areas at O'Hare International is treated with potassium acetate liquid and sodium formate, a granular solid," said Pride. "For increased friction, sand is used when needed. Salt is only used on landside roadways, as it's illegal for use on aeronautical areas due to its corrosive properties." CEG