Although snowplows are made for everything from skid steers to pickup trucks to motor graders, this guide will instead focus on the biggest snowplows — those attached to dump-truck chassis. These vehicles are ubiquitous on roads in states where heavy snowfall is common each winter. 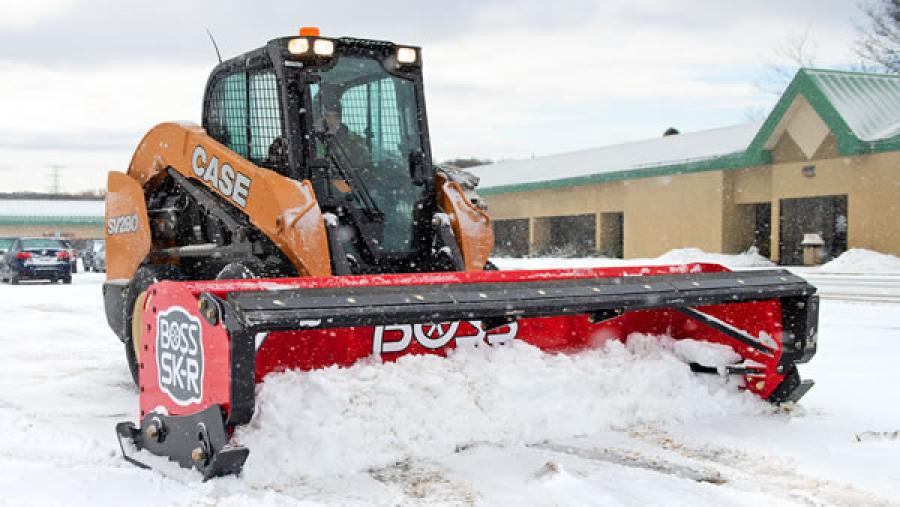 When snowplows are attached to big trucks via hitches, the entire entity becomes known as a winter service vehicle (WSV) or a heavy-duty municipal truck. Those plows that work on freeways and other important routes are built to move at relatively high speeds during operation.

Snowplows mounted on the front, sides (wing plows) or underbody (ice scrapers) are the main attachments needed to convert a dump truck into a big WSV. Also, the body of the truck usually has the capacity for a load of salt and/or sand for discharge onto the road behind the plows.

How to Select the Right Snowplow

When choosing a snowplow for a large WSV, you want one that not only meets your needs and budget but promises to be durable for many years. For that knowledge, it’s important to seek the advice of a trusted equipment dealer or manufacturer. Before making an appointment, though, do a little online research to see what snowplows are on the market and see the various plow designs available. It’s always smart to have a better idea of what you want before you step into the showroom.

As you’re looking, pay careful attention to the snowplow sizes needed for large WSVs. For instance, many DOT fleet managers and contractors prefer a front-mounted snowplow that is at least nine- to 9½-feet long, although they can be up to 14 feet or more for use on thoroughfares. Another factor to consider is the reliability of the cutting-edge blade systems on the plow’s edges. Most snowplow manufacturers employ their own blade technologies or rely on proven parts makers to supply them with blades that cut through the toughest ice and snow.

What are the Basic Types of Snowplows

Front-Mounted — The most common in use, they are designed to push snow off the road with an angled blade, either to the right or left. In addition, they are built for punishing use and must be able to endure harsh conditions for many seasons. Reversible, straight and V-plow models, as well as flexible plows to accommodate the varying contours of a road, are standard on an WSV front. Many front plows can also be extended lengthwise for moving more snow.

Wing Plows — By using a wing plow, in tandem with front plows and scrapers, crews can improve their snow clearing performance in one pass by plowing a dramatically wider swath. Although generally mid-mounted, some manufacturers offer rear-mounted models, too.

Underbody Snow and Ice Scrapers — The type name pretty-well describes exactly what these plows do. They work in addition to the other plows and have largely taken over the role of cutting into ice and hard-packed snow from the front plows. Many companies offer reversible scrapers, too.

The number of different snowplow subsets available to buyers is too many to list in this guide. That’s because within each basic plow set for a WSV are a variety of plow models tailored for distinct snow removal jobs.

If, for instance, you are in the market for a front-mounted plow, you will need to decide between a V-plow or a straight blade snowplow. You can’t go wrong with either one, but straight blade snowplows generally cost less than V plows. The advantage of a V-plow is that it’s better at angling and directing snow, as well as stacking snow – a job straight blades cannot do. Also, when confronting snow that has almost turned to ice, the V-plow’s arrowhead configuration can slice through hard snow better than the flat surface of a straight blade.

Although many companies make snowplows, a smaller group of producers make the attachments that fit the big WSVs. Following is a list of some plow builders and examples of their model line:

Buyers Products — Through its line of tough SnowDogg plows, Ohio-based Buyers Products offers a variety of top snowplows for heavy-duty road clearing. A prime example is the front-mounted 42-inch Full Trip Stainless Municipal Plow Assembly. With a choice of plows from 10-to 12-feet long, this line allows you to choose the attack angle you need with four adjustable positions. It’s built with a corrosion-resistant stainless-steel moldboard and will stand up to heavy use with eight laser-cut steel ribs and two structural steel horizontal braces.

Everest Equipment — Everest’s rugged and innovative equipment has made the Quebec manufacturer a favorite of many highway departments and contractors. It’s full line of snowplows, including the Mid-Mount Series of wing plows, are available in 10-, 11- and 12-foot lengths. In the travel and plowing mode, both the cab’s driver and passenger can easily view the side wing. In addition, each model utilizes a rear-mounted lift cylinder for better wing control and holds it in a rigid position while in travel mode.

Falls Plows — Another company located in snow country, Falls builds its snowplows in Little Falls, Minn. The Falls Underbody Scraper, mounted in combination with the maker’s front and wing snowplows, is a powerful ice and snow fighter on America’s roads. The scrapers come in sizes between 10-12 feet in length and are made up of a durable carbon steel moldboard up to an inch thick.

Gledhill Road Machinery — Another Ohio company, Gledhill makes its trademark Jetstream snowplow line, six models designed with two symmetrical and inverted funnel-shaped discharge ears to pick up snow and throw it far off the road, either right or left. Jetstream snowplows are available in 10-, 11- and 12-foot lengths with three different heights.

Meyer Products — From its plant in Cleveland, the 90-year-old company produces it’s toughest and biggest snowplow: the trademark Road Pro 36-Series, built to effortlessly muscle snow aside. It does so with an aggressive 65-degree attack angle, a three-foot moldboard height and a 15-inch radial overhang. The snowplow’s pivot design allows it to automatically oscillate five degrees on each side to follow the contour of the road so more snow can be cleared in less time.

Wausau Equipment — With a motto of “Keeping Ahead of the Cutting Edge”, New Berlin, WI-based Wausau produces all types of snow removal attachments, including five V-plows, three of which are perfect for clearing wintry road and highways. The manufacturer’s V-plows sport cutting-edges that range from nine-feet, two-inches to 10-feet in width, and are seven-feet, six inches high at the discharges. The moldboards on Wausau’s V-plows are contoured for deftly opening drifted roads or for high-speed casting (forcefully moving through snow).