For use with trucks, there are two basic styles of spreaders — insert hopper spreaders and tailgate spreaders. This guide will focus primarily on those designed for pickup trucks and bigger winter service vehicles (WSVs). Many manufacturers also fabricate an under-tailgate spreader that attaches beneath the back of the chassis of a wide dump truck, thus converting it to a spreader. Wheel loaders can work as spreaders, too, due to large salt buckets that haul and spread grit where needed on roads and large parking lots. 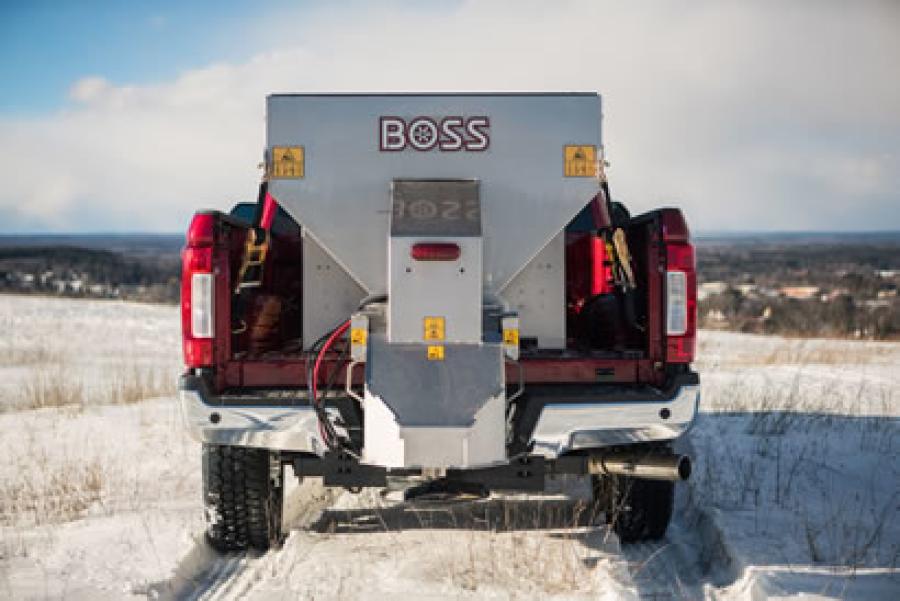 How Do Spreaders Work

Reliable spreaders battle ice and snow by broadcasting salt and sand onto roads for improved vehicle traction. The mixture of the two is simple: sand provides the traction and salt accelerates the melting process.

Almost every spreader is made up of the same basic components: a hopper to hold the salt and sand; a gate that allows the material to drop through the hopper; a rotating disc (known as a spinner) for throwing the mix in all directions onto the road; baffles to guide the salt and sand from the spinner; and a drive mechanism to turn the spinner.

As an example, big WSVs often have up to 16-ft. dump bodies (or boxes) with insert spreaders filled with salt, sand, or a combination of both. The functions of the spreader are typically controlled by the driver from inside the vehicle’s cab. When it’s time to spread, the salt mixture is moved to the back of the body via a conveyor, where the mixture then passes through the rear hatch and drops onto the distributor at the rear of the truck before being broadcast.

What are the Common Types of Spreaders

Insert Hopper Spreaders — These spreaders are set within a truck’s bed and requires a conveyor system to help feed the mixture to the spinner. Like tailgate spreaders, insert hoppers allow you to control the amount of material being delivered, but the latter will give you much better control of the amount of salt and sand delivered through the unit.

Tailgate Spreaders — While an insert hopper spreader relies on a host of movable parts to distribute a mixture to the road surface, tailgate spreaders simply rely on gravity to do its job. The funnel-shaped hoppers that characterize tailgate spreaders mount onto the back of compatible trucks in order to distribute bulk amounts of material onto roads.

Before buying a spreader for large and medium-sized dump trucks, as well as pickups, it’s imperative that you do your homework on what attachment fits your needs and what manufacturer gives you the best value. Check the Internet to research what spreaders are on the market and seek the advice of a trusted equipment dealer or manufacturer.

Whether you buy equipment for a large DOT or are a one-person operation, look for a salt and sand spreader that fits within your budget by focusing intently on product reliability and durability. Keep in mind that spreaders are built using one of a trio of elemental materials: carbon steel, stainless steel and polyethylene, each one being better than the next when it comes to corrosion resistance. The corrosive effects of salt and sand undeniably has the most detrimental impact on a spreader’s life. The correct makeup of the spreader will end up saving you money in the long run.

Arctic Snow & Ice Products — The Illinois-based equipment company has introduced its all-new DoubleDown Salt Bucket in three sizes, with its largest tailored for wheel loaders. The bigger of the two models has a bucket size of 112.5 in. wide, 68.7 in. tall and 62.1 in. in length. Most importantly, when fully loaded, the salt bucket can hold approximately 13,242 lbs. of grit.

Ideal for working on snow-covered parking lots, the design of the DoubleDown allows its operator to simply tilt, scoop and spread. The piece’s independent left and right spinner controls can spread up to 50 feet on either side (with a total spread width up to 100 feet) underneath parked cars.

BOSS offers it with three different capacities up to 2 cu. yds. The hopper also is made with a combination of bolting, riveting and welding for optimal durability and serviceability that allows for replacing individual parts rather than the entire unit.

Buyers Products — Buyers Products sells a large variety of top-shelf spreaders through its SaltDogg division. An example of its engineering is the Hydraulic Under Tailgate Spreader model utilizing prime 304 stainless-less construction.

The Mentor, Ohio, company builds this attachment to work with dump bodies as wide as 96 in. and sports a rugged 6-in. auger with 3/8-in. flighting (the direction the auger is turning) for a steady material flow. It easily handles bulk sand, salt or a 50/50 mix and can broadcast up to 40 ft. with its 18-in. poly spinner.

Henderson — A heavy-duty precision spreader that has become a legendary machine among snow removal pros, the Henderson FSH insert hopper is built for use on municipal and highway snowplows. These big boys are currently available in three versions, each having subtle differences that depend on length, height and capacity. The FSH insert hopper comes in lengths from 8 to 16 ft. and a maximum capacity of 13 cu. yds. on the largest model. It’s powered hydraulically using an electric motor and it offers multiple control and conveyor options, as well.

Built in Iowa, one of the hallmarks of Henderson’s FSH spreaders are their controlled delivery of mixture to the roadway and a low maintenance design.

Hiniker – Located in the tundra of Minnesota, Hiniker’s factory produces a diverse line of snow and ice removal products, including its SS1000 “No-Dribble” Flow Control Spreader. This tailgate-mounted spreader also provides optimum control when broadcasting salt and sand. Its specially designed auger system prevents material from dribbling and leaking through the spreader when the motor is stopped.

As an option, you can also put the spreader onto a Hiniker-made swing-away hitch that gives you quick and convenient access to your pickup truck bed and tailgate.