The year was 1958 and two, two-lane bridges on U.S. Highway 10 were built to cross what would be Interstate 75 in Bay County, Mich. That was the last time these structures were replaced. 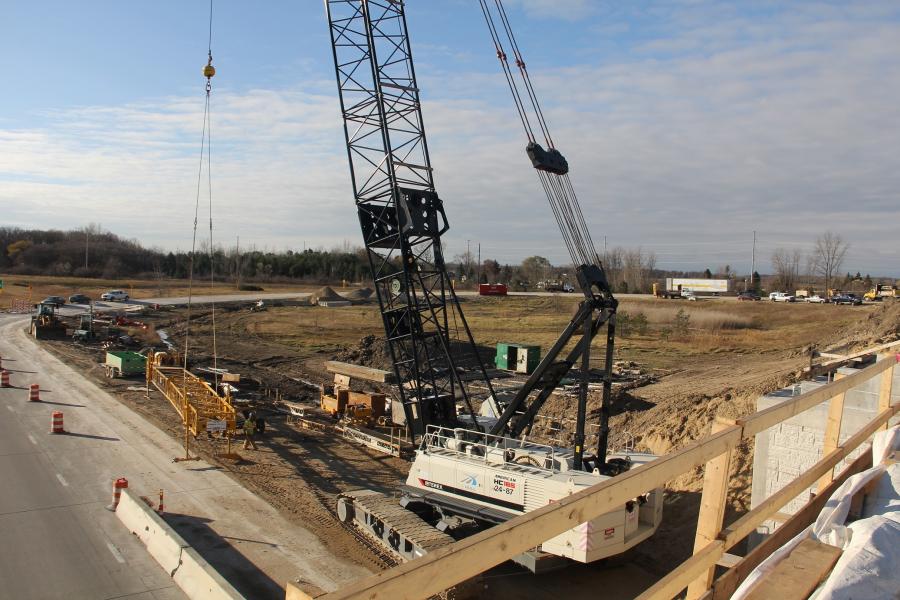 The year was 1958. The National Aeronautics & Space Administration (NASA) was formed. The iconic '57 Chevy celebrated its first birthday. And two, two-lane bridges on U.S. Highway 10 were built to cross what would be Interstate 75 in Bay County, Mich. That was the last time these structures were replaced.

When the original structures were built in the '50s, traffic count was lower, making construction of the US-10 bridges much easier. Today, more than 50,000 VPD pass under the US-10/I-75 interchange, creating a bit of a challenge to build new bridges to span the busy interstate. “Time,” says Project Manager for C.A. Hull, Rick Smith, “was definitely the biggest challenge affecting the lifts to place the I-beams on the piers.”

Work crews had just eight-hour overnight windows over two nights to place the beams over the southbound and northbound lanes. This meant that C.A. Hull had to pick the right lifting equipment to efficiently position the beams. For them and for the job, the cranes that were the right fit for the project were the Terex® HC 165 and HC 110 lattice boom crawler cranes.

Each of the 16 I-beams supporting the westbound and eastbound (32 beams in total) US-10 travel lanes measured 104 ft (31.7 m) in length and weighed approximately 43 tons (39 tonnes). “C.A. Hull required lifting equipment that offered the combination of high lift capacity and compact size to meet the congested space confinements of the job site,” recalls Vince Voetberg, Michigan Manager for Jeffers Crane Service Inc., a member of the ALL Family of Companies, and a Terex Cranes equipment distributor in Michigan.

Smith reports considering a couple of different alternatives for the project. One option was to use a large hydraulic crane to position the beams into place. Yet beam size and weight would have required the work crew to reposition the crane multiple times for load rating, based on radius, and the I-75 lanes would have to be closed before crane set-up.

“We also had to place the false decking and fascia platforms while the interstate lanes were closed,” offers C.A. Hull's Project Engineer, Elias Motz. “We would have not been able to complete all the lifts in the time allotted to us using the single crane option.”

The other alternative was to employ a tandem pick using smaller crawler cranes. C.A. Hull planned to position one crane in the median separating the northbound and southbound I-75 lanes, while the other would be placed adjacent to the abutment wall on the shoulder.

“In this application, it was far more efficient to use the two-crane option in order to complete the lifts within our allotted time,” explains Smith. Voetberg adds, “This is why C.A. Hull is one of the largest bridge contractors in Michigan. They consider all viable options and select the best alternative to efficiently and safely complete the project on time.”

Selecting the two-crane option, the Terex cranes were employed because of their compact size, system length and capacity, and ease of assembly/disassembly. The plan called for the HC 110 crane to be positioned in the median of I-75, while the larger HC 165 crane would be placed near the abutment wall.

To make the 90-mi (145-km) trip from C.A. Hull's Walled Lake office to the Bay City US-10/ I-75 project site, the HC165 crane required eight truckloads to move the carbody, boom segments and full counterweight, while the HC110 needed only five truckloads. It took C.A. Hull's four-person crew less than five hours to set up each of the two cranes and have them ready for the lifts. “The cranes are easy to assemble and disassemble, which definitely saves us money,” says Smith. “They are very good for bridge construction.”

The Terex crawler cranes offer a hydraulic counterweight install/removal system to reduce rigging time, which eliminates the need for and expense of an assist crane for assembly/disassembly. “The HC 165 crane can lift its entire 108,400-lb (49.2-tonne) upper counterweight stack into position in a single operation,” mentions Voetberg.

With its 20.7-ft (6.3-m) track-to-track width and 165-ton (150-tonne) maximum lift capacity, crews positioned the HC 165 crane on the interstate's shoulder near the bridge's abutment wall. The crews installed 160 ft (48.8 m) of main boom and a 4-part line for the project. “This crane crawled during the lift to make sure the beams were properly positioned,” adds Smith.

After the cranes were rigged and final preparations were made, it was time for crews to start the lifts. Freeway closures were allowed from 10 p.m. to 6 a.m. the following morning, in which either the northbound or southbound lanes of I-75 could be closed. For construction of one bridge spanning the closed southbound I-75 lanes, eight beams had to be erected and false decking and fascia platforms were installed within that eight-hour closure period. The remaining eight beams, decking and platforms spanning the northbound I-75 traffic lanes were placed the following night.

Both Terex cranes were up to the challenge, and all the beams were positioned within the allotted timeframe. “The cranes offered very smooth and reliable operation, which made them the preferred machines for this job,” comments Smith. “The tandem lift approach was very efficient, which is critical when you are working with Interstate lane closures.”

To help ensure the false decking and fascia platforms were installed within the eight-hour window, C.A. Hull used the 70-ton (63.5-tonne) capacity class Terex RT 670 rough terrain crane to assist with the nighttime beam lifts as well as other lifting needs from the top side of the project. “The RT 670 crane assisted in formwork placement and positioning of the rebar,” says Smith. “We like the crane's mobility for assist work on bridge projects.”

The Terex rough terrain crane combines strength and power with maneuverability. It includes a 111-ft (33.8-m) main boom that telescopes under load to efficiently perform multiple lift tasks. “Operators can choose from three steering modes to reduce turn radius, which is critical on congested construction sites like the US-10 bridge project over I-75,” says Voetberg.

In less than seven months, C.A. Hull's crews transformed the two decades-old, structurally deficient bridges into sound, modern structures carrying more than 31,800 vehicles per day over I-75. The $6.4 million investment in advancing public safety and mobility will pay dividends for decades to come.

For more information on the HC 110 and HC 165 cranes please follow the link: Terex Crawler Cranes