VIDEO: California Surveyor Turns Challenging Trail Expansion Into a Walk in the Park

As anyone in the survey industry will attest, success is defined not by the size of the job at hand but by the accuracies the surveyor brings to it. Truly a game of inches — rather, fractions thereof — the data provided is the foundation upon which the project is built.

No one felt that more than Frank Lehmann. PLS, who, on a recent job to install a bike/foot bridge linking two sections of a damaged hiking/biking trail, saw the entire job riding on his numbers for placement of the structure's abutments. The fact that the bridge had to be flown to the site by helicopter only heightened the anxiety.

In business since 1994, Lehmann & Associates is a survey and forestry business operated by Frank Lehmann, the company's founder and owner. Based out of Redding, Calif., Lehmann frequently serves as an expert witness in court cases dealing with due diligence survey-related matters. However, his other "hat" is that of a traditional surveyor, licensed in California and Oregon, and it was in that capacity that he was called upon for the project described above.

"I was contacted by a group called the Redding Trail Alliance," he said. "The Alliance is a combination of volunteers from the community, as well as representatives from the city, county, and the Bureau of Land Management [BLM], all working together to enhance the city's trail system. Redding already has hundreds of miles of trails running throughout this area and work is always ongoing to link them, make the entire system better, and make it even more world-renowned in that regard."

And with good reason: with 225 mi. of trails within a 15-mi. radius of town, the area is a mecca of sorts for hikers and mountain bike enthusiasts, and while COVID put a damper on most other activities, the trails saw more activity in the past 18 months than ever. At the same time, however, the Carr Fire that ravaged the area in the 2018-19 season made the trails more prone to wear and erosion.

Because of the sheer size of the trail system, it is inevitable that trails will occasionally cross private property, land not managed by the BLM. Such was the case on the project for which Lehmann was called upon.

At its heart was creation of a new section that would realign a portion of the existing Sacramento River Trail, adding a ¾ -mile spur-trail with great views of Salt Creek and the Sacramento River. This new route was required because one section of the original route ran through private property, which the owners were now reluctant to share with the scores of regular trail users. An alternative location was needed.

"Luckily, one of my clients, who is enthusiastic about bike trails, owns a big section of land adjacent to the property in question and volunteered to have some of the trail be placed on his property," said Lehmann. "Doing so would still allow the link to the River Trail to happen. As they were considering it, they were aided, in a sense, by the aftermath of the Carr fire which allowed them to better see the terrain and formulate a game plan.

"In the end, though it was a great choice, it was obvious they would need to cross Salt Creek, a very narrow, rocky gorge, with very limited access. The only way to do that would be with a bridge."

And, while creating the trail itself would be straightforward, getting the bridge staked, abutments constructed and the structure set in place would be anything but.

With an overall plan set in place, Lehmann was contacted by the city of Redding, through its trail coordinator, who asked him to do some preliminary surveying to get things moving for the bridge install.

"My first task was to use a Topcon HiPer VR and data collector to gather the data needed to generate a topo of the area that had been identified as a potential crossing area," he said. "The pressure was on to get that done quickly — it needed to be complete and the design in place in order to obtain additional funding."

With initial work finished and the design complete, the bridge was at last ordered. Built in North Carolina, the 70 ft.-long combination fiberglass and steel structure was trucked out to Redding and stored until it would be needed.

"Those materials, by nature of their ability to better withstand fire, were chosen with an eye toward a future in which wildfires play a likely role," said Lehmann.

No Room for Error

Knowing that the most critical part of his job — construction staking for the bridge abutments — was at hand, Lehmann called upon his Topcon GT-503 robotic total station. Again, working alone but this time using the prism, he was able to lay out the control that he needed, then begin staking out the abutments.

"The specs called for the structures to be 70.14 feet apart with the bridge itself measuring 70 feet long," he said. "Essentially, I had .14 ft. of 'overall give' to play with and still have the bridge fit in. The concern obviously is not only staking out abutments that are a particular distance apart, but also making sure that the lines are truly parallel to one another. The total station makes that a very do-able task."

In his arsenal for about five years now, Lehmann said the purchase was the result of a suggestion from his survey instrument dealer, the Sacramento branch of Engineering Supply Company.

"I'd expressed an interest in a robotic total station to Gary Ochsner at ESC, and he felt the Topcon GT-503 would be a great fit for me," he said. "He was right. I use it in conjunction with a data collector that serves as my GPS controller as well, and it's worked out great. When you are on the end of the stick and you are the only one doing everything, not only is it seamless and accurate, it's what makes surveying interesting and fun."

When asked how different things would have been without the robotic solution, Lehmann said he would have needed a crew of two or three just to deal with the extra gear and the rocky terrain, which would have only complicated matters for him. In one area where he needed to set a control point, for example, there was no dirt at all — just boulders and rocks.

"After identifying the point, I had to use a diamond tip to scribe an X on a rock," he said. "Since working by the stream would have made communication difficult over the sound of the nearby waterfalls, not having to communicate my directions with a crew member was a plus since I was able to control the robotic system from the point staked. So, not only would the costs have been higher to compensate the additional crew members, I think I was far more efficient on my own."

To put the abutment location into perspective, in order to pour the two structures, a concrete pumping truck had to be situated far above the site, from which nearly 400 ft. of pipe was used move the concrete to where it was needed.

With the abutments poured and set, it was time for the bridge installation. Because of the rough terrain and the remote location for the placement, traditional transport such as a flatbed or boom truck crane were impossible. It was decided that the only feasible way to get it to the site was to helicopter it in. Enter: PJ Helicopters of Red Bluffs, Calif.

Using a UH-60 Utility Hawk helicopter, the company airlifted the bridge from its staging area and flew it out to the install site.

"Video shows the chopper flying the bridge in, and ground crew, using lines attached to each corner of the structure, maneuvering it around to get it into position," said Lehmann.

"I'm almost glad they didn't tell me they were setting the bridge that day because I would have wanted to be there and been a nervous wreck. But it fit like a glove, a real testament to the accuracy of the data from the total station. In fact, I went there after the install and found that I could barely get my finger in the gap between the bridge and the abutment on each end — the fit was that close. Kudos to the concrete contractors who did a great job of being able to set their forms and make it comport with what I did."

He also felt it important to mention that PJ Helicopters, aware of the tight budget the Alliance was working with, did their amazing work for less than their normal rates.

"Without their help, I can't see this project having the successful completion it did," he said. "In fact, many of the people involved in the Salt Creek bridge project made financial sacrifices to help make this happen. The Redding trail system just got a bit bigger and a bit better; I was happy to have played a role in helping make that happen." 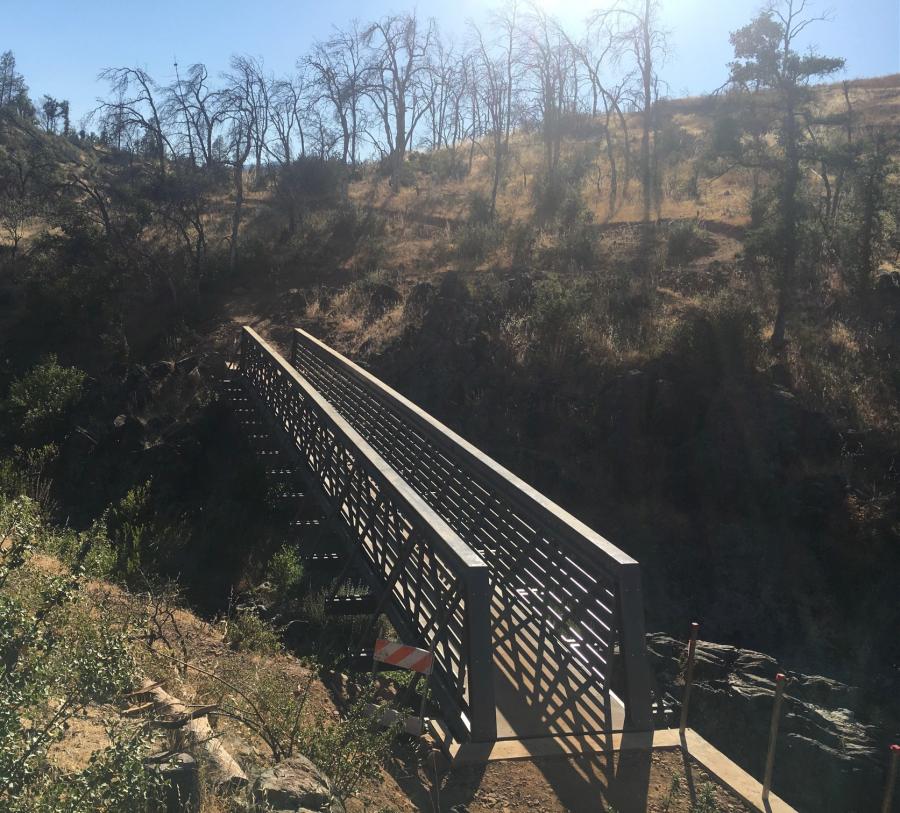 Because of the rough terrain and the remote location for the placement, traditional transport such as a flatbed or boom truck crane were impossible.