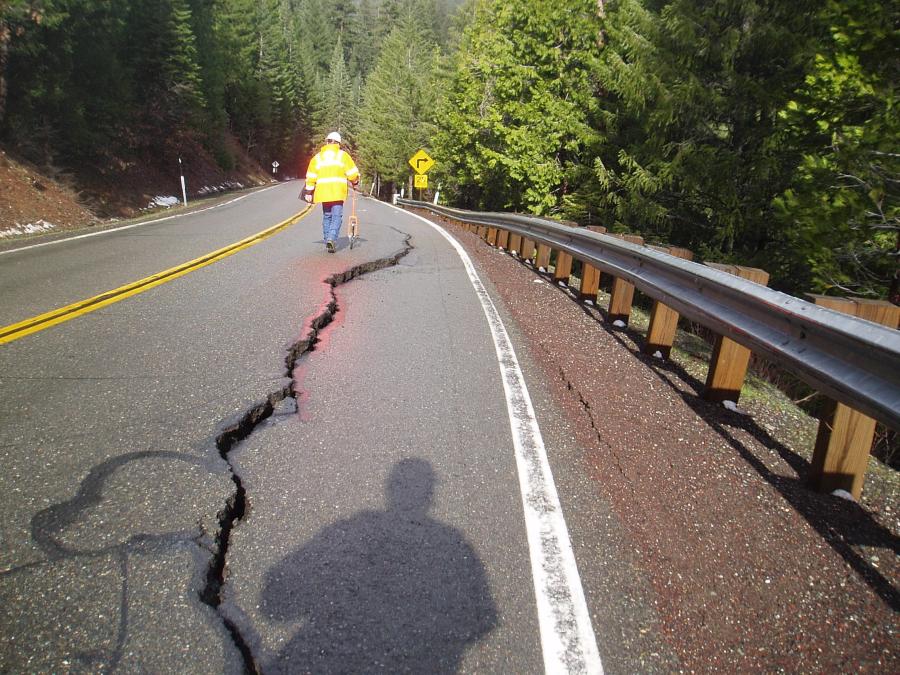 Signs of distress to the roadway appeared on March 14. The road was closed immediately for review.

After sustaining near drought conditions for the last several years, heavy rains took their toll on a section of State Highway 3 at Slate Creek between Weaverville and Trinity Center, Calif. On March 15, two sections of roadway measuring about 100 yds. (91 m) washed away.

A day earlier, saturation and cracks in the roadway were reported to the California Department of Transportation (Caltrans) District 2, who sent a team of experts to assess the conditions. A temporary closure was put into place and crews were onsite when the road gave way. No one was injured.

Caltrans contracted Tullis Inc. of Redding, Calif., for clean-up and replacement of the roadway.

“Tullis pioneered roads to the bottom of the embankment to gain access to the site of the slide,” explained Jeff Bline, Caltrans resident engineer. “Fortunately, there was an existing disposal site within the project limits, which we're utilizing for the rubble.”

According to the Redding Record Spotlight, Don Anderson, District 2 deputy director of Caltrans, said the repair option his agency is leaning toward is backfilling the chunk of fallen highway “with a lot more drainage components.” In a Crossroads newsletter put out by the University of Wisconsin, engineers estimated that at least 90 percent of a road's problems are caused by water. The top three ways to preserve and extend the life of a road, they said, are drainage, drainage and drainage.

Tullis and Caltrans have set a deadline of Memorial Day to have Hwy 3 open “with limitations” to thru traffic. Finishing work may continue past that date. Crews worked around the clock to get detour roads cleared and serviceable for commuters between Weaverville and Trinity Center. Motorists with 4WD are directed to used Trinity Mountain Road/East Side Road between Highway 299 near French Gulch and Trinity Center. Due to tight curves, larger vehicles will not be able to negotiate this detour and instead, are advised to approach from the north on State Hwy 3 over Scotts Mountain Pass. Passenger cars with 2WD should follow the I-5 / Hwy 299 detour.

Local traffic with 4WD is able to use the shortest detour, which bypasses the closure using four service roads and a logging road, cleared and prepped for the occasion. Trinity High School has rented 4WD buses so it can safely and efficiently transport kids to school while Hwy 3 is being rebuilt.

Other roads in northern California have suffered the same fate this winter, including Highway 1 in Mendocino County where a Caltrans truck was nearly pushed off the highway by a mudslide.

Caltrans budgets for such emergencies, allotting $10 million for the clearing and renovation of Hwy 3.