The 77-year-old east span of the San Francisco-Oakland Bay Bridge is being taken down, piece by piece, as part of a Bay Bridge seismic retrofit project. 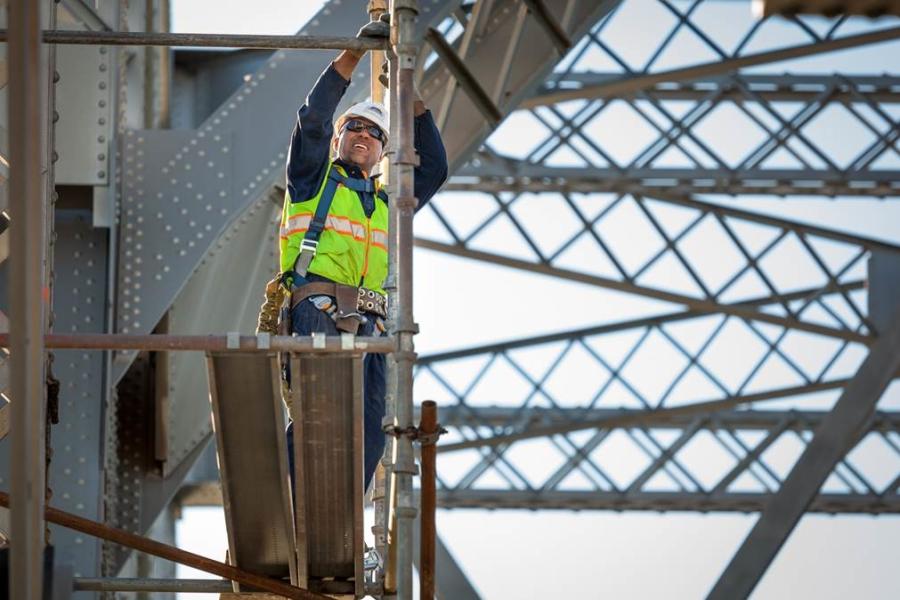 The 77-year-old east span of the San Francisco-Oakland Bay Bridge is being taken down, piece by piece, as part of a Bay Bridge seismic retrofit project.

In fact, the new bridge was designed to be a lifeline in a large quake. It will be used to transport food and emergency supplies to San Francisco or Oakland in an emergency.

The new east span of the bridge opened in 2013. The self-anchored suspension bridge was built at a cost of $6.4 billion.

The truss section is composed of three main parts: the anchor span, the cantilever span and the suspended span. Each keeps the other in balance.

Funding for the project is provided by the Toll Bridge Seismic Retrofit Program, made possible by Assembly Bill 144 passed in 2005. No federal funds are allocated for the project.

The project was developed through a partnership between the Bay Area Toll Authority, California Transportation Commission and Caltrans.

Pieces of the old east span are being removed in the reverse order from which the span was built.

The first part of the demolition process was to cut the suspended span of the cantilever truss at its center in order to begin removing it.

Once the suspended span was gone, then workers began removal of the two halves of the cantilever. They also started dismantling the truss span section that stretched east of the cantilever to the Oakland shore.

Recent demolition included a pier implosion in November 2015. The pier, known as E3, was the largest of the underwater concrete piers supporting the old Bay Bridge east span.

Many people in the Bay Area watched in person, online or on television as hundreds of small charges collapsed the concrete and steel structure into its own foundation.

Also in 2015, workers removed the two-level, five-lane concrete deck on the east span.

The process took place over two days in early February. A second section is scheduled for removal in mid-April.

Removal of a 504 section is immediately followed by extraction of the marine or underwater foundation beneath it.

“Lowering these spans will represent the largest sections that will come down during the demolition of the eastern spans,” said Steve Whipple, principal construction manager in a Caltrans release just before the removal.

The five sections extend about a half mile.

Once the 504s are all removed, crews will begin a similar process of removing 14 288-ft. (88 m) span sections called “288s” that extend to the Oakland shore. Again the sections will be lowered onto barges, but these barges will be designed to handle the shallower water where the 288s are located.

Dismantling trusses is a dangerous job. Removing one member from a truss bridge can change the loads on other members, possibly creating a spring-action effect.

To determine the best way to remove high-tension pieces, engineers are using a 3-D finite element computer program model based on structural analysis and historical records that show how the forces are distributed.

During demolition, crews will monitor the state of the span through a system of 90 retro-reflector prism targets installed at key locations on the bridge. As steel members of the bridge are removed, the updated target locations will be determined and entered into a computer system.

Although the new east span is up and running, the environmental work connected with demolition, continues. Monitoring and mitigation efforts are scheduled to continue well into the future.

The environmental team will work alongside demolition crews to ensure that environmental laws are followed and negative impacts on water quality and fish life are avoided.