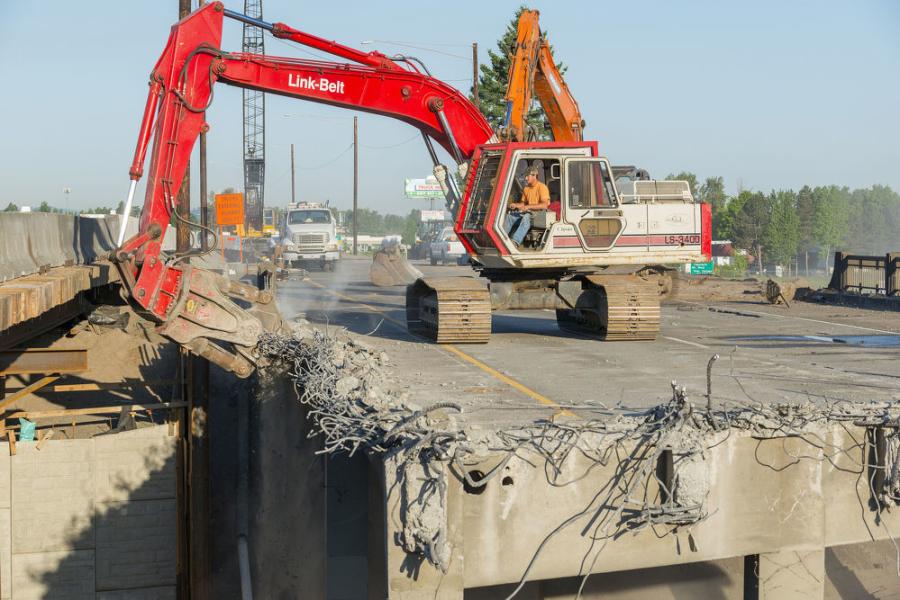 Excavators are key to the demolition and construction of the new bridge.

Carter & Company Inc. (C&C) crews began work on the Oregon Department of Transportation's (ODOT) $18.7M, I-84 Graham Road Bridges Project in the city of Troutdale in February 2019 and are looking at beating the delivery date of December 2020.

Progress has been swift with the new westbound bridge completed last September and the expectation of completing the new eastbound bridge in April, and the Graham Road improvements this spring and summer. The construction zone covers the I-84-Graham Road/257th Interchange.

The plan of attack was based on building a two-lane temporary bridge between the old bridges and shifting traffic onto the temporary bridge while each of the old bridges was demolished and reconstructed. In order to build the detour bridge in the median, Carter & Company had to first install temporary shoring, consisting of steel soldier pile and timber lagging, along with temporary ragwalls, which stayed in place while each of the existing bridges was demolished and excavated. With the help of CAD drawings, they were able to precisely locate their temporary piling and steel beams such that the temporary detour bridge fit between the existing bridges with inches to spare on all four corners.

"This was a pretty tight window to fit our bridge in," said Colby Fleck, Carter & Company's project manager. "We had to adjust the location of stone columns, temporary bridge piling, shoring piling, excavation limits and the detour bridge to fit within the horizontal constraints given, all while maintaining a minimum vertical clearance under the bridge and maintaining pedestrian access. It was quite the balancing act because when you adjust one thing it impacts everything else. This was probably the biggest challenge of this project, but it set us up for success through multiple stages of work thereafter." 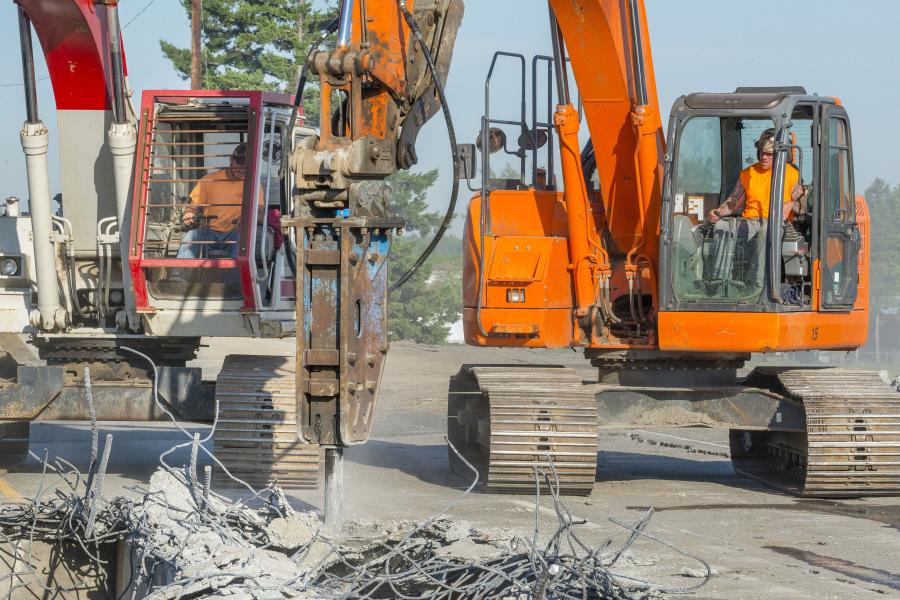 ODOT's Resident Engineer, Region 1 (Portland Metro Area), Chris Aguon said, "We're going to pour the deck on the eastbound bridge deck very soon if the weather permits it. Aguon noted that the new bridges are being built at the same locations as the old ones. "This is standard ODOT bridge construction and thankfully there are not a lot of constraints."

The old, 110-ft. long, three-span continuous concrete deck girder bridges, two-lanes in each direction and with a vertical clearance of 13.5 ft., are being replaced with single span, precast, pre-stressed, and post-tensioned concrete box girder bridges that are 105 ft. long and have two-lanes. Due to their design, they can better accommodate truck traffic and improve overall traffic flow. They will have a vertical clearance of 17.25 ft., bridge lighting, a security fence and retaining walls. The other elements include widening Graham Road from two lanes to three between the Frontage Roads and adding a 10-ft. sidewalk and 6-ft. bike lane on the east side of Graham Road to provide safer access and improved connections for pedestrians and cyclists.

"The I-84 bridges are aging and must be replaced," said Katelyn Jackson, ODOT's community affairs coordinator, Region 1. "In particular, the westbound bridge surface has shown severe deterioration in recent years. The vertical clearance under the bridges is only 13.5 feet which is too short to safely accommodate the passage of large trucks and oversized vehicles. Where Graham Road passes under I-84, there are narrow shoulders and no designated pedestrian sidewalks. Furthermore, the existing two lanes on Graham Road under the bridges are not wide enough to accommodate the increase in northbound traffic, generated by new industrial development north of I-84." 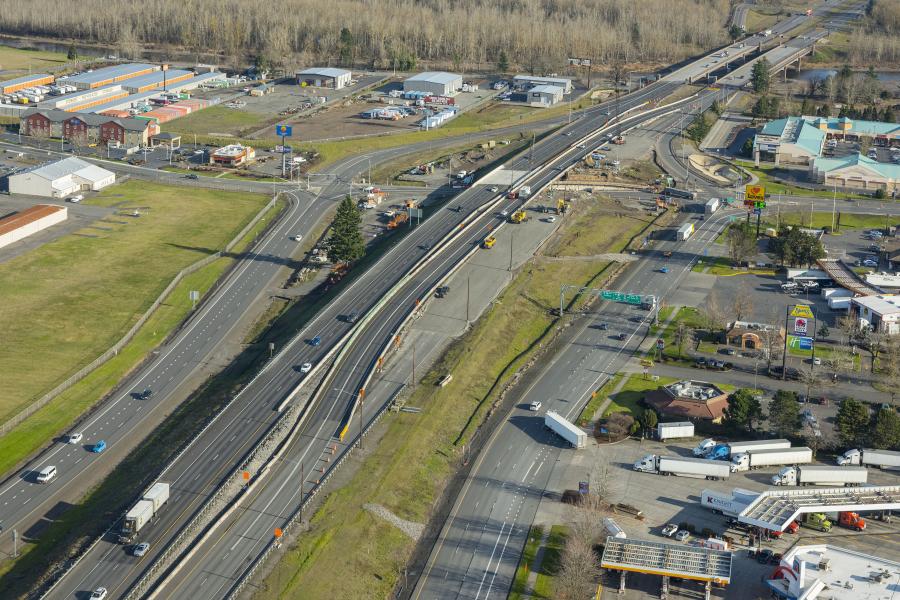 "The new infrastructure will support connections to this important employment area," Jackson said, "and improve safety and capacity for all travelers in the area of this interchange."

A well attended public outreach campaign took place in 2016 to 2017 and the final design for the new infrastructures, prepared by David Evans and Associates Inc. was submitted in July 2018.

"We did what we could to make sure that neighbors and users of this section of the road knew what to expect and what was coming," said ODOT Information Officer Don Hamilton, Region 1. "The height of the bridges is what it's all about. There's been a significant amount of industrial development north of I-84 in this area and Troutdale, including a major Amazon distribution center. There is also a small airport not too far away and the Portland International Airport is about eight miles from the area. All of this is critical for some of the industrial development that we're expecting in the area."

The lifespan of the new bridges is approximately 75 years.

"The design is much more substantial, will last longer and carry more loads," said Aguon. "The girders are stronger than the old ones and the foundations are stout. We have driven pile at the abutments and installed ground improvements around at each end of the bridge. We placed stone columns around the abutments and in the situation where we have an earthquake, they should be pretty stable." 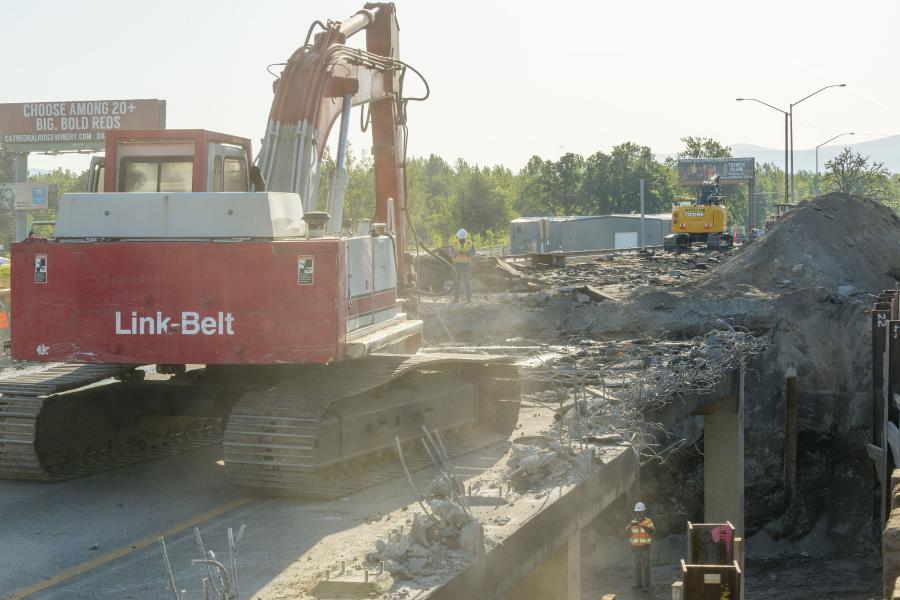 The traffic management plan is based on lane closures and detours, with social media being utilized to inform motorists and pedestrians about weekly construction updates and lane closures.

"All businesses and recreational accesses are expected to be open during construction," said Jackson. "Travelers should watch for flaggers and traffic pattern changes. Detour signs will be posted during roadway closures. Graham Road will require daytime and nighttime single-lane closures between NW Frontage Road (south) and NW Frontage Road (north)."

"Like on any project, traffic is always a concern," said Aguon, "and from the start we put together a plan to keep traffic moving. We have pedestrians coming through the site, trucks carrying freight from Amazon and a couple of significant service stations. It's the last stop before you get into I-84 heading east. It's a good work zone and we've got room on either side of the bridge for the construction."

C&C has maintained a solid safety record on the job site and in terms of utilities, Troutdale has relocated a waterline and Frontier has also relocated a fiber Line.

"They're pretty good to work with," said Aguon. "Colby Fleck, their project manager, is definitely on the ball and keeping the project moving. Stacy Bowers, the project superintendent, is a very experienced bridge builder — he's Johnny-on-the-spot when it comes to planning and executing the work."

The demolition of the eastbound bridge was completed in just over 24 hours between Friday night and Saturday afternoon on the weekend of Oct. 12, with Graham Road closed to facilitate the work. 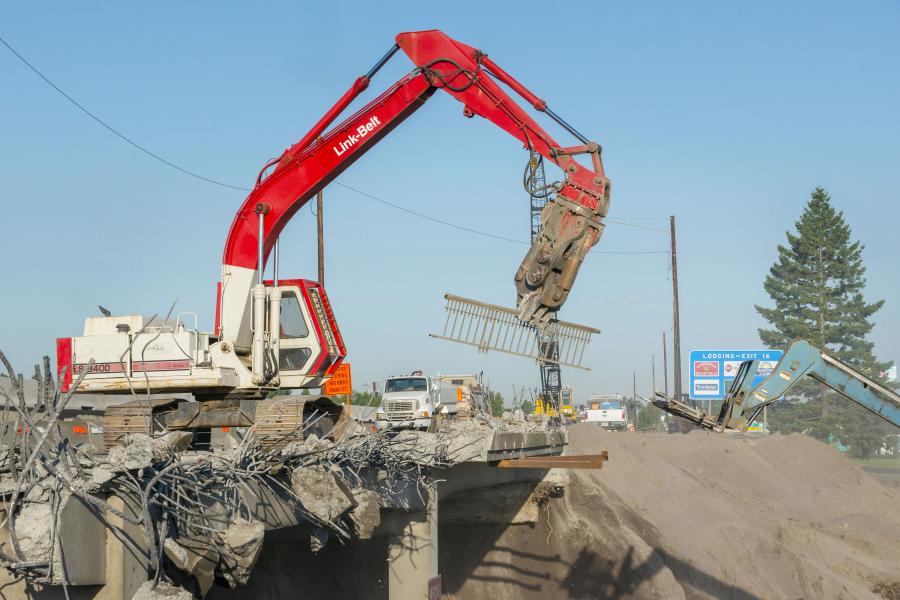 "They demolished the bridge from the top and ends and then worked their way towards the bridge bents," said Aguon. "Once they cleared enough and had the concrete removed from the deck, they moved their equipment down to the roadway below. The material was placed on the road and hauled off rapidly."

A similar plan was followed for the demolition of the westbound bridge, which was taken down last May.

Construction of the new westbound bridge began in May 2019 with crews doing mainly day shifts, with some night operations.

"Seven box girders for each bridge were trucked in and set from the detour bridge with cranes placed on either side of the new bridge," said Aguon. "This was done in the middle of the night with very minimal impact to traffic."

The crews also did some ground improvements — adding retaining walls to either side of Graham Road. There was a substantial amount of work.

Operations to build the new eastbound bridge began last October. As noted, the winter rains will determine when the concrete deck can be poured.

Some of the initial road work has begun, with crews going down to the subgrade to build up the lanes to match the elevation of the raised bridges. Major road work will occur once the westbound bridge is completed. This will include widened roads, the installation of swales, signal upgrades and various plantings.

Aguon is pleased with the progress of the project.

"It looks like they will be ahead of schedule," he said. 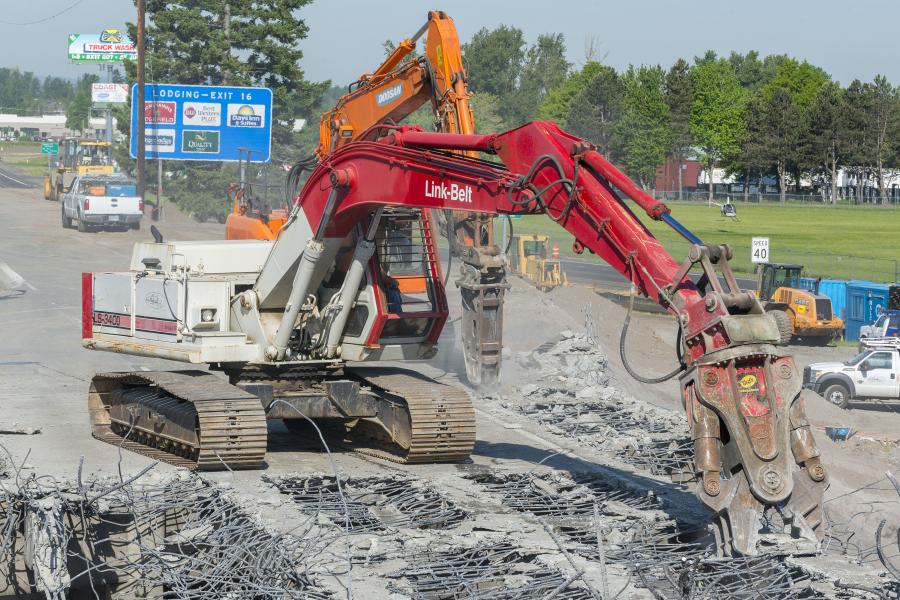 Carter & Company is responsible for the bridge work, Knife River Corp, Northwest for the paving, and Dirt & Aggregate Interchange Inc. for the earthwork and site preparation. Peak days have seen more than 30 construction workers on site.

The amounts of materials being removed and brought in are still being tabulated, with rebar and other materials from the demolitions being sent to recycling centers.

Fleck appreciates the support of ODOT.

"They have been helpful and flexible in getting lane closure outside the times that are shown in the special provisions," he said. "This makes our work more efficient and helps to get the job done."

Dirt & Aggregate purchased a new excavator and a grader for the project.

"We run some older equipment compressor and manlifts, so we do have electrical and hydraulic issues on those," said Fleck. "We have our own mechanic, who has a mechanic's truck to do repairs at our construction sites. Routine maintenance was key to ensuring the cranes and other equipment operated efficiently."

"We didn't rent that much equipment because we own a lot of our equipment and we have a good variety," said Fleck. "If we have too many jobs at one time, then we'll rent. We have our own lowboy and trick drivers and move equipment around to make the best use of it. A lot of the equipment that we bought in the last five to 10 years — Doosan and Takeuchi — has been from Feenaughty. We're on a first name basis with their people. They are very familiar with what we own and what we need. We've had a good working relationship with them for many years." CEG

The other subcontractors include: