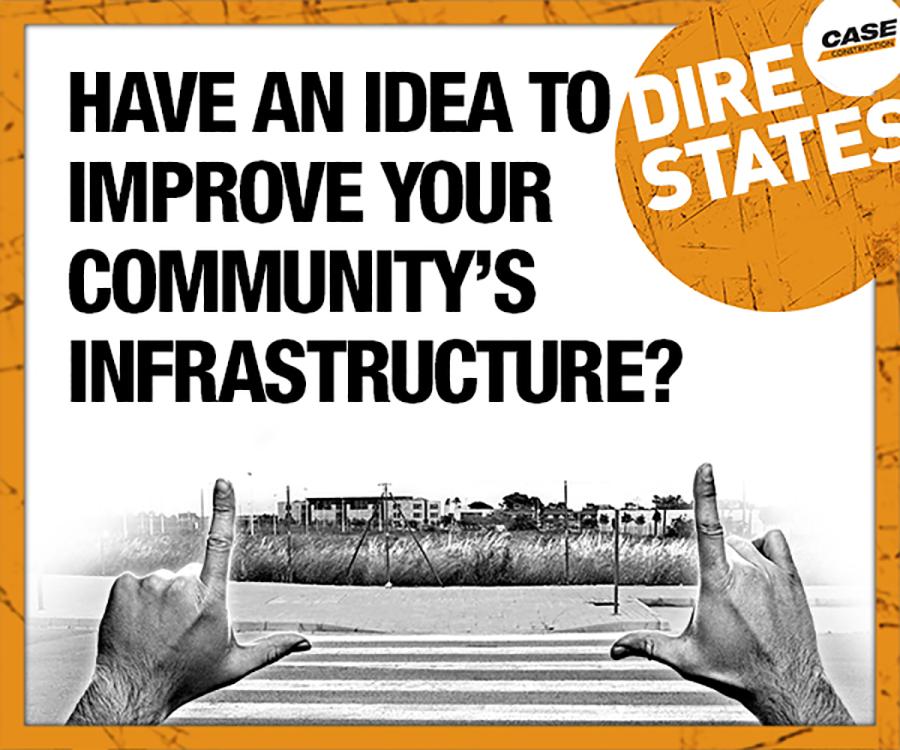 CASE Construction Equipment has launched the Dire States Equipment Grant – a new grant that will provide one winning community with $25,000 in free equipment use to help offset the costs of building or repairing a critical piece of local infrastructure. Representatives of municipal, county and other local governments are eligible to apply for the grant. Entrants will be asked to describe the project and provide a detailed assessment of how that local piece of infrastructure will benefit the community.

Examples of suitable infrastructure projects include: road/bridge repair or construction, utility pipe replacement, erosion control along lakes and rivers, wastewater system improvements and park/recreational construction. All projects that fall within the 16 core categories of infrastructure, as identified by ASCE in its Infrastructure Report Card, will be considered.

The grant is named for CASE's infrastructure awareness and advocacy initiative, Dire States, which evolved from a national tour in 2013 that focused on raising awareness of America's ailing infrastructure into active campaigning for specific programs and legislation. Submissions can be completed at DireStates.com/Grant. The deadline for entry is Aug. 1, 2016, and winners will be announced in September.

“As the Dire States team travelled around the country, it became clear that the margin between whether an infrastructure project becomes funded or is delayed can be relatively small,” says Scott Harris, vice president – North America, CASE. “When you get into small towns and rural counties, those projects often provide a critical service to residents and have a direct effect on their quality of life. Our goal with the Dire States Equipment Grant is to identify one community with such a project, and help them offset those costs to bring the project to completion.”