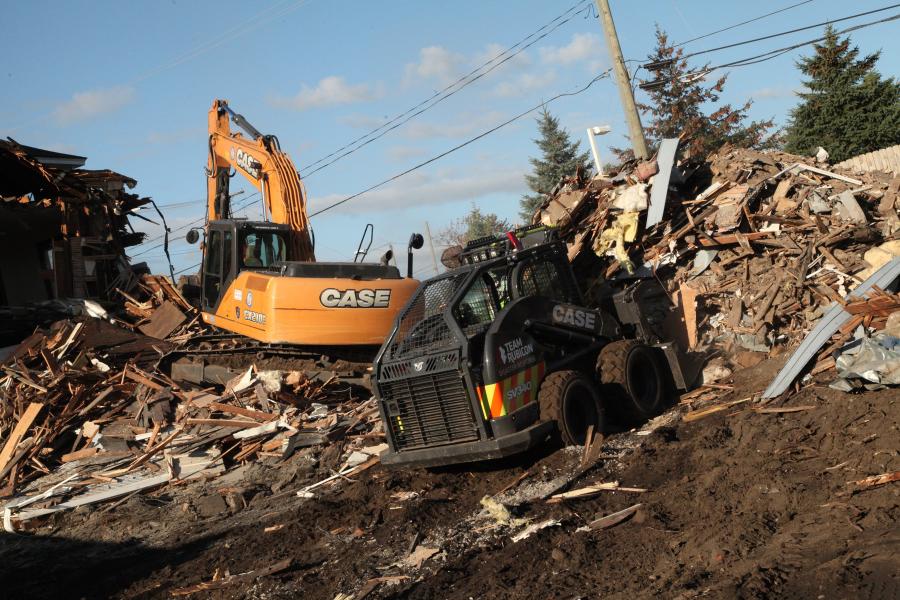 Case Construction Equipment, RPM Machinery, Southeastern Equipment, Habitat for Humanity of Kent County and Team Rubicon teamed up for a heavy equipment operator training and socio-economic improvement project — named Operation Fearless Mary — in the Roosevelt Park neighborhood of Grand Rapids, Mich. RPM Machinery and Southeastern Equipment donated the use of several skid steers and excavators, while Team Rubicon brought in 72 volunteers and 20 new members from across the United States for the operation.

For Team Rubicon — an organization that unites the skills and experiences of military veterans with first responders to rapidly deploy emergency response teams for disaster relief — this kind of training/community service operation prepares their volunteers for operating heavy equipment during deployments, and helps to solidify the humanitarian and relationship-building skills that are crucial in disaster response scenarios. A key component is Team Rubicon's partnership with Case, which provides both training and heavy equipment through its dealer network.

For Case and Team Rubicon, the event also served as a warm-up for volunteers and equipment that were sent to Rockport, Texas, as part of Operation Hard Hustle, a recovery effort related to Hurricane Harvey.

The ongoing project involves the redevelopment of the Roosevelt Park neighborhood of Grand Rapids, Mich. — a large area that had been hit hard by poverty, urban blight and the foreclosure crisis, but is now seeing a strong resurgence due to community involvement. Slated for completion in 2022, the comprehensive renewal project required the removal of approximately 7-million pounds of debris, and upon completion will include single- and multi-family homes, retail, green space as well as a new high school that will house more than 500 students from the local community.

"There's a lot of moving parts to this project and one of them is debris removal," said Cort Beard, regional field operations manager, Team Rubicon, and managing director of operations for Habitat for Humanity of Kent County.

"By the end of today, we will have removed close to 7-million pounds of debris from the work site. That's a significant savings to Habitat for Humanity and the 14 other partners that are involved with this project. To my knowledge, it's the largest-scale project with volunteers leading the way."

"It's been a tremendous experience," Beard continued. "A good estimate is $347,000 given back to the community. When all the in-kind equipment rentals, fuel, volunteer hours, command and general staff, everything is put together, that's a huge savings and that helps Habitat for Humanity continue to grow, as well as Team Rubicon, in the efficiency of what we spend compared to what we leave the community with when we do demobilize."

"What's amazing about this project is that we have volunteers from across the country, 8 of 10 [Team Rubicon] regions are represented, as well as Team Rubicon Canada."

Training for What's Next

Operations like Fearless Mary allow Team Rubicon volunteers to get hands-on equipment training before deploying to real-world disaster response operations. Some of the volunteers that participated in this operation — from both Case and Team Rubicon — transferred to recovery and cleanup operations in response to Hurricane Harvey.

"This operation is the combination of years of planning, relationship building, and watching the beauty of a community coming around a project that leaves a lasting impact here," said Kyle Doyon, incident commander — Operation Fearless Mary, Team Rubicon. "We're here with Habitat for Humanity and with Case and Team Rubicon training our volunteers here in the field, but not in a disaster zone. We're able to do it in a controlled environment, in a safe and slow manner so that when they head down to go down to Texas and down to Florida, they're able to do the work there in a proficient and safe manner where there's a lot more variables than we have here."