CDOT Selects KMP for Denver's I-70 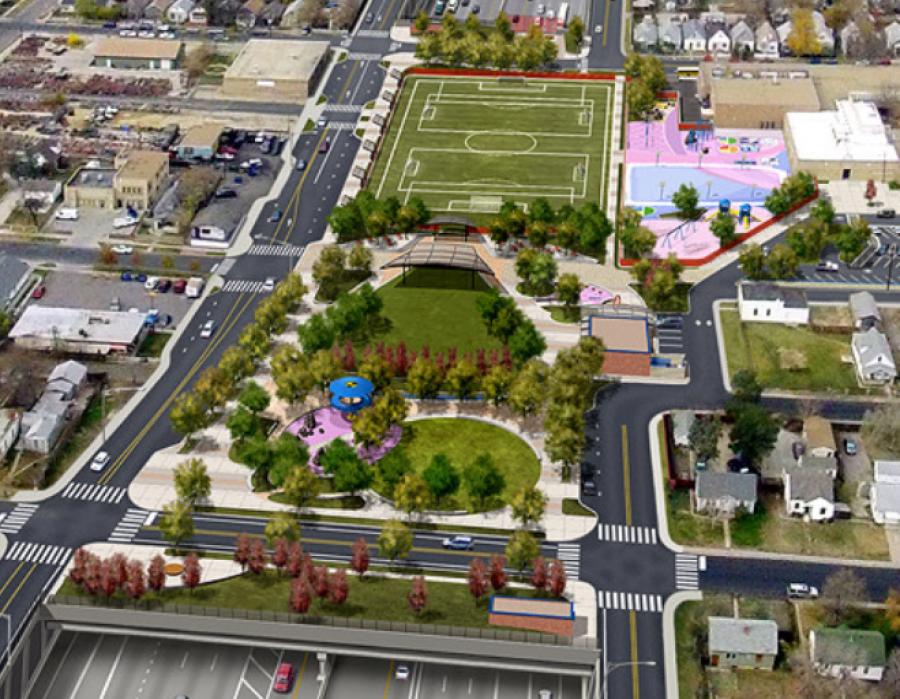 A rendering released in August 2016 shows the section of an expanded Interstate 70 that would have a 4-acre cover on top. (Colorado Department of Transportation photo)

CDOT announced on Aug. 24 that it has selected Kiewit Meridiam Partners (KMP) as the preferred proposer to design, build and finance the reconstruction of I-70 in Denver, as well as operate and maintain Central 70 for 30 years.

KMP brings a proven track record of delivering some of Colorado's largest and most complex projects, including the Denver Union Station transit improvements; I-225 rail line; Pecos Street over I-70 bridge replacement; the U.S. 34 Big Thompson Canyon emergency repairs; and the Transportation Expansion (T-REX) project — CDOT's only other mega-project. Kiewit's 70-year presence in Colorado also includes building the second bore of the Eisenhower-Johnson Memorial Tunnels in 1975.

“CDOT sought a partner that would deliver Central 70 on budget, on time, and with technical excellence and innovation. Kiewit Meridiam Partners has demonstrated that they can meet this challenge while minimizing impacts to those who travel, work and live along I-70,” said Shailen Bhatt, CDOT executive director.

“The ability to address the needs and concerns of the communities most impacted by the upcoming construction also played a key role in the selection of KMP. CDOT's commitments to the community have been at the forefront of this project, and KMP has demonstrated they are prepared to live up to every one of them,” Bhatt said.

“Their construction approach shaves a full construction season off CDOT's construction schedule, and their commitment to hire at least 20 percent of their workforce from the community is backed-up with a strong recruitment and training program. Also, KMP is contributing $1 million for student scholarships and other community programs.”

Additional highlights from KMP's proposal that led to CDOT's selection include:

• Minimizes environmental impacts — KMP's roadway design raises the roadway profile through the viaduct section 12 ft., eliminating exposure to the groundwater table and reducing the amount of soil disruption in this area by 10,000 truckloads of dirt.

• Invests in the local community — KMP has committed to provide $1 million in community investments through its community foundation.

• Proven local entity — KMP partner Kiewit Infrastructure, has been in the Denver metro area more than 70 years and has a solid record of on-time, on-budget delivery for CDOT, including its last mega-project, the Transportation Expansion (T-REX) project.

• Consistency and stability — KMP will oversee all roles throughout the 30-year term of the project, including construction, financing and operations.

“The Kiewit Meridiam Team, including our local business and labor partners, are honored to be selected to deliver this important project. CDOT, the city and county of Denver, and all the stakeholders are to be congratulated for their unwavering commitment to addressing this aging infrastructure with a visionary solution,” said Joe Wingerter, vice president of Kiewit Infrastructure Group.

“The neighborhoods have been extremely patient throughout this process. Now the time has come for this transportation system upgrade — one that will enhance the quality of life, as well as strengthen the region in a sustainable and environmentally friendly manner, kindling overdue opportunities for these neighborhoods, the region and the state of Colorado. We look forward to working in partnership to the deliver the vision.”

Contract negotiations will begin shortly, with KMP expected to be fully on board by 2018, following financial close this winter. Construction will begin in spring 2018, and will take four years to complete under the KMP schedule.

KMP will undertake the largest infrastructure development project in CDOT's history, a $1.2 billion project that will reconstruct a 10-mi. stretch of I-70 east of downtown; add one new Express Lane in each direction between I-25 and Chambers Road; remove the aging 53-year-old viaduct; lower the interstate between Brighton and Colorado boulevards; and place a four-acre park over a portion of the lowered interstate between Clayton and Columbine streets.

In February 2015, the High Performance Transportation Enterprise (HPTE) Board and the Transportation Commission decided to pursue a Design-Build-Finance-Operate-Maintain delivery model for the Central 70 Project. This delivery model allocates risk to a private partner and minimizes cost overruns for CDOT through set performance payments — an annual payment to the private partner that is based on progress and maintenance standards. In this model, CDOT collects any toll revenue from the Express Lanes, infrastructure owned by the state.

“Each progressive version of the project contract has been made available to the public on the project website over the course of the procurement process,” said David Spector, HPTE director.

The selection of KMP is a major milestone in a process that began in 2014, when CDOT first requested that interested teams submit qualifications for Central 70. Four teams — including global leaders in finance, engineering, construction and highway operations — were shortlisted in July 2015, and continued to work with CDOT and HPTE as the draft contract documents were developed. Technical bids were submitted in June, followed by financial bids in August. An extensive technical and financial review began in June 2017.

About the Central 70 Project

The Central 70 Project will remove the 53-year-old I-70 viaduct in central Denver, lower a section of I-70 below grade, and construct a four-acre park over the interstate in the Elyria and Swansea neighborhoods. One new Express Lane in each direction will be added between Brighton Boulevard and Chambers Road. Construction is scheduled to begin early 2018.